I have friends who are Air New Zealand crew (and who shall remain very nameless lest they lose their jobs) but suffice to say, mortification at the new uniform is setting in. 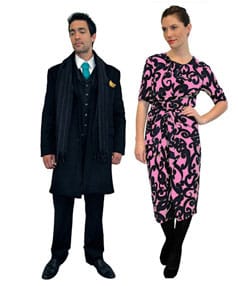 It’s been 5 years since Zambezi whipped up Air New Zealand’s current teal-on-teal uniforms made of silk (girls tops are instructed to be dry-cleaned – easy on an overnight to LA!) and creasey skirts which look oh so sleek after crew rest and soak up splashes of coffee or an accidental lasange lobbed across the trolley, but now they’re being revamped.

VA VA VOOM the brief must have said because Trelise Cooper was given the contract (she of the frills and bold prints) and yesterday a hot pink frock with swirly New Zealandy koru-like paisley’s was unveiled to a collective gasp.

Now I’m usually an objectively positive person. I believe if you look hard enough you can find something good to say about pretty much anything, but I am struggling here. The men’s uniforms look chic – long jackets and while the hot blue tie is like a neon light, I can live with it. At least I’ll be able to identify the male crew from male passengers with that siren around their necks, unlike the current open-necked cream shirt.

But the girls. Oh my. There is also going to be a tailored Tony-Ryall-style pinstriped suit, but apparently Air New Zealand is also rolling out new cabin colours that will match the uniforms in 2011. Imagine pulling your eye mask off to hot pink seats after 12 hours with a sleeping tablet? And pink?! It hardly smacks of New Zealand. More like mardi gras or a cosmopolitan at Soul Bar.