Auckland Scene: Luke Oram had a birthday in the family last week and as the our tradition, they decided to hunt out some nice cigars.

I’ve taken quite a liking to cigars, call me a novice enthusiast. I’ve found that smoking the odd cigar is the perfect rebellion against a harsh Pentecostal upbringing – it’s naughty enough to get a reaction from your mother, but you’ve still got the “at least I’m not smoking cigarettes” defence.

Anyway, the thing I’ve found about cigars is that if you ain’t spending some decent coin, you might as well light up a rod of aged dowel and have a suck on that. 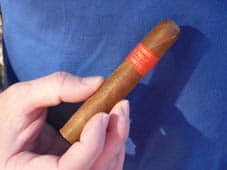 I found these decent cigars at Dominion Road’s Hollywood Dairy while we were living around the corner. They’re well-priced with a vanilla-soaked wood filter at the end, which makes them tolerable to the lady-folk who want to join in. Somehow though, I’ve always felt like I was compromising on candy cigars.

So, back to Hollywood. I went in there last week for the usual fare, and on this fateful night I was greeted by Mohammed, who stopped me at the humidor and indicated for me to follow him behind the fluorescent strips of the Staff Only doorway. I followed him into his backroom, where he revealed his private humidor – home of The Good Stuff; proper Cubans and all that; from the thick Churchill style to the delicious Guantanamera Habana I picked up, for no other reason than it came with it’s own plastic capsule (novice enthusiast, I did warn you.)

Before I left, he gave me a peek at his holy grail – the top shelf of the bottom drawer; kept in a safe below the humidor; the kind of Cubans reserved for politicians, despots and dictators.

Mohammed says his hidden stash is the best range you’ll find round these parts, for the best price.

So, if you have a special occasion, head to Hollywood Dairy on Dominion. Ask for Mohammed, tell him I sent you. He’ll show you the gold.