We leave Brussels nice and early (well the lady-like hour of 9.13am) bound for Paris on the speedy Thalys train. It takes 1 and a quarter hours and we arrive smack in the heart of the romantic city.

The Thalys train serves food (free to us travelling in 1st class including a little champagne of the official variety). It also has free WiFi which you can pay for in economy. It’s brilliant to get all the emails checked, Facebook status’s updated, Tweets Twittered and generally surf around as the countryside blurs by at about 300kph. (Top speed on this train is 545kph and a world record!) 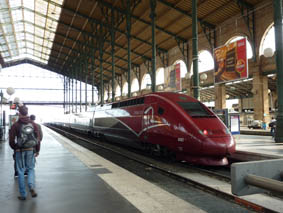 It’s a gorgeous day with green fields, farmhouses, industrial towns and the world in general whizzing past. It’s hard to get a handle on just how fast we’re going until I look up and see a little cesna flying in the same direction yet we are roaring underneath it at a much faster pace.

After checking into the Radisson Blu Hotel on Hausman (which also offers free WiFi) we have snails for lunch at Chez Clement. I know cliche, but when in Rome… 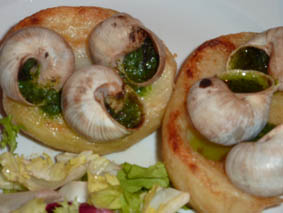 This afternoon we have a walking tour with the dramatic Rita who turns out to be a fascinating and hilarious guide, even bursting into song and humming Tchaikovsky’s Swan Lake as we stand in the very plain basement of the mighty Opera Garnier as she describes the opulent building like the ballet – building to the crescendo in this gold leafed room on the 3rd level.

The grandest building in all of Paris. Don’t miss it!

Opera Garnier was inaugurated in 1875 and designed by the 35 year old Charles Garnier. It’s simply stunning and if you don’t queue for a ticket to a show, I’d thoroughly recommend a guided tour. Sadly the singers were rehearsing when I went so I couldn’t peep at the stage, but the public levels are breathtaking enough just to swan around ala 1875 under more gas lights than in the whole city of Paris.

"Blogging on the tracks: Paris" - What do you think?