Ha – that got ya! The California Academy of Sciences in San Francisco is opening a new exhibition next year all about sex and extreme mating between animals, fish and insects. But it sounds creepily fascinating so I thought you might like to know.

From sex change to cannibalism, the natural world is filled with wild mating strategies. A new aquarium gallery titled Animal Attraction, delves into the science of sex, exploring the remarkable and often surprising techniques animals have developed for attracting mates and producing offspring. 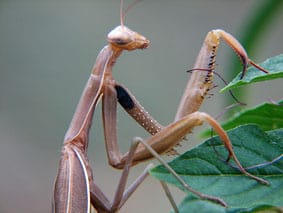 You’ll see hermaphroditic banana slugs, barnacles that win the award for most well-endowed, cannibalistic praying mantises, parasitic anglerfish, and more than a dozen other creatures in a series of 18 tanks that will explore the concept that nothing is more important than reproductive success.  Sex—the passing on and mixing of genes—drives evolution, and is responsible for much of what we consider beautiful in the natural world.  If not for reproduction, plants wouldn’t bloom, birds wouldn’t sing, and deer wouldn’t sprout antlers.

Here’s just a taster of the exhibits being worked on:

Extreme Mating
Truth can be stranger than fiction when it comes to reproductive strategies in the animal kingdom.  When a male Ceratioid anglerfish finds a mate, he literally latches on and won’t let go.  After biting into the female, the two fuse permanently, and the male will gradually atrophy until he’s nothing more than a pair of gonads (what the…??!) This extreme sexual dimorphism ensures that when the time is right, the female has one or more mates at the ready. 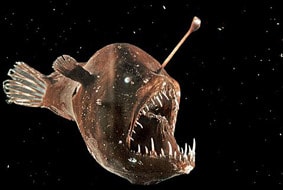 The tiny male attaches to this big girl’s belly to feed off her blood until atrophies and becomes a wart!

Dangerous Sex
Courtship is often at odds with survival. But the need to find and seduce a mate is one of the most powerful forces of evolution. In some species, like the praying mantis and salmon pink birdeater spider featured in the exhibit, females will sometimes devour males before, during or after copulation, a practice known as sexual cannibalism.  For coral banded shrimp, also on display, the trick to a monogamous relationship is fierce aggression toward others of the same sex.  Living in pairs, these shrimp will fight their mate’s potential suitors to the death.

Animal Attraction opens at the California Academy of Science on Saturday, February 11, 2012, with a sneak peek during NightLife on Thursday, February 9.