Off the highways and by-ways of rural New Zealand are all sorts of amazing little gems to pop into for a homemade scone and a cucumber sandwich.  I’m staying in Hawkes Bay for a couple of weeks so it was decided that a Ladies Who Lunch-Alot was required in the famous homestead of Oruawharo in Takapau. 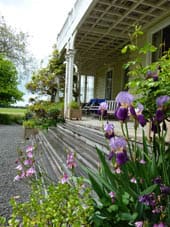 Tea on the veranda

From Havelock North we set off an hour before we were due for lunch taking the quickest route along State Highway 2. You can duck and weave too through surrounding farmlands, popping out at Waipawa for a nosey through some antique shops, but a GPS or a jolly good map is advised.

Oruawharo homestead is one of New Zealand’s treasures. Built in 1868 of entirely native timber – matai, totara and rimu, the surrounding Oruawharo station was a WWI territorial army camp and a pivot for Victorian and Edwardian gentry.

The current owners, Peter and Dianne Harris, bought the historic home that had been neglected for so long it had wisteria growing through the inside and intend to fully restore it. They’ve spent about $4 million on the 67-roomed home so far and (alarmingly) still have a lot more to do. About a quarter of a mil went on just burying the overhead power lines to remove the eye-sores. They have restored and handpainted ceilings, and this year plan to rebuild the entire veranda the old-fashioned way with no nails. It has 16 chimneys and here’s a quirky tidbit, they discovered live bullets embedded in the walls which were to act as fire alarms. Should the wooden building catch alight shots would explode waking the household. 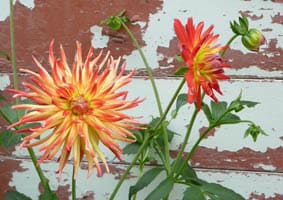 Look at these dahlias!

The Harris’s intended for stately Oruawharo to be their retirement folly, as Peter described it, but when people started to inquire about the refurbishment and whether they could have weddings there, a burgeoning business began. Last weekend they had a wedding set up in a marquee on the front lawn while we 4 ladies, dressed in our finest, took tea and sandwiches on the veranda.

We sniffed at least 4 varieties of infused teas made especially for them that looked (and smelled) like huge tins of pot pouri. I settled on black tea with peach blosom, mum chose Rooibos Peach Nectar, Kate and Kyleigh shared a pot of Green Sencha Lemon and Ginger. A 3-tier cake plate arrived with yo-yos, chocolate afghans and shortbread and separate fine china yielded hot mini mince pies and quiches along with freshly made scones from the gigantic AGA and homemade jam and cream along with salmon and cream cheese, ham and mustard and of course – pinkies out for cucumber sandwiches on crustless white bread. 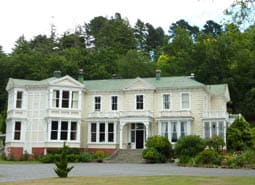 They are also a member of WWOOFing – Willing Workers on Organic Farms where workers come from all over the world and become part of the household, sometimes for months at a time, helping in the gardens, carving wooden furniture in the workshop and helping to restore the home.

Cost for lunch $20 each. Hugging their 3-legged Birmese cat – priceless.