Melbourne Scene: When I picture ancient Egypt the colour palette is particularly beige, dotted with sparse green and a long blue sliver of the Nile passing through. But Tutankhamun and The Golden Age of the Pharaohs, rages a riot of colour and life across that distant, intangible image. 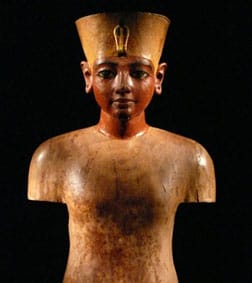 Pieced together by the National Geographic Society, the exhibition at the Melbourne Museum comes from Cairo and details life in the time of the 18th Dynasty and of a nine year old boy (born 1341 BC) who became Pharaoh and was worshipped as his name sake, Tutankhamun – “the image of the living God”. The ten tomb-like exhibition rooms bring you face to face with history and into daily life in Egypt with vivid turquoises, rich greens, burnt terracotta and as Howard Carter, Tut’s discoverer, so precisely said, “everywhere, the glint of gold.”

Walking through it’s almost impossible to believe that the sculpted eyes of ancient gods and goddesses such as the beautiful Nefertiti, and the hand carved chairs with worn, woven seats are over three thousand years old.

Though the gold which glitters amongst ancient precious stones and on carved ornaments left me wondering if perhaps Midas had in fact been an Egyptian mummifier, what struck me most is the sheer humanity captured in the glass cabinets. The small hand carved wooden children’s games and toys which Tut, who died mysteriously aged nineteen, was buried with and his two tiny mummified stillborn children, adorned with all the delicate care of the Pharaoh himself made what I once imagined a rigid, lost civilization, a startlingly 3D, so-tangible-I-could-touch-it society.

Egyptians had an inseparable bond with beliefs of an “afterlife,” and this focus on the life to come greatly affected how they lived in the flesh. One belief in Egyptian tradition was that “to speak the names of the dead is to make them live again,” and though perhaps not the afterlife they envisaged all those years ago, it has in a way proved true. Through Tutankhamun and The Golden Age of The Pharaohs these gods and goddesses truly do breathe second life.

Tutankhamun and The Golden Age of The Pharaohs is on at the Melbourne Museum (direct from the Cairo Museum) until December, tickets available through www.kingtutmelbourne.com.au and with over 350,000 sold in the first two months alone, I recommend you book soon!