I’ve just slept in a hotel bed that doesn’t have a linen history! Quite a spooky thought when you allow yourself to go there… but that pillow you cuddled in your comfy hotel room last week? That was cuddled by someone else only the night before, and someone else the night before that, and … you get the drift.

If you’re frequent a traveller you just have to suck it up and trust that at least once a year the pillow and mattress protectors and duvet covers get a wash. Gulp. Alternatively you could travel with your own pillow. Or better yet, you could stay in a brand new hotel. 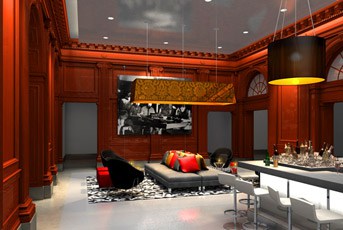 Le Meridien opened in Philadelphia in May 2010 – two weeks before my arrival. It’s a stunning 4-star hotel with very modern/styley decor set in the historical YMCA building that was built 100 years ago. (Boffins: it was designed by Horace Trumbauer – the same architect who also worked on the Philadelphia Museum of Art.)

I walked at nearly midnight after my flight from Orlando and was suddenly standing in the buzzing lobby bar where music played and drinkers drank. It was a little bewildering feeling like Mary Poppins with my suitcases. But no one minded me and I was quickly directed left to the discretely hidden reception area and checked into one of 200 rooms. 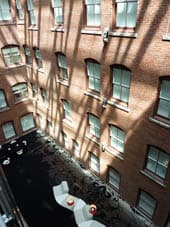 The hotel smells so new and I love the textured white wallpaper in the hallways – and made sure I didn’t bump my bags into them. When you get out of the lift you are in an atrium surrounded by exterior walls and windows that now has a roof overhead way above and the rooms wrap around it.

The bedroom decor has been designed to be as much art as the contemporary art on the walls. Dramatic red curtains against white walls, large overhanging lamps, lacquered black and white wardrobes and desks. Yes this is an arty hotel and your room key will also give you free access to the Institute of Contemporary Art too. Nice.

The lobby doubled as a great meeting spot with a glass of coke in the afternoon (oh it’s not all glamorous travelling you know! I took notes about the Mural Arts Program) and in the evening the bar with its sexy low lighting was the perfect stop for a nightcap (ok, we did finish the bottle of Dow’s port, but it wasn’t completely full!).

An indoor basketball court was where the restaurant (called Amuse, after the French word amuse-bouche, meaning little tantalising tastes to amuse your mouth) now is. After the ‘Y’ cleared out, this building became the District Attorney’s office in the 1980s and today is a brilliantly central hotel on Arch Street looking right at the door of City Hall. Across the road is the famous LOVE park with its statue and fountain and only 2 blocks to the left is Reading Terminal Market for a cheap and cheerful breakfast. 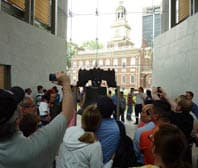 Can you see the Liberty Bell amid the melee?

In fact walking in Philadelphia is very easy – we walked to Rittenhouse Square for lunch in a French bistro then down the parkway to the Philadelphia Museum. We also hiked back the other way the next day to ogle at the Liberty Bell (along with 476 other people). In fact we walked a lot. You do that here. But at least Le Meridien is a nice central pivot point.

Or read my post on the spooky Mutter Medical Museum in Philly!