It’s not often a girl gets to invent her own gelato! But today, thanks to the very cool owner of Giapo on Auckland’s Queen Street, the Blogger at Large Apple Crumble with Lashings of Cream gelato was launched. Gianpaolo Grazioli is a fair dinkum Italian so he knows a thing or 2 about making ice cream. 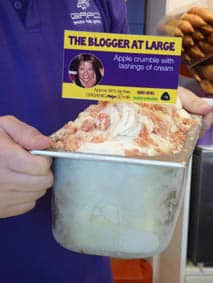 Hurry before it sells out!

What’s the diff between ice cream and gelato, you ask? Ice cream made by the big guys has to have lots more fat and preservatives in it to last as long as it does (we’re talking months). Gelato is typically made and eaten within a couple of days, therefore requires less fat and preservatives. In fact, MY Blogger at Large gelato (for large bloggers and those who want to be) is also made with organic apples so it’s practically a weightloss food…

He boiled the apples with sugar and cinnamon and added it to a gelato milk base, made a separate cake, then broke the cake into crumbles and added a few bigger pieces of apple into the mix.

Mind you, I did find myself partial to the pavlova gelato too. Uh oh, I see a repeat visit coming up. Interestingly, Gianpaolo is exercising a bit of host responsibility and starting Tuesday night running groups for all those podgy gelato eaters! (I’m busy Tuesday.)

Oh and being that today is St Patrick’s Day he’d made a Guiness sorbet. Totally tasted like frozen beer.