Friends and Romans… you now must cover yourselves to enter the Vatican City or the Swiss Guard will run you back across the border into Italy. 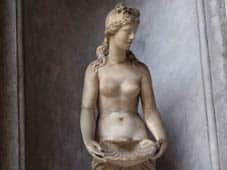 It used to be that you had to cover only your knees and arms to enter St Peter’s Basilica, but now, even if you’re just wandering the streets of the world’s smallest state looking to buy an espresso, you must be modestly dressed. Shorts and tops or dresses that don’t cover arms will be banned – a great opportunity for entrepreneurial types to set up cardigan shops at the city gates, I would have thought.

Locals are particularly miffed as they now cannot swan about in the same attire as they do in Rome (just across the street). And a few oldies are hopping mad because they trek here from all over the place to get cheap pharmaceuticals. Apparently it’s cheaper to get your drugs from the papal state than the surrounding Roman streets. Ahh, but I did read they were able to buy scarves nearby. How convenient.

By the way, if you’re wondering why it’s the Swiss Guard enforcing this new law, it’s because 110 of them look after the pope – the only international dignitary defended by the Swiss outside of Switzerland who are otherwise a neutral country. (See my post about the killing of 600 Swiss Guards in Paris that made them become “Switzerland” and not take sides in war).