I just saw the movie Couples Retreat (with the spunky Vince Vaughn) which is set on the idyllic Tahitian island of Bora Bora. It was hilarious. I’m not one to laugh outloud in movies, but this one had me audibly gaffawing.

Yes Bora Bora is designed by God for couples, but sometimes the lure of a trip to an overwater bungalow – even if you’re not a couple – is too hard to resist… 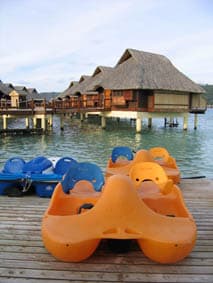 Even the water sports are designed for 2!

I was invited by Tahiti Tourisme to visit and I certainly wasn’t about to let the lack of companion hold me back! But the bottom line is this: everyone arrives on Bora Bora in pairs. It’s like Noah’s Ark. I was the only soloist at breakfast at the Bora Bora Lagoon Resort and Spa and all eyes fell upon me as they murmured their speculation that I must have surely been jilted at the altar but thought, bugger it, I’m going on my honeymoon anyway.

In fact a lady did just that here recently and instead of moping in sadness at her sudden single status on this island of love, she had a ball and did all the excursions she and her clearly undeserving ex had planned. 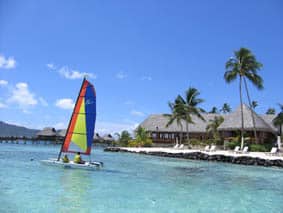 You and your true will love this

Bora Bora is the name of the gigantic lagoon encompassing several islands and also the name of the largest island in the centre which you can go on jungle hikes over and around. If you can picture one of those kitsch chip-n-dip bowls – that’s what Bora Bora originally looked like. The volcanic crater (where God’s chips went) is slowly sinking over millennia, but what is left of the inner ‘dip bowl’ is where the main island of Bora Bora is. The outer rim of the reef is dotted with islands so small that they don’t even feature on a world map.

The airport sits on one such island, barely big enough for a landing strip where boats glide into piers beside the luggage rack while resort personnel locate their guests and mark them with their hotel’s personal lei. Once the bags were loaded we hurtled across the lagoon to dots on the horizon that turned out to be the thatched roofs of over-water bungalows – and yes coffee tables with glass tops so you can peer at the fish below. 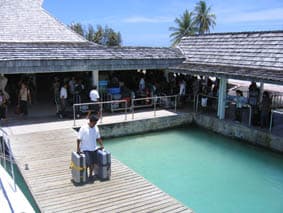 So enchanted by the fish I was, that I donned the provided snorkel and goggles in my room, climbed down my ladder and went swimming with them, looking up into my room through the clever coffee table.

A free boat takes you across to Vaitape Pier every hour. There is a craft market here selling handmade pearl and shell jewellery and colourful sarongs. The single road that wraps around the island is edged with more souvenir shops and expensive jewellers selling Tahitian black pearls in handmade settings. I declined a trip to the Pearl Farm after I met several new husbands who had bejewelled their princesses in pearls and bought matching leather strapped pearl chokers for themselves. Instead I spent the afternoon snorkelling with stingrays and ogling tropical fish with three loved-up couples. And like Vince Vaughn and Jason Bateman, I too swam with sharks. They may be harmless reef sharks but it is quite hard to set that straight in your brain for the first little bit!