If you haven’t been to Perth for a while – or ever – there is a new buzzing bar scene you need to check out.

Thanks to a new law passed to allow premises to serve booze without meals, small bars, eclectic bars, bars hidden in lanes that you’d never find, have flourished. Each one is unique and you can take an organised bar tour (like I did) or just head off on your own exploration.

I met the studly Ryan Zaknich, owner of Two Feet and a Heartbeat, and followed him around. But not in a stalkerish manner. You see he and his mates are local lads (and ladettes) who know all the best spots and have tailor made a tour through Perth’s new laneway bar scene, peppering their commentary with snippets of fascinating historical facts.

I did my tour during the day to get a feel for the place, but they’ll also take you actually drinking if you feel the need for a chaperone. (And I would say to the ladies, book it.) 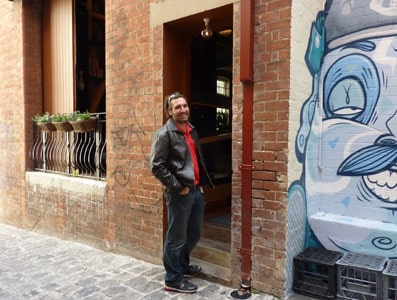 Ryan leads the way into Helvetica

Here are some of Perth’s best small bars to check out.

A rather boring font, but walk along the bricked alley, past rubbish bins and graffiti art, slip inside the door with ironically no discernable signage and you’re there. Its retro themed with a wall of over 100 whiskies, cocktails and ever changing wine list of boutique wines by the glass. There’s likely to be a line outside on Friday and Saturday nights, but worth the wait.

You’ll have to go looking for this place. But when you get to Ezra (named after the poet of last century), after navigating some derelict laneways, you’ll find the arty set sitting on old church pews against exposed brick walls. It’s eccentric (try a beer from a brown paper bag and cocktails served in jam jars, speakeasy style) but the cocktails are worth writing about. Try a peach bellini for something gentle, or for a kick, the Hemmingway daiquiri with fresh grapefruit and lime will purse your lips. 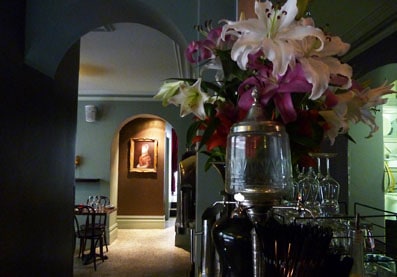 Moody Andalaz with a touch of class

In the bowels of the historic Parker and Parker building, Andaluz is moody, dark and crammed with rich, sumptuous furniture and vases of fresh flowers. Even by day its hidden nooks were easy to get lost in. The entrance, via a back alley, doubles as a tiny narrow courtyard for outside imbibing or nibbling on tasty tapas plates.

Five is a cab ride away from the CBD in Mt Lawley (the Ponsonby of Perth). It has a relaxed, eclectic vibe with chandeliers, leather chairs and wallpaper juxtaposed against concrete walls with an African print pool table. It’s tiny and numbers are restricted, but the upside is it’s not too noisy so you can actually talk to your friends rather than just nod – although that was day time.

When a restaurant doesn’t list prices on the menu, you know you’re in a level of posh that you either must embrace or run from as quickly as possible. 1907 is that place. Perfect for a special occasion. The decadent and chic cocktail bar in the basement of  this 100-year old former rag trade factory is worth coming for alone. Think old Hollywood glamour in the main restaurant – and try and get one of the cosy booths.

Again, just when you think you’ve taken a wrong turn and headed down an alley that only dump trucks visit, Cheeky Sparrow appears. This new bar also doubles as a café to grab the morning foot commuters, so when we visited we grabbed said caffeine fix and took note of the décor. It’s on two levels, lots of wood and some crazy light shades with, you guessed it, a big sparrow painted on the wall. The charcuterie boards and pizzas ably accompany a cocktail or two before heading down the next alley.