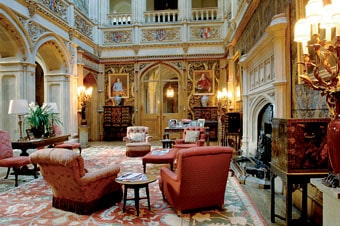 Even people who’ve been living in a cave for the last year and have never heard of Downton Abbey wouldn’t be able to keep from gasping with delight at their first view of Highclere Castle, near Newbury in Hampshire.

Tall and square, with towers, pinnacles and a flag, built of mellow golden stone and set in acres of green parkland dotted with venerable cedars of Lebanon, it’s ridiculously photogenic: which is clearly a major reason for its choice as the location of the fabulously successful TV series now screened in over 100 countries.

The irresistible upstairs-downstairs soap opera set in the early 20th century has made millions of viewers familiar not only with the gorgeous exterior of this ancient seat of the Carnarvon family, but also with its possibly even more stunning interior. The Castle, pre-Downton, was already a popular wedding venue — Jordan/Katie Price’s ill-fated marriage began here, a symphony in pink including the two thrones, all to the tune of $1.1million — and received a steady stream of day-trippers, but the popularity of the series has been a huge boost to visitor numbers, and when I step onto the marble-mosaic floor of the pillared entrance hall, the place is buzzing. Lady Carnarvon herself is there, keeping an eye on the smooth running of her business, and she tells me that the series creator, Julian Fellowes, is an old family friend and a frequent guest at the Castle: “He knows all our stories”. 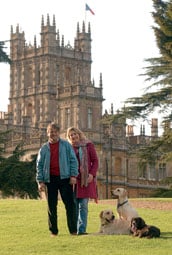 Lord & Lady Carnarvon pose in front of their home

Highclere was used as a convalescent hospital during the First World War, just as Downton Abbey was in the second series, and the lady of the house in those days was also an American; but the 1300 years that there has been a house on the site (the current building was remodelled in 1842 by Sir Charles Barry, who designed the Houses of Parliament) have generated far more stories than Fellowes could ever hope to use.

Down in the cellar, though, there’s an exhibition of Egyptian artifacts brought back by the fifth Earl of Carnarvon who with Howard Carter discovered the fabled tomb of Tutankhamen in 1921, and I wonder if that tale will work its way into a future series of Downton.

It’s fun to spot the locations as I trail through the three floors of public rooms, from the soaring saloon with its ancestral crests to the library’s 6,000 gold-tooled leather-bound books to the bedrooms along the gallery upstairs; but there are riches to marvel at too. The dining room, where the table seats 24, is dominated by a huge Van Dyck portrait of Charles I; in the music room there’s an ornate mahogany desk that once belonged to Napoleon; and everywhere there are paintings, clocks, statuary, china and furniture to admire. Even so, it’s the framed family photos on the sideboards that catch my eye: there’s the Queen, the Duke, Charles and Diana.

“Oh yes, most kings and queens have stayed at Highclere,” Lady Carnarvon tells me airily. Even reality seems fictional here.

Highclere Castle is on the border of Hampshire and Berkshire near Newbury, a 90-minute drive along the M4 from London: take Jct 13 onto the A34 south and follow the signs to the Castle. There is no public transport to Highclere from Newbury. The Castle has a café and gift shop, and entrance includes the extensive grounds and gardens. It is open 11am—6pm from Sunday to Thursday in summer, July to September, as well as throughout Easter and on the May Bank Holiday weekend. It is occasionally closed for filming or weddings: check the website www.highclerecastle.co.uk.