We all have our pet peeves when it comes to fellow passengers and their irksome habits. 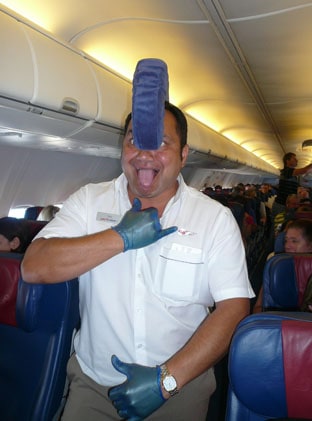 My first flight on Pacific Blue with their crazy hostie

Take asking you to get out of your seat just as you’ve got comfortable with a hot drink so they can use the loo. Or the ones that sneeze louder than the plane engine when you’ve gently lolled off to sleep and if it weren’t for your seatbelt you’d suffer an injury. And why oh why can’t men SIT DOWN to pee in flight. There’s turbulence people!

But despite the belief the flight attendants are there to be seen and not heard/serve and not complain, they have their list of Top Peeves about you (hopefully not me).

I have friends who are crew and one of the things they really hate is when people don’t give them the courtesy of watching their safety briefings but continue reading or talking. You know they won’t rescue you should the plane go down!

Here are a few more of Top 10 hostie hates that travel site Jaunted has released from flight attendant Sara Keagle:

1. The Manner-less: Just a “please” and “thank you” goes a long way in our world. We hear “what ya got” and “gimme a coke” far too often. Also, if we offer a meal choice and they don’t like it, it’s okay to just say no thank you; only five year olds wrinkle up their nose and say “ewww.”

3. The Pen-forgetter: Passengers that leave home without one are particularly annoying, especially on an international flight with forms to be filled out. And, yes we know you are glaring at the pen on us when we say no we don’t have one. Flight attendants are required by the FAA to have a pen on them at all times.

4. The Smartphone Addict: Those who insist they’re about to turn off their phones even after we’ve already asked numerous times usually reply, “I know! I am turning it off!” But they’re not—they’re texting and it’s not like we can’t see that.

5. The Thirsties: They need a drink of water as soon as they board the plane and need to use the lav just as urgently. We understand there are close connects and exceptions, but most passengers have been sitting out at the gate area with ample time to use the restroom and get a drink of water.

7. The Trash Collector: It’s super gross to be handed trash during in-flight service, especially when they blindly put it wherever, like in our ice. And let’s not talk about handling dirty diapers or wiping their nose or face and then trying to hand us the tissue.

8. The Free-for-all Parent: Passengers that let their kids run wild on the plane and then expect and ask the flight attendants to watch them are of course expecting too much.

9. The Dare to Barer: Perhaps this type of passenger shouldn’t bother us because it’s a personal choice thing, but they do. We’re talking about those who use the lavatory in their bare feet. Maybe it’s because we care so much about the well-being of our passengers?

10. The Coffee Snob: It’s a safe bet that passengers probably didn’t have breakfast with their flight attendant, so you need to let them know how you take your coffee. If they’re picky and don’t indicate their preferences, there’s no reason to get mad. 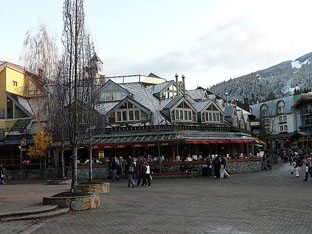 Whizzing from Whistler to Blackcomb by gondola
← Read Last Post 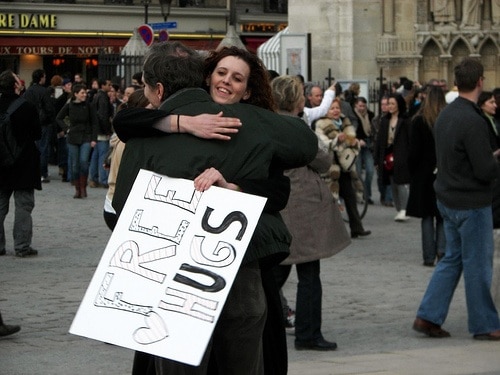