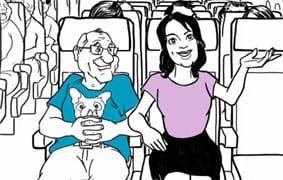 You gotta feel sorry for airline crew who patiently do the actions through tediously boring safety videos that no one bothers to watch.

My friend who is airline crew (for an unnamed airline) says they make note of which ones who watch and the ones who don’t and decide who they’ll help in an emergency!

So how to remedy this important re-takeoff tedium? Make it interesting. Throw in celebrities. Paint your naked bodies, do jazzercise, add All Blacks. Or this latest one from Air New Zealand which is a series of rapidly sketched cartoons to the voice instructions from Melanie Lynsky (Heavenly Creatures/Two and a Half Men) and Ed O’Neill (Married with Children/Modern Family).

Get your eagle eyes on and watch out for our Olympic athletes and a nod to Barack Obama’s gay marriage bill, All Blacks, Snoop having his ciggie taken off him and more that I probably didn’t spot.

Have a look at Air New Zealand’s latest offering and get the jump on how to get yourself flight ready for your next take off.