The proliferation of fake handbags is not just in Asia, as a recent visitor to Venice just found out – after getting fined 1,000 euros for buying a fake Louis Vuitton. 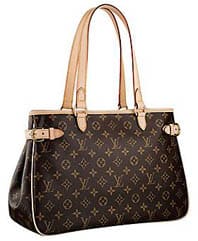 I visited Rome with a girlfriend a few years ago and we made the grave mistake of looking at (and picking up) a bunch of fake Louis Vuitton and Gucci handbags to have a better look. Yes, we were interested in purchasing, but decided against these particular ones. Oh no we didn’t, thought the vendor who had recently arrived from Morocco to make his fortune in fakery. “I make you special deal!”

We said no thanks and proceeded to move on down the street only to have him follow us, loudly expounding the handbag’s merits. We walked a little faster. So did he. We split up. I ducked into a clothing store and quickly hid myself behind a rack as far from the front window as possible. My friend dashed off in another direction. By this time the desperate vendor had his entire fake handbag collection wrapped in a sheet and was walking the streets of Rome like Father Christmas, except not as jolly. Suffice to say we lost him.

Unfortunately a woman in Venice this week wasn’t quite as lucky. The Telegraph reports that a 65-year old tourist from Austria was pinged with a 1,000 euro fine in a summer crackdown to run the fakers out of town. They have police officers using high-powered binoculars who spotted her buying a €7 Louis Vuitton purse and down they came to nab her. Mayor Francesco Calzavara wants to stop the demand for these bags and I suggest with this sort of drastic fine, he just might.