Named “rat’s nest” by de Vlamingh who landed on this little piece of paradise off the coast of Perth in 1696 and wondered what on earth the rat-like marsupials were, Rottnest Island (or Rotto) is a fabulous place for a day visit or even a couple of nights in one of the many cottages or hotels. 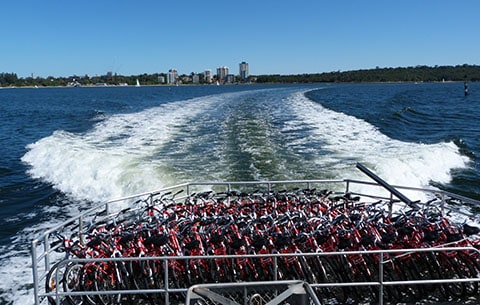 Leaving Perth with our bikes on the back

That famous “rat” was in fact the quokker, a quiet little character who isn’t scared of people and will eat anything – from pine needles to pringles. 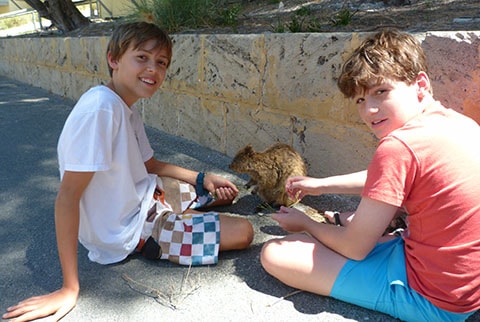 These boys are feeding him pine needles, which he takes in his hands and nibbles eagerly 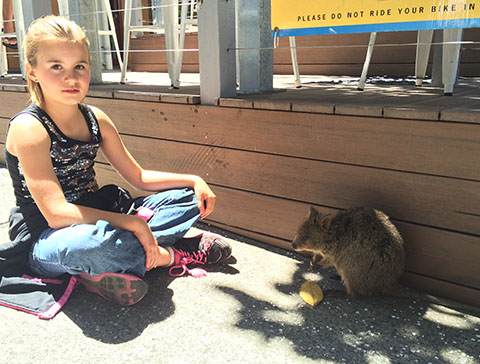 This girl is offering him a leaf. I approve.

There are signs everywhere asking tourists not to feed them lest they become ill, but everywhere you look stupid people are hand feeding them chocolate, chips and pizza. I found myself getting quite protective of these guys who were on the border of extinction not too long ago and are now numbering around 12,000.

Things to do on Rottnest Island 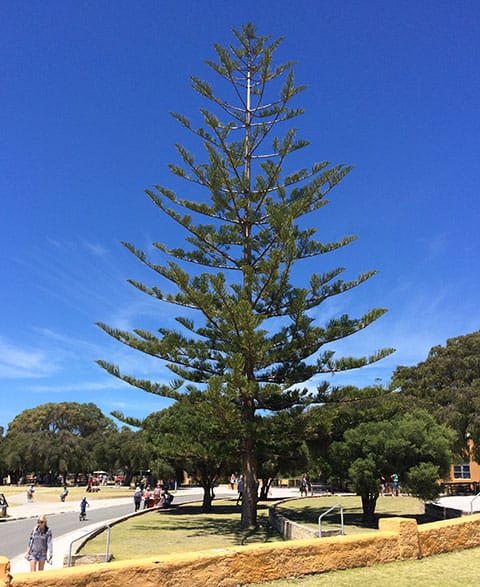 I just loved the clouds behind this Norfolk Pine 🙂

We had about 45 minutes to kill before our speed boat tour around the island, so wandered into the tiny but busy village for a bite to eat – and to meet the first of many quokkers we would encounter throughout the day. 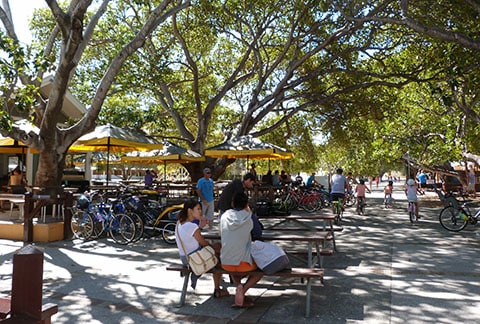 Bakeries, cafes, a general store and little souvenir shops in the village

The 90-minute Rottnest Explorer tour is well worth doing. You’ll shoot past the lighthouse, or stop in front of it as we did thanks to the osprey eagle posing for pics in front! 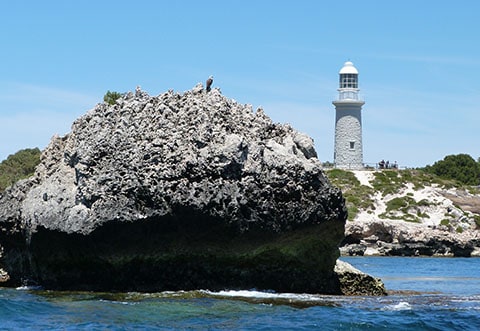 We slowed down to bob with dolphins and tootled into some of the 60+ beaches and bays for a better look at why Rottnest Island is so popular. 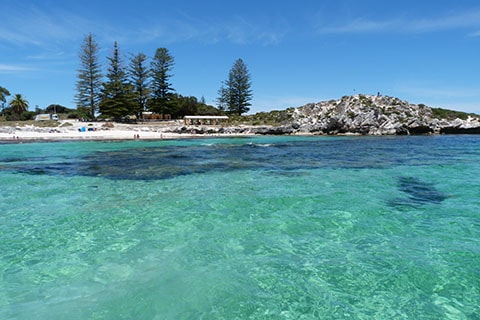 Can you see why this is the most popular beach?

New Zealand fur seals live in this bay and these ones were floating on the water holding their own hands. Cuuute! 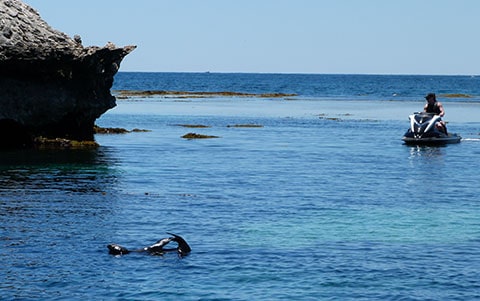 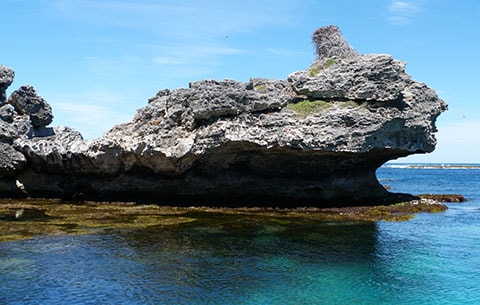 This osprey nest is years old, piled with sticks and stuff – including a dead quokker carcass apparently! 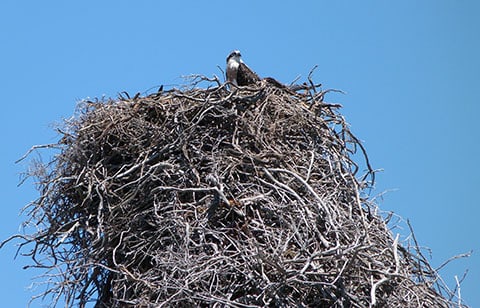 Mama watches us as we watch her

The off the boat and on to the bikes. There are sooo many bicycles on the island and with many roads, paths and tracks you could explore all day. However, don’t expect the signage to assist you very much – and when you ask people for directions, expect 2 out of 3 to be wrong! 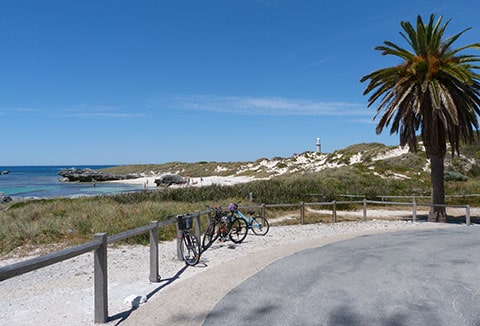 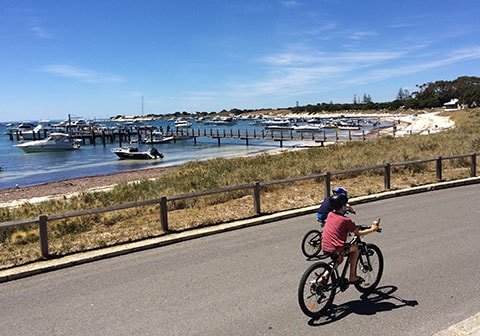 It’s all boats and bikes on Rottnest

We’d had a tip that the cafe in Geordie Bay would be great for lunch. By the time we arrived, after several one way tracks and a few u-turns, we were well deserving of our burger and fries. 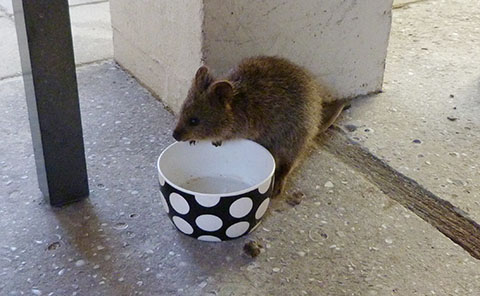 Baby quokker having a drink. The staff were kept busy shooing away crows and seagulls and trying to make sure the quokkers don’t eat anything that will make them sick 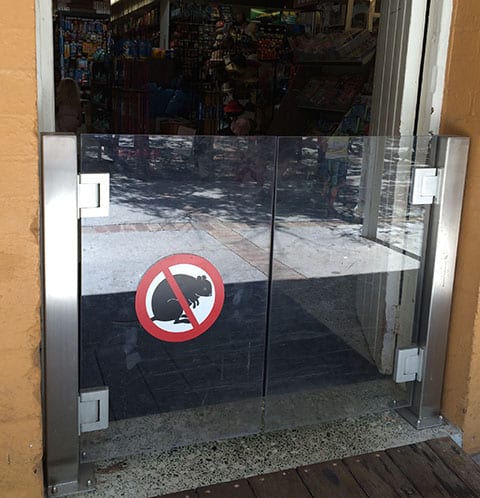 No Quokker doors into the shops! 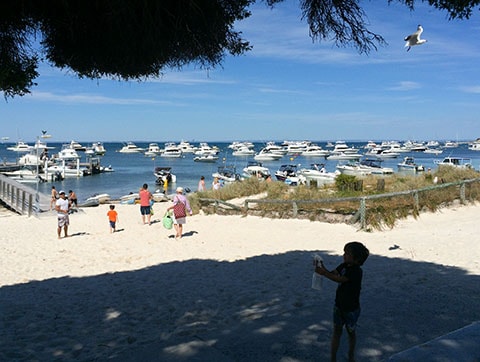 Hotel Rottnest has a genius way to keep the gulls and crows at bay: provide water quirting bottles for the kids!

The return ferry was set for 4.15pm. Just enough time to roll into Hotel Rottnest, overlooking the beach, for a cheeky cider with our newfound friends.

Our ferry ride over included a Swan River tour, past some of very spendy properties and then we floored it out to the island. Total time: 2 hours. Ferries depart from Barrack Street Ferry Terminal

But if you are lucky enough to have a boat, dozens and dozens were moored along the beach. A nice way to travel! 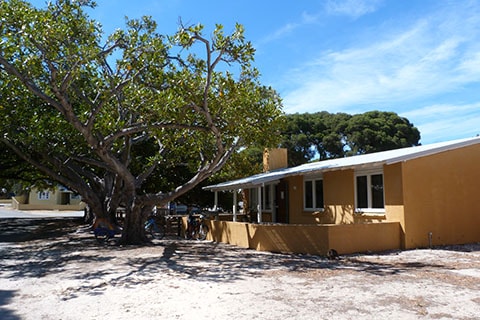 And then I returned to my hotel, Rendezvous at Scarborough Beach, to this little beauty! 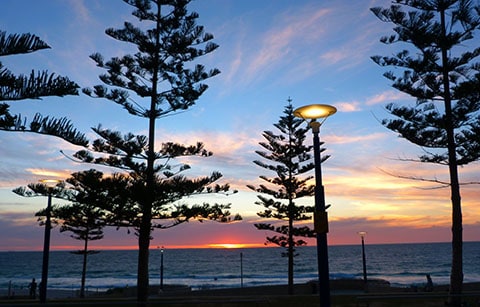 Great news for Kiwis (and West Australians keen to visit NZ) you can get to Perth with Qantas from Auckland non-stop from December 5 to April 26, 2015! Plus economy class customers will experience the new inflight dining of larger meals, more choices and faster service which is rolling out across the network from November 25.