Venice Beach has a distinct ‘scent’. Stepping out of our beachfront hotel room, at the Erwin, the sweaty sweet smell of cannabis permeates the air. 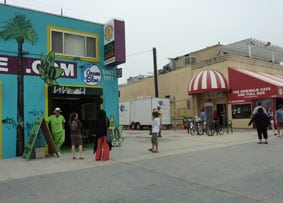 Not that it’s illegal here. Just tell the doctor who sits at one of the many medicinal marijuana shops that you have a headache, a sore neck, knee – whatever you can think of, and voila, he has just the cure. That’s the thing about legalised marijuana – you can get your certificate, buy your weed and puff it on the rooftop bar at the Erwin Hotel if that’s your bag.

But stand in any one spot along the beach and you will be mesmerised for hours just people watching. It’s as if the Director just shouted ‘Action!’ and all the crazies start performing. Only they’re for real. 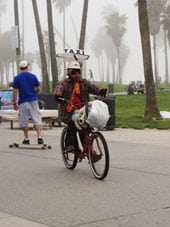 Over there is a guy with a taxi sign he took off a car and strapped to his head. Skating past him is a man in a turban with an electric guitar selling T-shirts. Groups of tattooed and quite possibly stoned girls are hoola hooping on the grass under the palm trees. Stall holders sell T-shirts and graffiti art, folks walk by with dogs the size of guinea pigs or huskies with wolf’s eyes and the touters pushing ‘medicinal’ marijuana call out on every corner. 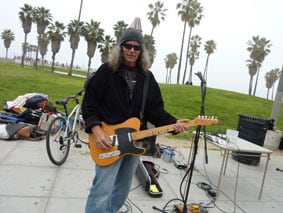 Matt Dowd's the king of the busking strip

But you never need go far in this world to find a Kiwi. I met Te Atatu-born busker/musician Matt Dowd. We were dining at the busy and very popular Sidewalk Cafe across from his spot where he and his mates play music each day. He came over for tips and we got talking. The former sports photographer turned street musician was featured in this NZ Herald story for suing the city of Los Angeles – and winning. He pocked US$40,000 in one case by overturning a bylaw that said all stall-holders had to have permits. They don’t any more. It’s first in first served now. He has another deposition on Monday and intends to win that one too for harassment over the years when he’s been given tickets and warnings but nothing ever comes of it. He won the first one based on the First Amendment of freedom of expression, and even though he has no green card, expects to win this one too. I’ll be following him on Facebook to see how he does.

If you’re into the eclectic side of travel, fancy a skull painting or a pair of knock-off sunglasses or just want to people-watch to kill and afternoon, you won’t find a better place than Venice Beach, California. 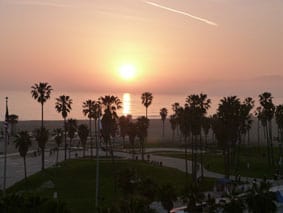 Sunset from the rooftop of the Erwin

The Erwin also has a great rooftop bar (called High – yes indeed) and people from Santa Monica (read my blog here about a day in this cool city) and Marina Del Ray come to watch the sunset and listen to the DJ spin some beats. You’ll find pop culture wall art of graffiti and rock stars and this is the only hotel I’d recommend in Venice for location and style.

By the way, I flew to LA with Air Tahiti Nui and plan to spend a week basking there on my way home! Check here for their fares to LA >>>