What a huge privilege to be invited by Air New Zealand to join 30 media from New Zealand, Australia, China and Japan to fly home on the delivery flight of the 787-9 straight out of the Boeing Factory in Everett, Seattle.

I was so impressed with how great I felt after 14 hours flying: the lower cabin pressure (set at 6000 ft rather than 8000 ft) means that my skin and nasal passages didn’t get as dry. It also makes for more humidity and I found this to be noticeably different with the scientific test that my hair still had curl and body by the end of the flight.

So, painted shiny black and with that new plane smell, here are a few facts and photos of this amazing plane that I just spent 14 hours on… 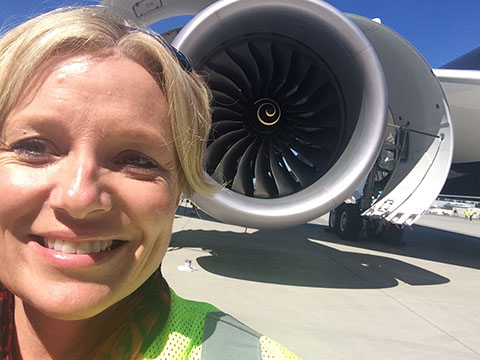 Starting with a selfie in front of the Rolls Royce engines on the tarmac at the Boeing Factory in Seattle, the world’s first Dreamliner 787-9 is almost ready to make its delivery flight home. 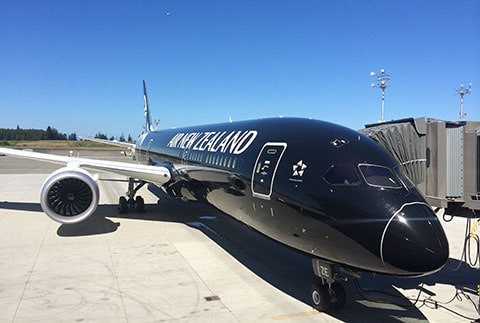 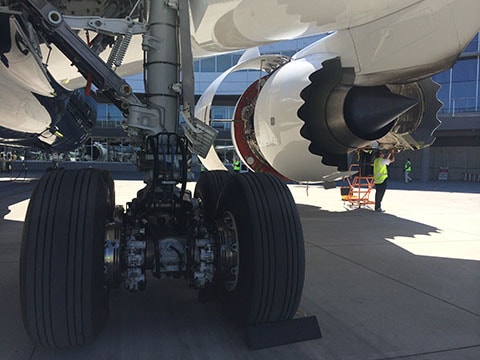 Showing off the landing gear and note the chevrons around the engine which makes this flight so incredibly quiet. Because of the carbon composite material and other innovative developments, the Dreamliner is 20% more fuel efficient than other similarly sized aircraft. 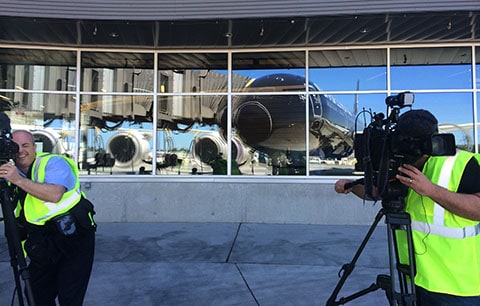 The new Dreamliner is the focus of paparazzi as she looks at her gleaming black self in the Boeing office windows. 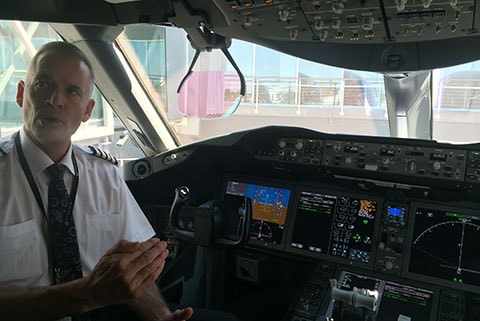 Let’s start in the cockpit. Captain Philip Kirk is one of 4 pilots bringing this new baby home. Notice the new ‘heads’ up’ display which allows them to read their instruments while still looking out the window. They’re very excited about it. 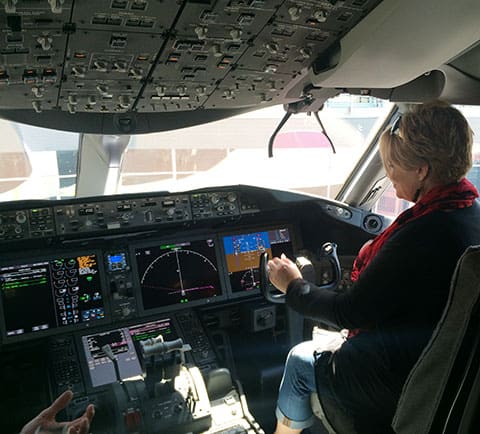 And now it’s my turn! 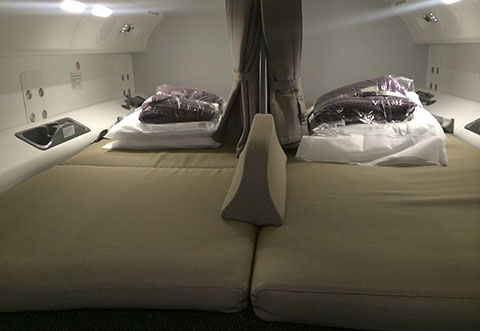 Through a sneaky door beside the galley is the pilots rest area. Two mattresses and a comfy chair for RnR mid flight. 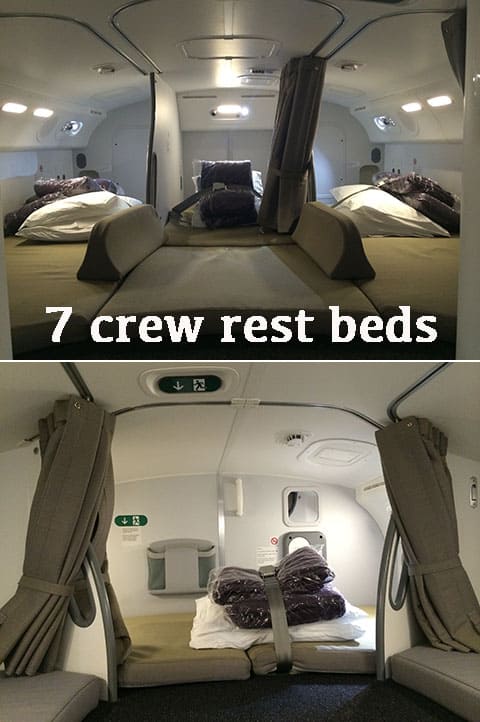 Crew rest is configured 3 at the front, 2 on the sides and 2 in the rear 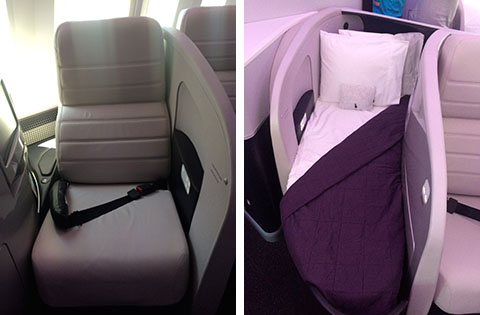 There are 18 Business Class seats, the same lie-flat size as other Air New Zealand models, only this leather is a fresh white ‘chalk’ colour. It comes with a memory foam mattress, 2 pillows and a duvet which are laid out by the crew when you’re ready to sleep. It’s 55cm – 84cm wide and 2m long. The TV screen is a larger 11 inches (28cm) 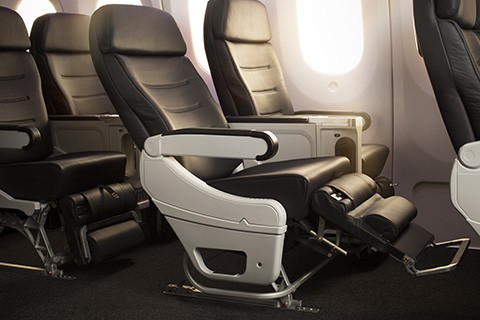 There are 21 of these ink coloured Premium Economy seats arranged 2-3-2 across. They have a 49cm recline and a leg rest with that little foot rest that can be folded out making it a 1 metre pitch. It also has the 11 inch screen. 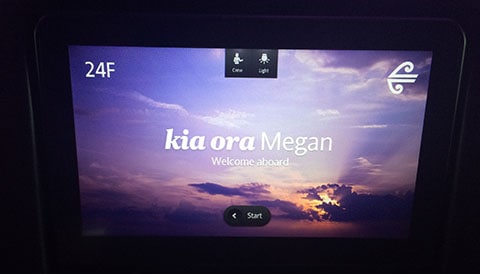 My personal welcome at my Premium Economy seat! 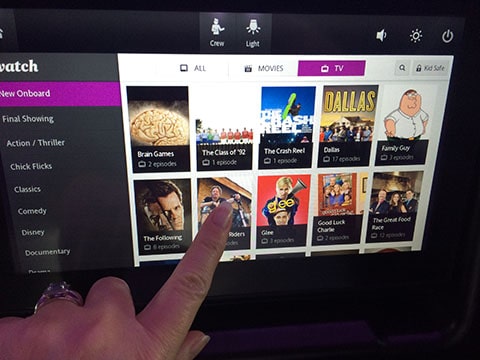 The new touch screen TVs work just like a tablet. They’re lightening fast and you can swipe through your choices – all 150 movies and 800 TV shows plus music. Oh and we trialled the ‘message the crew’ feature with cheeky requests for phone numbers – figuring they’ll need to get used to that! We also thrashed the ordering section and had wines and bloody mary’s delivered. One at a time. 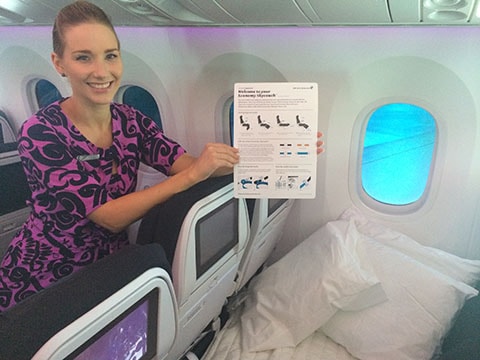 Learning how to set up the skycouch (cuddle class) and all the different ways to strap in depending on the number of people and your position. There are 14 of these seats. 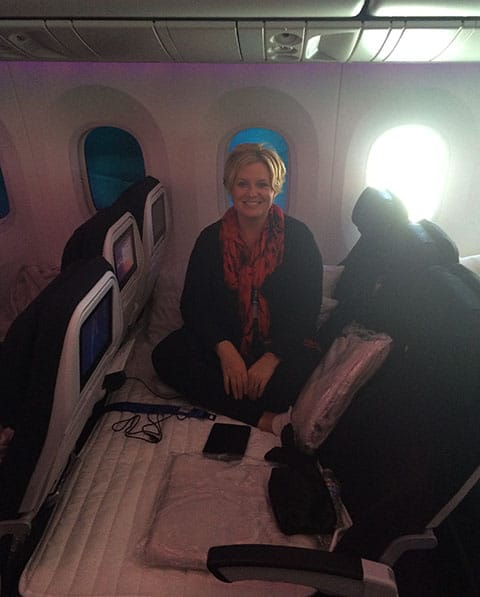 With my halo positioned on my left, I tried it out and got a good couple of hours shut-eye. It would be a squeeze for 2 though I’m thinking! Well, actually I roped one of the reporters in to try it and yes it was. 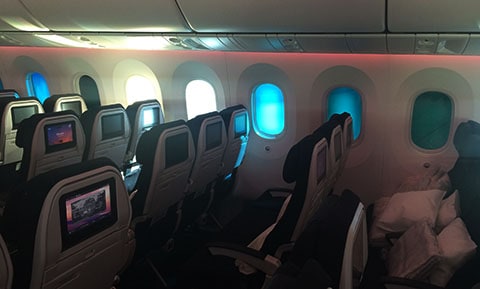 I set these windows up as an example of the stages of dimming. They can also be controlled by the crew for takeoff, landing and sleep time. It takes about 20 seconds for the colour to change so people will have to be patient and not keep jabbing the button! Notice they’re also bigger than before – 30% bigger in fact.

There are 263 Economy Class seats in a 3-3-3 configuration. They have a more flexible head rest, are nearly 44cm wide, and recline nearly 13cm. There is also a USB port in each screen (just like in Premium and Business). 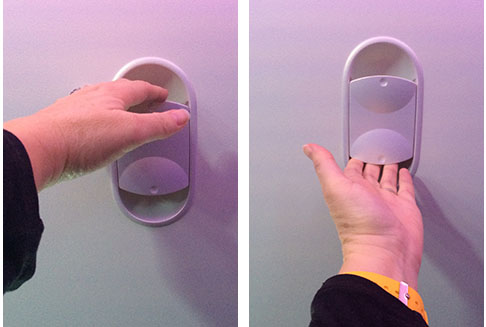 Another natty little feature is the ambidextrous catch on the overhead lockers. Depending on your height you can lift or pull. 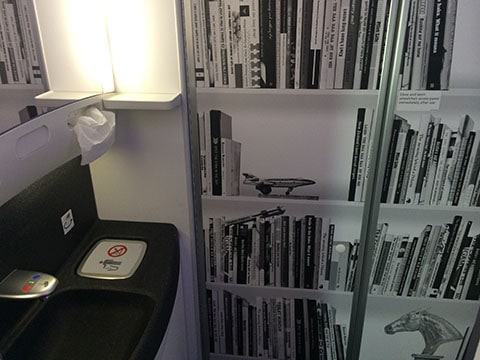 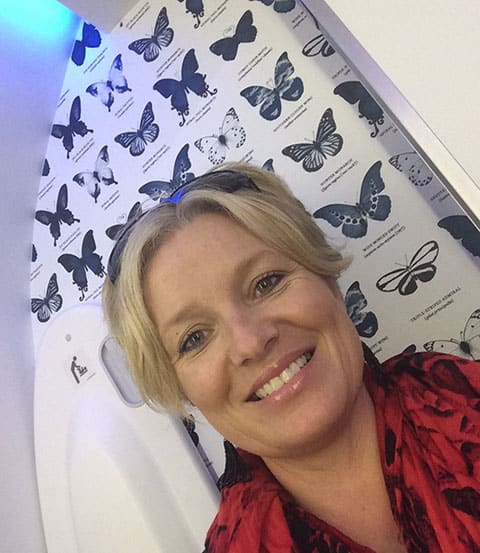 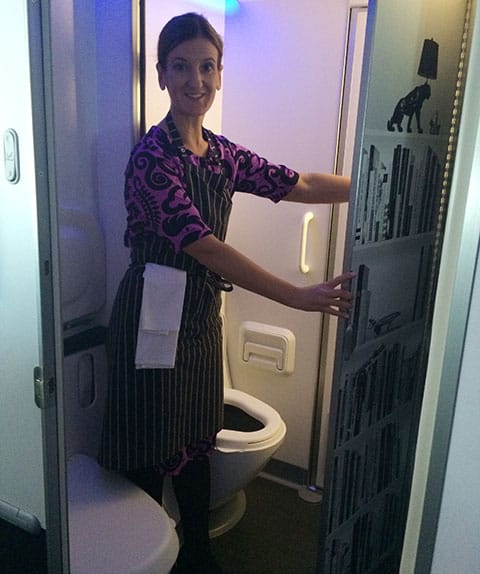 But this feature is the cleverest toilet feature I’ve seen. The crew can unlock and open the dividing wall and make it big enough for wheelchair access! Thanks Ali 🙂 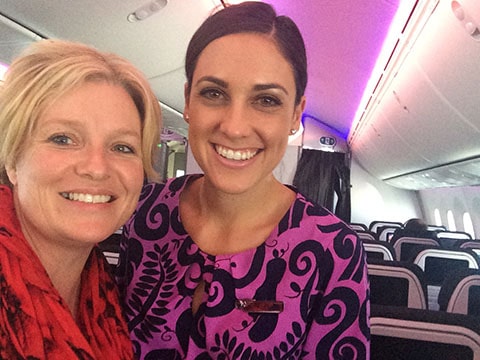 A cheeky selfie with Kellie who you might recognise from the Swimsuit safety video! 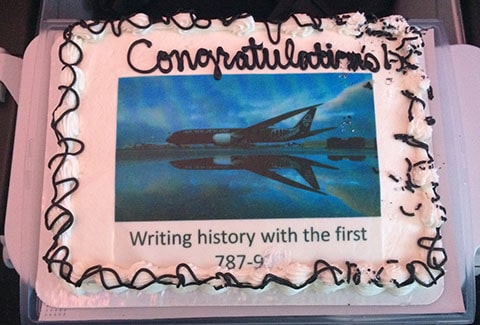 The congratulations cake got a little bashed during the flight! 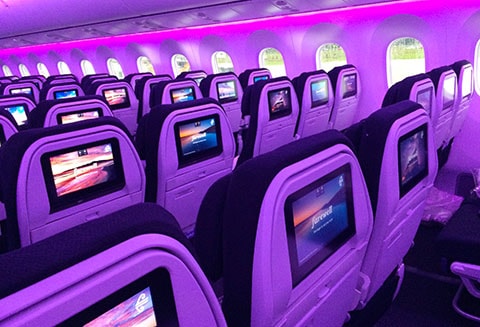 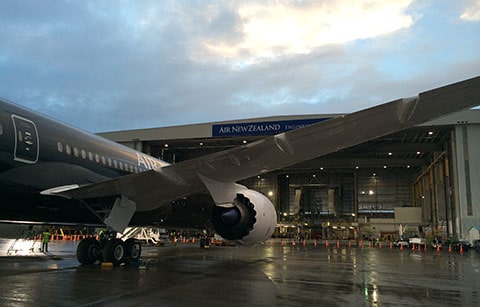 Honey we’re home! The sky cleared just for a moment in Auckland and 100 Air New Zealand staff did a haka on the tarmac.

Where to now for the Dreamliner?

By the end of the year the Dreamliner will be put on the Auckland-Perth route and with the next few deliveries, they will also begin flying to Shanghai and Tokyo. By 2017 Air New Zealand will have 10x 787-9s in service. Well that’s the plan anyway!

What an awesome experience to be invited on a delivery flight, and a world-first model at that. I felt a million bucksupon landing and have had no jetlag at all. Thanks Air New Zealand!