Not only is the Pan Pacific brilliantly located in Singapore’s Marina Bay, it has just undergone an $80 million transformation making quite possibly one of the most stylish and modern in town.

The view from my 28th floor window

They use the word “transformation” so you are not confused between that and a refurbishment. The former, in this case, means closing the entire hotel for 5 months, moving a restaurant from the top floor to join the foodies on level 3, adding a club lounge on level 38, extending rooms which had balconies to make them bigger with little lounge areas and Nespresso machines, and totally pimp the hotel with high tech gear so that every question you might have can be answered through your TV screen. No more compendiums of information on your hotel desk, just log in and find out how to get your laundry done or what’s on the menu in one of their 7 food and beverage outlets tonight. 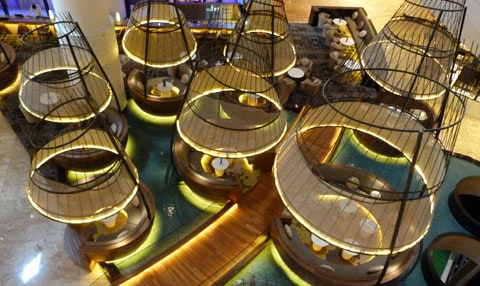 Looking down on the booths in the lobby

The Pan Pacific is a popular corporate hotel and once inside the triangular shaped atrium that rises 38 floors with a glass roof somewhere near heaven, you can understand why. There are 790 rooms and with bars and plenty of conference rooms, it’s a no brainer. But what surprised me was the boutique feel they’ve managed to invoke and I can only assume the transformation was all about making this chain hotel a stand out for the leisure traveller.

The lobby initially had no check in desks with the new techno gadgetry meaning that staff would assist you on iPads wherever you happened to put your bags down. But creatures of habit that we travellers are, it became apparent that we look for a desk to gravitate to, so they succumbed – although the iPads remain. The main floor features a 22-metre long bar with circular booths under lantern-like canopies which look like they might float up to the roof at any time. 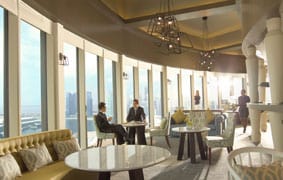 We were given access to the Pacific Club lounge on the top floor (level 38) with 360˚ views of Marina Bay, the city and the hundreds of ships and fishing boats that bob in the South China Sea. This meant we could choose to come up here for breakfast which is a small offering of the extensive offering on the 3rd floor at Edge restaurant. Here there are 7 food stations serving a variety of cuisine and it comes into its own at night with any Asian flavours you like all cooked fresh by chefs at each “kitchen”. Between 3-5pm afternoon tea is served up here, with compliments for Club members and you’ll find little warm scones with jam and clotted cream, tiny cheesecakes, muffins, fruit and a couple of savoury items. Then take a break for an hour and come back up between 6-8pm for cocktails – or a big glass of red wine. 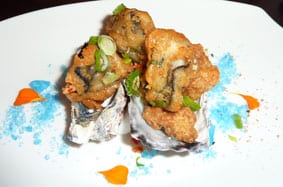 The Pan Pacific has 3 main restaurants and the night we arrived from London, general manager Scott Swank and PR manager Nathalyn Fong, met us for dinner at the Cantonese Hai Tien Lo. Despite our eyes nearly falling out of our heads, the 6-course degustation style menu was so yummy, that I had to photograph every dish to tell you about it. 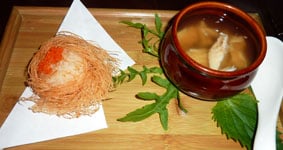 We started with deepfried oysters and mushrooms with dipping sauces and a big glass of red wine. I know, when in Asia drink tea, but thankfully Scott’s American! Next was crab meat soup and beside it was a scallop wrapped in crisp vermicelli noodles making it look like a little bird nest. Vegetarian shark fin soup was the PC dish of the day. Instead of real gelatinous shark fin, noodles are used to create the same texture – and no shark was harmed in the process. However the grouper wasn’t as lucky and we enjoyed a fillet with the faux shark. 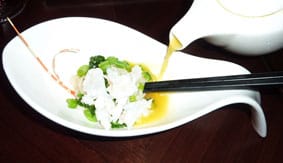 Chicken soup is poured over the lobster meat at the table

Then a tiny piece of pan seared pork with foie gras in puff pasty and pear, followed by lobster in chicken stock and finally ending on the sweet note of toffeed fruit on a stick and coconut gelato.

Edge is the huge buffet restaurant I mentioned earlier, also on the 3rd floor and offers an all-you-can-eat menu for $58 per person with choices ranging from black pepper crab to dim sum to pizza to Indian curry, cheeses and an extensive dessert corner. This has been designed with locals in mind and was filled with same when we went who love the range of food.

For Japanese lovers, walk outside on the swimming pool level (4) and through the Japanese garden filled with koi to Keyaki. You can get a private room for parties here too.

As luck would have it, not only did we love the views (and soft pillows), but the Pan Pacific is literally connected to 2 shopping malls so no getting wet during the afternoon thunderstorm. It’s also a short walk to the famous Bugis Junction shopping mall and attached market for cheap tat and knock offs. Oh and on the way you can make an easy detour to Raffles for an overpriced Singapore Sling (read my slurping post here >>)