We all know that airplane toilets are quite possibly the most unhygienic places in all the world (I will always wear slippers rather than risk socks), yet an estimated SIX PER CENT (yes I’m shouting!) of US flyers have used it to gain their Mile High Club certificate. Ugghh! But the good news for frisky flyers is that there are classier ways to join the club – if such a badge is on your wish list…

The world giggled like pimply teenagers in 2010 when Air New Zealand unveiled the SkyCouch in economy class which was quickly dubbed Cuddle Class. Guffaw. It involves three seats in an economy row with lift-up footrests forming a couch (or bed). Ideal for two people or when travelling with little ones. However having squished into it with a media colleague (when I was on the 787 Dreamliner delivery flight out of the Boeing factory in Seattle!) purely for research purposes I hasten to add, it was deemed too narrow for much sleeping… 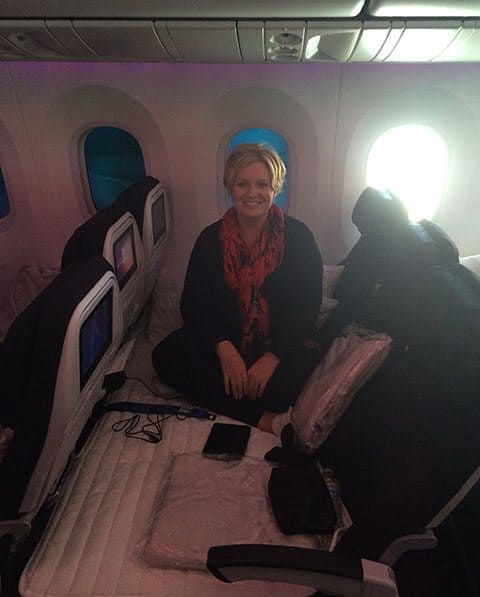 The SkyCouch for one is ideal!

But to do it in style (as they say) travel first class on Emirates and you get a private reclining seat with your own sliding door to shut out the drinks trolley. Book the middle row and your companion can lower their screen for a little te ta te, although having had a good look at this set up after the posh people had deboarded recently, the side table and various buttons and paraphernalia between you could make things a little awkward. 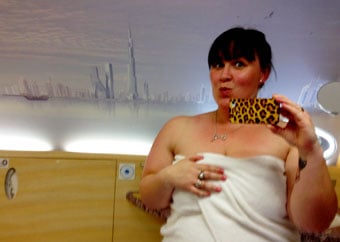 Guest blogger Tash McGill got to check it out. Sans partner.

Ok, this deserves a separate mention because how incredible is it that an aircraft would carry a gazillion gallons of water so that their first class passengers can take a shower at 33,000 feet? (Etihad has it too FYI). You only have limited time under the water, so those who go in to wash their hair do it in phases of water on or off. Those who go in there for other things don’t care about the water. 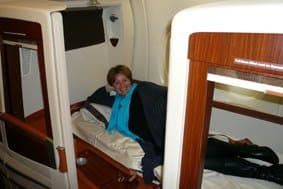 I got 2 minutes in the SQ first class cabin!

The airline proudly advertised their $18,000 rose petal strewn first class suites when they became the first to fly the A380. The 12 suites are really double beds and the airlines was forced to quash the hopes of amorous flyers by insisting that no one has sex on them. Besides, a tall passenger walking past would be able to peer over.

THIS is the ultimate! Etihad offers a class beyond First Class: The Residence. They call it ‘flying reimagined’, I call it your own flying apartment. Each individual cabin is so spacious you can walk around in it. It comes with a living room, a bedroom and an ensuite shower. It’s designed for two people travelling together and “club entry” for a one way flight between Abu Dhabi and London is a pash over $30,000. 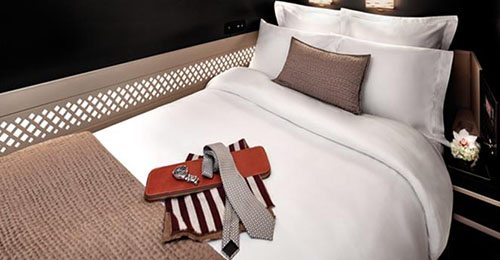 Your double bed on Eithad 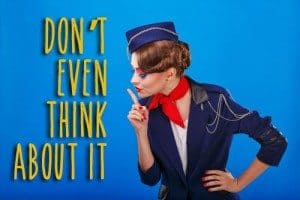