I’ve been thinking about the humble bee lately. They’re under threat you know. The little insect that I am highly allergic to, is actually in need of saving and I am (at a distance) trying to do my part. I’ve realised that spraying toxic poison on my roses and jasmine to kill off the nasty black bugs, mealy bugs and whitefly are also making the flowers toxic and my little buzzy friends are in danger of dying out.

I have started to notice that hotels are taking the preservation of bees seriously and thus I am adding my endorsement to those who do more than just stop spraying their roses by giving a shout out and blogging love to these properties who know that without bees we won’t have fruit. 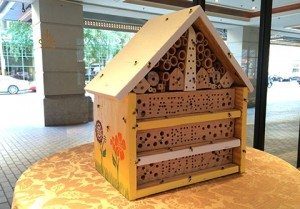 The first hotel that I ever came across with a fully fledged bee program was the Fairmont in Washington DC. Not only to do they have hives on the roof and make their own honey which creatively end up in a bee-tini cocktail, but they work with local DC schools to help educate the kids about the importance of bees in agriculture. They sell bee laying houses too so if you want to start your own colony, you just get one of these little pollinators and help out. 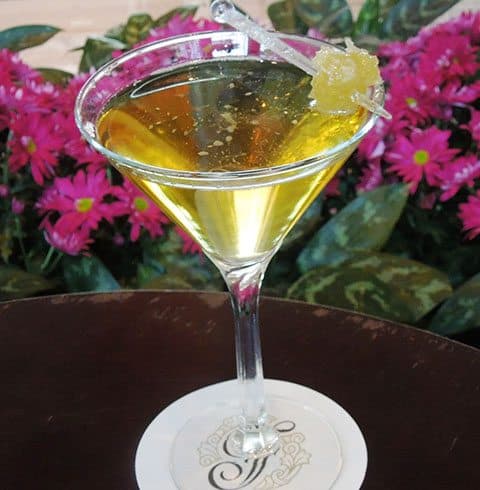 Many of the luxury hotels under Relais & Châteaux have come onboard with bees too and guests can even get amongst it.

“It is critical that the habitats bees thrive in are restored. Bees are indicators of the health of our ecosystems and the only pollinators for a large number of plants. One- third of our food supply would disappear without them,” they wisely believe.

Thanks to a new generation of beekeepers, Relais & Châteaux properties are producing honey all over the world in places like Japan, New Zealand, Chile, England, Spain, France and the United States. Here’s where… 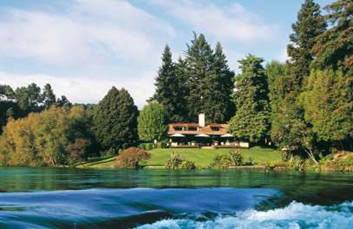 Huka Lodge sits discretely on the edge of the Waikato River

Two years ago, when talented chef Paul Froggatt came from Asia to New Zealand’s Huka Lodge to be its executive chef, he immediately began crisscrossing the region to find fresh inspiration for his cuisine. He became fast friends with a local beekeeper and convinced him to move some of his hives to Huka Lodge on the banks of the Waikato River in Taupo.
La Grande Maison Bernard Magrez, Bordeaux (France)

In 2009 Bernard Magrez began reintroducing bees at vineyards throughout the Bordeaux region as part of a contemporary art project originated by Pierre Grange Praderas. The project aimed to bring back domestic bees to wine growing areas, increase pollination and share the fruits of their labours with the honey produced. During the season, the bees were only exposed to treatments made from essential oils. 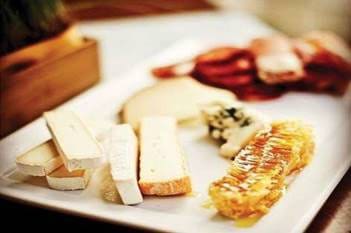 Nothing better than honey and sharp cheese!

This property sells a line of natural beauty products called Simples et Miel that can only be found at La Cheneaudière. It is paraben-free and dye-free, plus all the products are made with pure water from the Colroy-la-Roche springs, honey from the property’s beehives, berries from the Vosges forest and plants from the surrounding prairies (common plantain, common mullein or velvet- plant, black elderberry, heather and blueberries).

Since July 2014, 200,000 black bees of Burgundy have been living on the rooftops of Relais Bernard Loiseau in small hives designed especially for them. Thomas Décombard of Apidis comes from a long line of beekeepers and tends to the property’s hives.

Abadía Retuerta LeDomaine teamed up with Honey Montes de Valvení to offer guests a chance to play beekeeper on a one-of-a-kind tour. Guests can visit the apiary dressed in special beekeeping gear and get up close to the hives.

Located in Piedmont, one of Italy’s most famous gastronomic regions, Relais San Maurizio has made a name for itself in the beekeeping trade, which has been practiced by Cistercian monks here since the 17th century. The property makes its own brand of honey called Abbey Honey on land halfway between the Alps and the Mediterranean atop a hill gently swept by sea breezes and surrounded by grapevines.

This English property first delved into beekeeping with a small handful of hives but the venture quickly grew and as of the 2016 summer the apiary will have 70 beehives. With help from a professional beekeeper, the team has its heart set on expanding the activity mainly by planting the bees’ favourite flowers and plants like borage, phacelia and lavender. Protecting bees is part of a widespread environmental effort that is also working to increase the populations of birds and hedgehogs as well as grow other plant varieties to offer guests unique custom- made jellies and syrups. 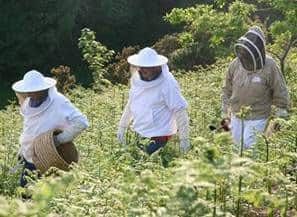 Longueville Manor embarked on an ambitious environmental conservation program called New Leaf. Some of the property’s actions include maintaining 24 hives that produce honey for the restaurant and an active support effort for the Durrell Wildlife Preservation Trust, which works to protect species close to extinction. Bee colonies are helping area farms by improving pollination rates and they supply an abundance of fragrant honey for hotel guests.

Château St. Gerlach has five beehives and a display hive where visitors can watch Carniolan bees hard at work. Last year, they produced 150 kg of honey that was served at breakfast, used in desserts, given away or sold. St. Gerlach’s chef Otto Nijenhuis is a certified beekeeper and member of the Dutch Beekeepers Association. 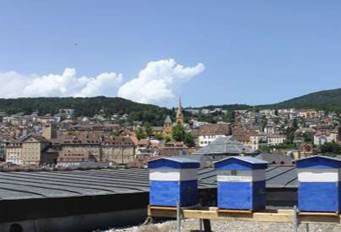 Hives on the rooftop at the Beau-Rivage Hotel

On the hotel’s rooftop lies Le Petit Beau-Rivage, a series of beehives that are home to 60,000 yellow and black pollinators. Guests are invited to visit them, guided by beekeeper Audric De Campeau, founder of the eco-responsible company CitizenBees. Dozens of built-in sensors were installed inside and outside the hives so you can see how the Hymenoptera live in real time.

The owners of this hotel in the heart of the Black Forest renovated an old farmhouse that once belonged to healers with a plan to hold events and old- fashioned tastings there for hotel guests. The carefully tended kitchen garden is a beautiful refuge for three bee colonies. The honey they produce is on the breakfast menu every morning and also used in a royal jelly treatment at the spa.

Chef Chris Eddy at Winvian Farm in Morris bought some hives from local apiary Red Bee Honey to supplement his farm-to-table menu and live up to his commitments on sustainable development. The hotel’s Instagram page shows how this microcosm is buzzing with activity across 45 hectares of organic gardens.

In the heart of the “Japanese Alps” lie the hidden charms of this hotel built in 1931. A little gem inside a national park embedded in the peaceful mountains between snowcapped peaks and hot springs reputed for their healing properties. Amid this incredibly lush landscape beehives have been installed, whose honey is harvested once per year.