8 cool things in Macau for families

I just spent a week in Macau to explore this unique city, only an hour’s ferry ride from Hong Kong and discovered all sorts of great things to do and see.

Macau would make a great alternative stopover if you’ve been to Hong Kong a few times before – and you can clear customs direct from HK Airport in Macau, via the aforementioned ferry. Here are some of the things I reckon families will love about it:

Galaxy Hotels pools
I stayed at the Banyan Tree, which is one of five hotels in this Galaxy Hotels group. Firstly, let me say, the Banyan Tree’s standard room comes with your own soaking pool which about six metres long IN YOUR BEDROOM! Ok, calming down, if your family is looking for a hotel with a pool that’ll keep them amused for days, there are at least six in this complex.

You’ll love the wave pool which three of the hotels all back onto (including Banyan Tree). It’s gentle and shallow enough at the “beach” for little ones in floaties, but fun for older ones with boogie boards. There’s a water slide and river ride over at the Ritz Carlton and JW Marriott and you can wander around all of them.

If your kids are older (or not with you) there is an adults pool with round daybeds lining the side, and if you really wanted to splash you for your friends you could rent a cabana suite with air conditioning, a table to dine at, showers and a cool space to hang out or throw a party. 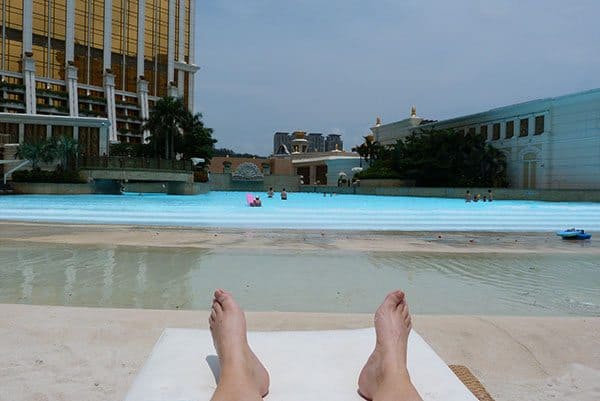 Chillaxin by the wave pool!

The Venetian
Yes the same as the Venetian in Las Vegas, except bigger! It has water canals winding through “streets” lined with shops – all under a ceiling painted blue with puffs of white clouds. Gondoliers sing as they pole long boats through the water with tourists who want to be stared at. This place is a feast for the eyes – and that’s before you hit the shops.

Brands like 7 For All Mankind, Armani Exchange, CK Jeans, Zara, Brooks Brothers, French Connection and tons more – including shoe shops that lured me in like a moth to the bling. One shop succeeded and I came out wearing a smile with my new heels. There are toy shops and kids fashion so if your tribe likes to shop, especially in such a remarkable setting, the Venetian is my pick. 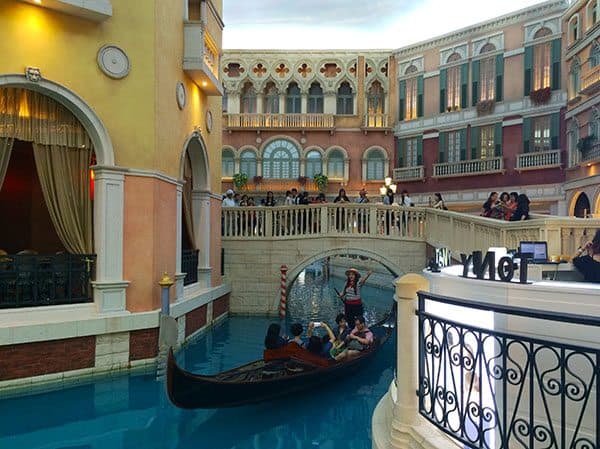 I loved shopping here at the Venetian

The Macau Tower
Built by the same company and to the same design as Auckland’s Sky Tower, the Macau Tower is worth a trip to the top – even if you don’t want to throw yourself off. AJ Hackett opened the world’s highest bungy jump and sky walk here and I stepped out onto the rim for a stroll around at 233m above the ground.

This 360 viewing viewing deck provides an awesome look at the 30sq km that is Macau and across the river into mainland China. You can just pop up and bring your camera for a look, but if you do the sky walk the Kiwi team up here will point out the various sights and sites that you might want to head to when your feet are back on the ground and your head is out of the clouds. 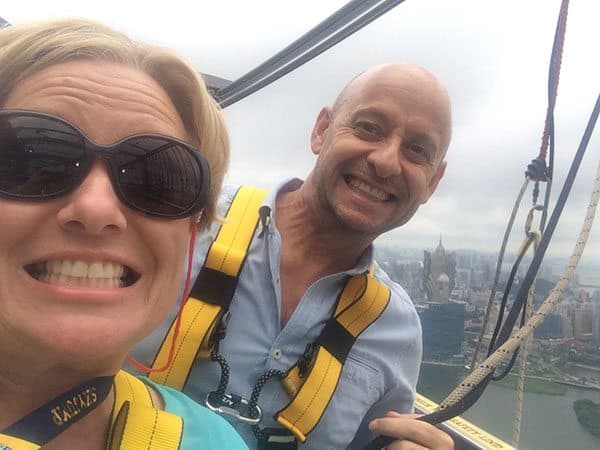 Me and Adam out for a walk around the Macau Tower!

Macau Science Centre
Finished in 2009, this huge cone-shaped building on the water’s edge will have you asking about it as soon as you see it from the ferry. Except, you dear reader, now know! You start by taking the elevator to the top floor and spiral your way down its 14 galleries with hands-on exhibits. Great for kids of all ages where toddlers can play shops and bang on things to make various noises, while teens can learn to drive in car simulators and fire a gun at the bullseye (not from the car). There’s stuff about botanic life and outer space and you could easily kill two or three hours here. There is a cafe for the adults! 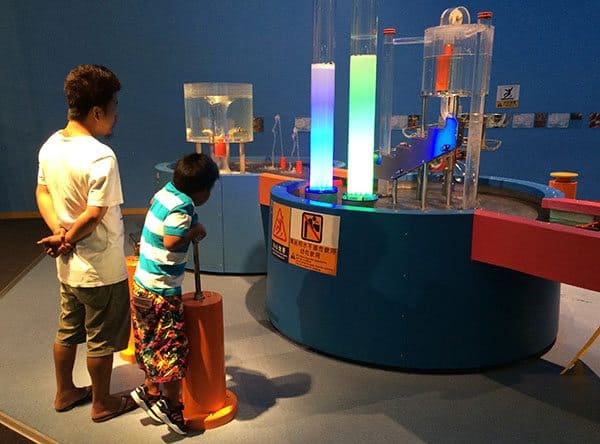 Trying to blow things up in the Science Center

City of Dreams House of Dancing Water
Originally the City of Dreams “entertainment hub” had a humungous pool designed into it to serve as a restaurant. I didn’t quite get to the bottom of how guests were going to dine under water, but suffice to say, the project didn’t work out. But because of the five Olympic sized pool space already built into the complex, they decided to get in touch with Franco Dragone, the mastermind behind the spectacular Circque du Soleil. He designed the world’s largest water show with a moveable stage that comes and goes as quick as a flash and dancers become swimmers with tall ships and hanging human chandaliers. It’s a fabulous show and well worth sitting within splashing distance.

The pic on the right is the same pool! 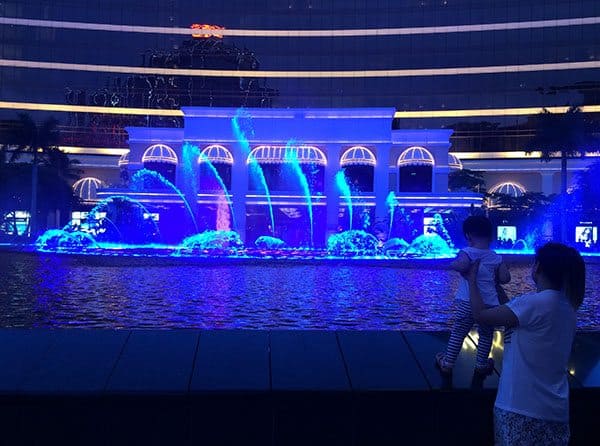 Macau Museum
To be honest I’m not a huge museum fan, but I’ve put it on this list for a couple of reasons: it has air conditioning and you’ll need it when you’ve been wandering around Senado Square and around the ruins of St Pauls. But it has some really fascinating exhibits like the fireworks manufacturing that used to be a major employer here in Macau (and dangerous), and also the history of cricket fighting! There are costumes and ancient artifacts and I’d allow about two hours for a wander through. 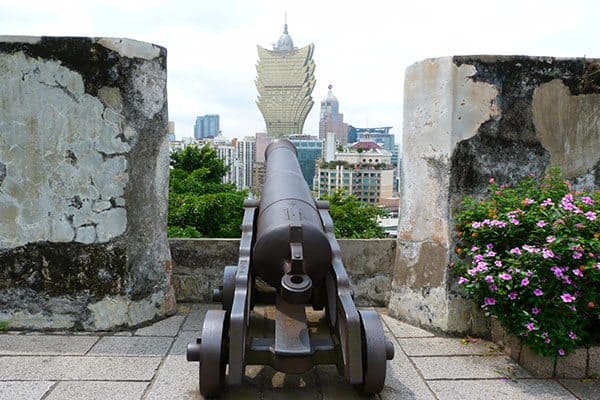 The view from the museum!

Portuguese egg tarts!
I had to put these in because they’re the most famous thing to eat in Macau – and I only got to try them once. (Although I had two!) These sweet custard tarts with a kind of creme brulee top are best served warm in their flakey pastry and are sold all over Macau. The original bakery is Lord Stow’s in Coloane where originator Andrew Stow first made these little morsels, but Margaret Cafe e Nata, near Senado Square (great for shopping and seeing the old historic part of the city) also makes them. Andrew and Margaret used to be married… 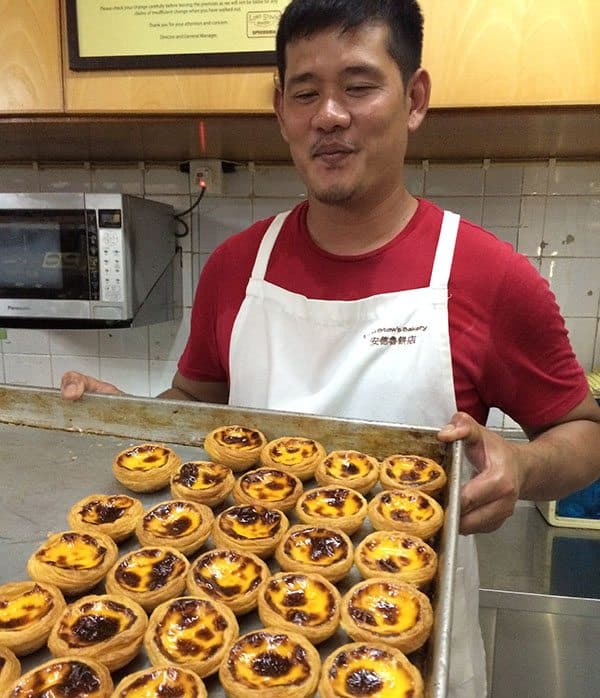 If you’re thinking about Macau, you might to read my post on 8 Reasons to Visit to Macau >> 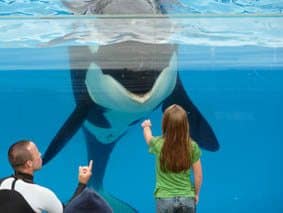 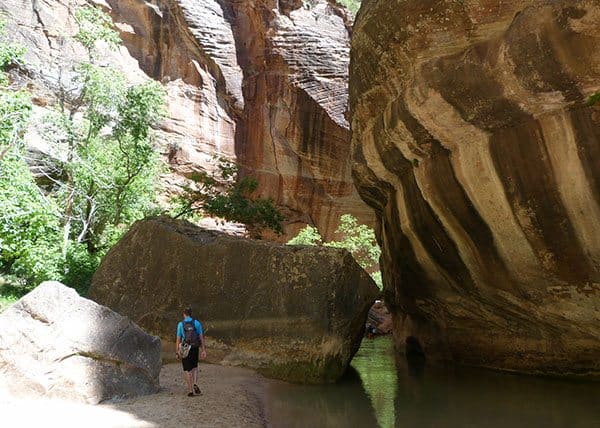 Sitting in a ferry to macau and came across with this blog. LOOKING forward to walk aroubd macau tower rim (if weather permits) THANK U....

Fantastic! I really like Macau. Hope you get to try some of the amazing food too :)