Ferrari World has a ride that is so fast you have to wear goggles lest your eyes pop out, and if you scream your cheeks will wobble with the extreme G-forces so much that slobber will escape from the corners of your mouth and end up in your ears!

But then reaching grand prix speeds of 240kph and 4.8Gs in under 5 seconds will do that.

Abu Dhabi is a country that is growing faster than a mushroom on a rainy day and Yas Island is one of their incredible projects.

In 2006 this 25 sq km manmade island was started in a venture which is planned to run until 2018. The idea is that it will be an entertainment and cultural hub. When I first visited in 2009 just a handful of the many hotels were up but the priorities were sorted: a Formula One race track that zooms under the Yas hotel was finished and the big red roof of Ferrari World was shining bright enough to be seen from the International Space Station. 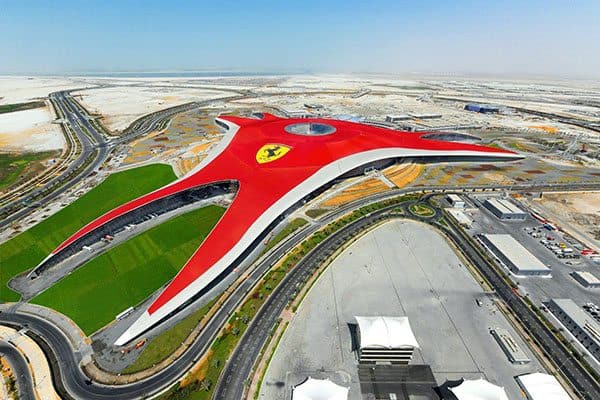 The dramatic roof of Ferrari World (pic on Facebook)

So on our way to Europe with Emirates last month, we spent two nights in Dubai and decided to take the hour-long drive to Abu Dhabi to check out this indoor theme park – and the fastest roller coaster in the world!

Of course there are plenty of other things to do at Ferrari World and in fact tame little rides and simulators for kids, through to the Ferrari museum for true petrol heads. I enjoyed Viaggio in Italia in which you sit on a row of seats, strap in and you are lifted into a massive dome screen for a virtual fly over Italy – with appropriate engine noises.

I jumped behind the wheel of my own simulator on a virtual Yas Marina Circuit (which is down the road). It is on hydraulics so corners and crashes are a 4D experience. Turns out I’m bit of a girl racer as I won against the three others (including my husband) – in a simulator named Niki Richonen. Yusss!

The Fiorano GT Challenge roller coaster lets you challenge your friends at speeds up to 95kph with twists and turns based on race tracks from around the world. Don’t worry, you are on tracks and are not actually responsible for the driving!

There is an Italian piazza with restaurants and happily (for, ahem, the non-petrol heads) Ferrari World is attached to Yas Mall with 370 stores, plus plenty of eateries and a 20-screen state of the art cinema! Perhaps I should have said this at the beginning 😉 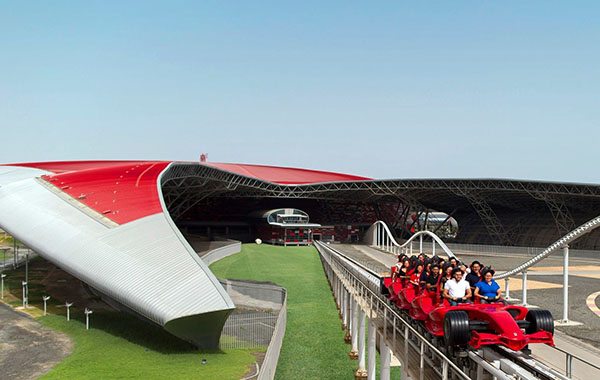 Ricocheting out the gate!