Guest blogger Tash McGill got to ride on the Christmas Train across the outback from Sydney to Perth and visit the tiny communities on the way with Aussie superstar Jessica Mauboy. Here’s her story, but beware it’ll inspire you to want to go this year: 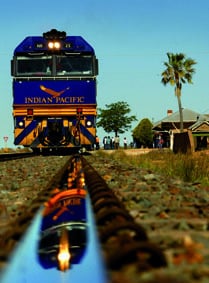 Stopping in outback towns to meet the locals

When it comes to Australia, ours is a bit of a divided family; my mother loves the Kimberley, Broome (probably for the pearls) and has traversed the Great Ocean Road. My sister lived and worked in the outback of Western Australia for a couple of years and I, well – I’ve just never been that excited by it. Prior to this year, I’ve been to Sydney, Brisbane and up to the Sunshine Coast. However, if there was going to be one trip that could change my mind – fair dinkum – I think this might be the one!

Waking up to the sun streaming across the remnants of New South Wales through the picture window of my sleeper cabin, I figure I’ve got my train legs on, if train legs are anything like sea legs! The landscape is breathtaking, through shrubs and trees that look more blue than green, to big, wide skies that stretch on forever. I might be waxing poetic, but seeing such a massive landscape in front of me really does awaken the imagination. 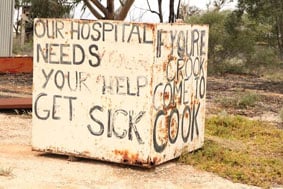 “Our hospital needs you. Get sick!”

All along the railway, there are towns and communities that support the line – and you start to get a feel for just how vast Australia is. Stopping at Broken Hill was all too brief, although usually passengers can disembark for aptly named ‘Whistlestop Tours’. Due to trackwork, we were slightly behind schedule so it was just enough to see the tip of the mine that Broken Hill is built around (and named after), the slightly rusted facade of the main street and the flurry of locals hoping for a glimpse of Jessica Mauboy, our resident singer on board.

She didn’t disappoint, briefly hopping off the the train, which includes motorail carriages used to transport cars across country spilled out both ends of the platform. She sang, they laughed, we clapped, some danced. Then we were off again, onto the next stop. (If you needing a memory jog, here is Jessica Mauboy singing Galaxy with kiwi Stan Walker)

This iconic journey includes the larger towns of Broken Hill and Adelaide – where I could’ve made use of a day or three to tour the local vineyards and walk around the beautiful city centre. But the really captivating magic happens in places like Rawlinna, Watson and Cook. The stop at Watson is nothing more than the end of a dirt road. How the driver managed to see it, I’ve no idea but I’m assuming it must have been some sort of useful GPS! There were 100 or so locals gathered to see Jessica sing. Jessica, who is part Aborigine and from Darwin, was an instant hit with the crowd, who gathered in close. Almost as much of a hit was Santa, who had caps, backpacks and lollies for all the kids. Then, it was time to go and the crowd dispersed, 4WDs disappearing into the dust with not a house or township in sight for miles and miles around. It’s something to behold. 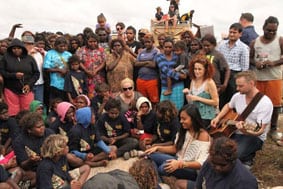 I’ve heard people talk about Uluru – the magical silence of the desert. But it’s not really silent. There’s a total absence of vehicles, cellphones and city noise but the sound of the wind in the shrubs is almost overwhelming. As far out to the left and right of the train as I could see – there was absolutely nothing, and that’s fine with me. It’s peaceful, relaxing and completely breathtaking. 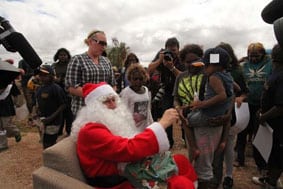 Cook is another iconic stop – for comic value if nothing else. The train stops for water where there used to be a bustling township. Now there’s a souvenir shop making the most of the train’s passengers and the desperation with which people clung on to life out here. You can walk through the deserted town, the grassed over swimming pool, the abandoned school and guesthouses. Rusted out 4WDs and painted advertisements make you chuckle with proclamations like “Get Sick! Our hospital needs you!”. The teatowels and postcards make great take home gifts!

And if all that isn’t enough wild Australian outback – as we bustled towards Perth, dinner was kangaroo loin. Delicious!

Tips for the tracks

– Bring a pair of comfortable walking shoes for stops, especially as you never know what creepy crawlies you might discover on your walking adventures.
– Catch a cab into central Adelaide and soak up the cafes & wine available on this stop. There are some great picture opportunities.