When travelling this mortal coil to soak up the wonders of different countries and experience new cultures, it’s not often you get to truly sit down and hang with the locals. In Bintan I got that chance and it was hilarious. 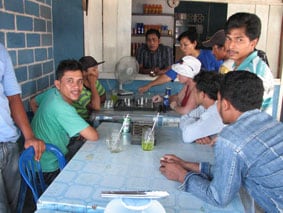 “Eat him!” shouted the Indonesian man standing beside me giving animated advice as the group of onlookers grew.  That phrase was about the extent of his English, so given that I was a chess novice with no better idea, I did. I shifted my bishop and ate my opponent’s queen. A bold move, but one that brought cheers from the crowd as clearly one of the sharpest players in the game slapped his hand to his forehead and took another drag of his cigarette across the formica table and I felt like the winner even though we’d only just begun.

I was sitting outside a café, if you could call it that, on the Indonesian island of Bintan, about an hour by ferry south of Singapore on the South China Sea. It was more like someone’s little kitchen really with a window from which to serve passersby. A small group of water taxi drivers waiting for their next fare were watching a game when I wandered over in search of a drink.

I asked the lady through the window for a beer and got my camera out to snap the busy scene. Within moments a chess board was opened in front of me and I was arranging plastic players while trying to explain my limited chess skills via hand movements and charades. It was useless, I was surrounded by eager assistants and so the duel began: four advisors and me against the man with the fag.

Bintan is the largest of the Riau Islands and its resorts serve as the weekend escape for families from nearby Malaysia, Singapore and Indonesia who come seeking respite on the beaches that encircle the jungle interior. The famed Komodo dragon lives here, but I didn’t see one, which was just as well as it most likely would have eaten me. They can smell their prey up to 2km away, I’m told. 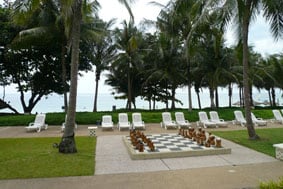 Club Med, one of about ten hotels dotted along the white sandy beach lapped by water so clear I could see my feet until I was over my head, is tantalisingly dangerous with all the food, all the drinks, all the relaxing time one can handle, all for the one flat price. And for the first couple of days I spun into a gluttonous frenzy until common sense presided and I knew I would be back tomorrow.

But curious as to what life outside the manicured lawns and 24/7 attention was like, I took a taxi to a wee village nearby for a spot of shopping where I snaffled up a pair of woven flax jandals. The humidity was causing havoc to my winter-white blistered feet and these worked wonders. Another driver met us and took the small posse of inquisitive kiwis to the fishing village of Tanjung Uban where I was to meet the locals chewing the fat and find myself playing chess in the noonday sun. 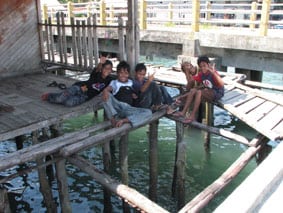 The cool cats of Tanjung Uban

The temperature soared around 35C as I first walked along the rickety wooden pier edged with family homes on stilts. Children played in makeshift sandpits and when I stopped to take photos, their mothers told them to smile and wave at the lady with the camera stuck to her face, or words to that effect.

I walked through an open-air café where a four-year old was throwing a tantrum. His mother didn’t look too bothered as he hurled anger and coke cans around while bemused patrons shouted encouragement. Within minutes he was in tears on his mother’s lap. Ahh kids are the same wherever you go. 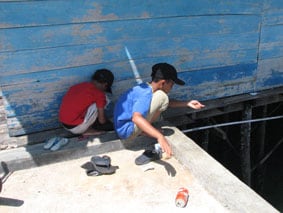 Behind the café two ten-year old boys squatted on their haunches fishing for tiny morsels from a line wound around a stick of wood. They were being so secretive I wondered what it was they were catching. Important boy stuff I supposed, and left them to it.

Further along, a group of teenage boys were holding a somersault diving competition and called me over. Posing together like a soccer team, I took their pictures then one by one they flipped, flopped and flung themselves into the sea. I wanted to do the same as the heat weighed like a heavy eiderdown on a January afternoon. But decided a nice cool beer would do the trick.

The main street is lined with run-down shops selling shoes, plastic buckets, mops and motorbike repair shops. In fact there are so many motorbikes whizzing around that this would be the most lucrative trade, should I want to start a business here. But deciding on more important matters like where I might get a drink, I found myself at the game of chess in front of the tiny shop almost tucked out of sight and with the help of my panel of advisors (and a little grace from my opponent who would question my sillier moves) I ‘ate’ more pieces and won the match amid much cheering and high-fiving.