I’ve done 9 cruises now. Ten if you count driving yourself up the Murray in a houseboat. So here are the things I wanted to know before I boarded and I thought maybe you do too. 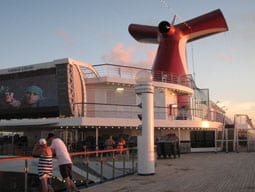 Watching an outdoor movie in the middle of the Caribbean

It depends on where you’re going. If you plan to cruise from Auckland to the Pacific Islands, then most likely you will need your sealegs for the first couple of days as that is right out there on the serious high seas. But if you’re tootling around the Caribbean when the Gulf of Mexico is like a Mill Pond (as it was when I went) then you’ll barely notice you’re moving. Even the movement of river cruising can be strange at first.

But here’s a tip I learned when I used to do a bit of sailing on smaller yachts and would get terribly sick, close your eyes and imagine you’re somewhere else – on a train or a plane. Seriously it works! I found for me much of it was mind over matter. The movement tends to make you sleepy though, but hey, what’s so bad about relaxing and snoozing on your first day at sea anyway?

2. Can you take your own alcohol on board?

Not usually. Even though you might be able to buy Duty Free booze at the cruise terminal, there will be restrictions on being able to actually drink it onboard. Dumb I know. So here’s a sneaky tip – I’ve not yet been through a cruise terminal that scanned your bags for liquids. Poor your gin or vodka into water bottles and chance it. What’s the worst that can happen? It’ll get confiscated, but if it doesn’t you’ll enjoy a little mid-afternoon noggin on your balcony with that book you’ve been meaning to read. (You didn’t hear this from me!) 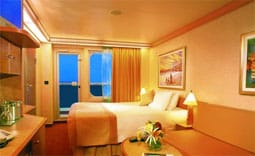 3. Is there much room for luggage?

Again it depends on which ship you’re on. On our Murray River houseboat no, although there was lots of cupboard space so we unpacked and stacked our empty suitcases on top of each other in the corner. But on both the cruises I’ve done to Alaska on Holland America and the Caribbean on Carnival, yes it was surprisingly roomy with wardrobes you can stick your bags in.

Here’s a tip: you’ll need to take a smaller day-pack for your final night on the big ships as all luggage is collected from outside your cabin the night before departure. That means your clothes for that day, toiletries and jarmies need to fit in this little bag.

4. Are the bathrooms pokey?

No not at all. This is always the biggest surprise. The toilet will most likely be a vacuum flush and the decibels can be right up there, but you’ll have a full size shower and if you have a toilet bag with a hook, you can dangle it on your towel rail. You can also do some hand washing and line up all your smalls across your shower to dry on the ships I’ve been on. 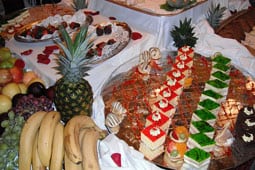 Fantastic. On the big cruise ships typically breakfast and lunch will be in a huge buffet hall so you can pick and choose from fruit and cereals to pancakes and cooked breakfasts. Lunch is buffet and will change daily but there will be little kiosks also serving things like burgers and nachos. Dinners are usually in a separate restaurant and you’ll have your own designated table for the entire cruise with your own servers who you’ll get to know by name. Dinner is a la carte and despite the kitchen churning out up to 3000 meals, I have always found the food to be excellent. The bigger ships also have other restaurants where you can pay a nominal fee and treat yourself to something different – like lobster.

If you have more questions, you might find them in this post: 10 things to know BEFORE you cruise>>