If it’s true that the elephant never forgets, then each year in Thailand the theory is put to the test as the huge proboscideans play in a polo tournament – and try to remember the rules. 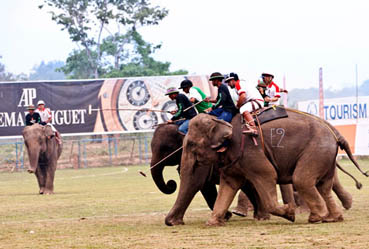 Several international teams compete in the Kings Cup Elephant Polo Tournament conjuring up images of Harry Potter’s quidditch matches. But short of securing a troupe of flying Dumbos, the mind boggles as to just how these lumbering beasts play the game.

Deciding to find out how they manoeuvre about with people perched on top, I went for an elephant ride in a park just outside the town of Hua Hin, about 200 kms south of Bangkok.

The ricketty Fred Flintstone-like steps led up to the makeshift treehouse where our big grey carriage was waiting. We sat two abreast on a perilously flimsy looking seat secured only by a long strap around the giant girth and the guide told us to stretch a seatbelt across our laps and buckle up. If things turned ugly I wasn’t sure whether our little seat would stay put. Certainly the seatbelt wouldn’t have kept us from danger, but before I had time to mull over my options, we started to lope along the dirt road.

The mahout (driver) was perched down in front of us on the big leathery neck and used his bare feet to steer, pushing the enormous ears left or right. These men are elephant trainers and have been caring for their charge since birth. At about four years old the elephant is ready to be trained for working (like horses, elephants are working animals in Thailand) and for carrying people like us.

We wandered around under the stifling humidity in long lurching strides, when suddenly a cell phone rang and our mahout pulled it out of his scruffy clothes and took the call. This may be a remote elephant park in Thailand, but cell phone coverage obviously knows few bounds and gadgets are plentiful here. Within moments the guy sitting next to me took a call from the office in Auckland wondering where on earth he was. If only they knew.

The journey took us past temples being refurbished, between trees and up tracks, and I imagined how I’d cope with a polo stick in my hand trying to hit a ball about three metres below me while the mahout did the driving. Eventually we came to a swampy brown pool and as our colossal carriage walked down the steep dirt track to the water’s edge, I looked back at the other two beasts in our party bearing down on us and hoped their enormous feet wouldn’t slip and usher us into the swamp with indecent haste.

But all was well and we blazed a slow-motion trail through the water having to lift our feet off his coarsely-haired back so they wouldn’t get wet. Soon his trunk became a snorkel as the water crept up to his eyes and I turned back to take a photo only to find that this wasn’t just a drinking hole for thirsty elephants but doubled as the toilet. Suffice it to say the others stayed on the bank until we reached the far side and our exhaust had cleared.

The remainder of the half-hour ride was punctuated by huge wet elephant sneezes which left parts of the swamp clinging to our legs eliciting grateful remarks from the uninitiated on top.

Today about 4,400 of the national icons live in Thailand, and nearly 2000 of these have been domesticated, meaning they are brought into the towns and villages and often left to roam aimlessly, getting into all sorts of trouble, while their mahout looks for work.

Hence the polo tournament. The elephant needs money – or at least the organisations do that protect it and provide for its medical care and overall welfare.

You may jest, but elephant polo is a serious business in this part of the world and is played according to international rules. In 1982, the World Elephant Polo Association was founded in Nepal which established clear guidelines for matches. Ten international teams from as far away as Germany and Britain will be competing at the tournament played over five days at the Som Dej Phra Suriyothai military ground near Hua Hin. Each team consists of three elephants playing on a pitch one-third the size of a regular polo field in two seven-minute chukkers.

With our reconnaissance ride over, we ambled back to the treehut depot and for 20 baht (85 cents) I bought a bunch of bananas to thank my big grey friend for the educational ride. As he delicately removed each one from my hand with the tip of his trunk and popped into his mouth I realised that these guys aren’t just clumsy oafs after all.