The two year anniversary of the terrible Christchurch earthquake on February 11, 2011, that brought buildings down in the CBD and broke homes in the surrounding suburbs, killing 185 people, has just passed. 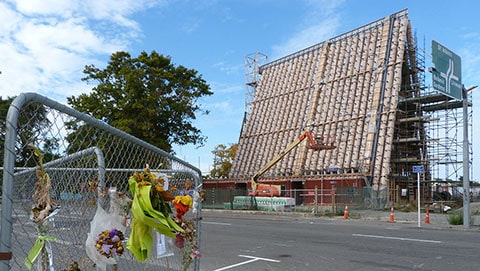 The new Cardboard Cathedral stands opposite the site of the CTV building collapse.

The Sydney Morning Herald named this 700-seat transitional cathedral as the 9th best new attraction for globetrotters to visit in 2013!

It’s a controversial subject down here. Some like it, some hate it. Some want the insurance money spent on the restoration of the old Cathedral, some think this one-of-a-kind building will be a tourist attraction and hope it’ll have multi uses.

Each cardboard wrapped tube weighs 120kg forming the cathedral’s skeleton. It is the first time cardboard tube cladding has been used in New Zealand. 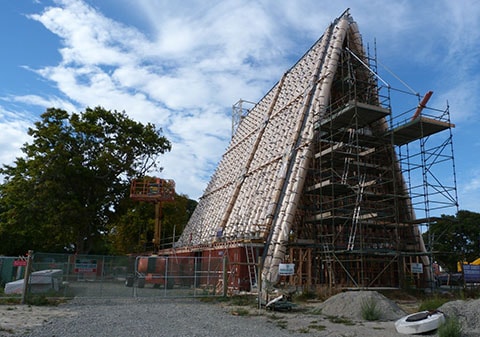 The Cathedral is coming together

The cordon is closer now to the old Cathedral providing a sombre look at the regal building standing in a heap. I’d love to see part of it restored and the remainder wrapped in glass as a timeless reminder of what the city’s been through. 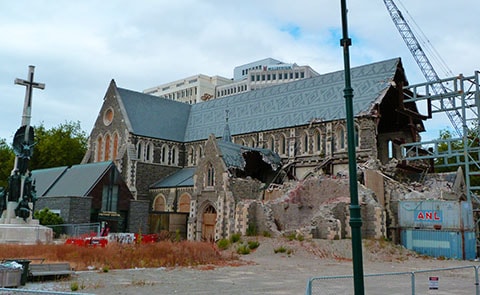 This is one of the most moving memorials in the city: 185 white painted chairs, each representing a person who died on February 22, 2011. There’s large rocking chairs, high chairs and baby car seats and today they each have a potted plant at their feet to remember them two years on. 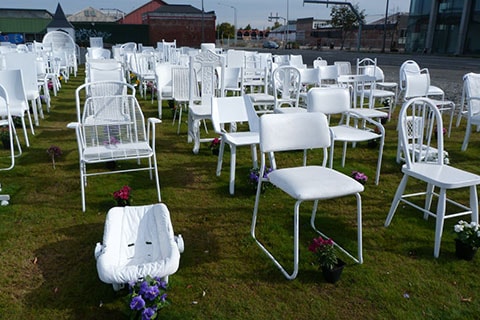 Each white chair represents a person who died on February 22, 2011

The AMI Stadium stands untouched, waiting its turn to be demolished. Ironically it had just had several million dollars spent on it a couple of years before the quake. The seats will apparently be used in the new stadium as the ground here has been declared unfit to build on. 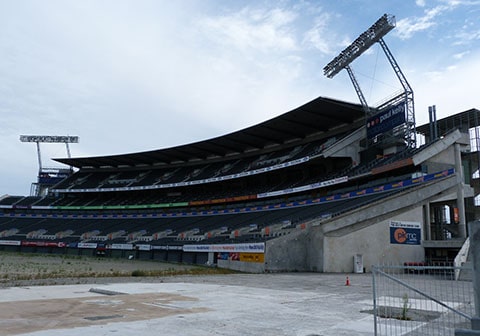 The streets around the stadium are like a ghost town

My husband tells me some of his sweat is on this ground from his Marist days. I think he hopes they’ll enshrine a piece of the hallowed turf in a glass case!

Back in town and Victoria Street is where you hang out now for bars and restaurants. This is Smash Palace, a bus serving burgers and beer at picnic tables with school chairs. In winter they provide blankets and hot water bottles. 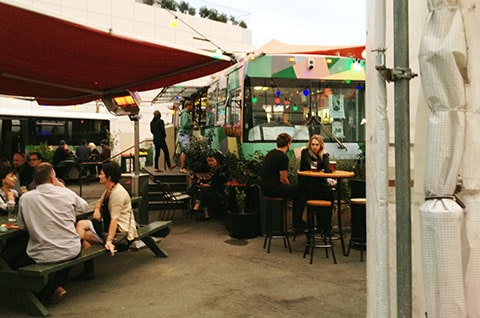 Smash Palace: The older crowd is replaced by hip young things from about 9pm on…

Across the road Knox Church is the same as it was 6 months ago, but I’m told plans are in place to restore it. 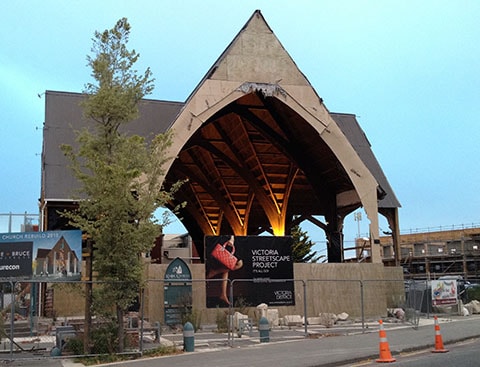 The Catholic Cathedral is untouched from 6 months ago, still shored up by shipping containers and hay bales and large pieces of cornice work lies on the ground, presumably to be used in any restoration. 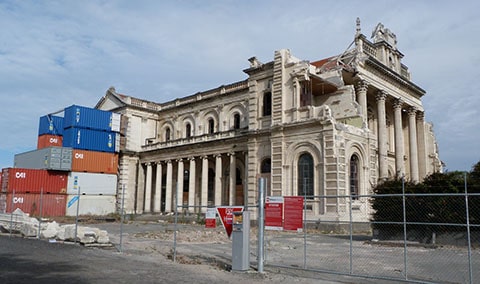 Waiting to be fixed

And these two watch over the city from the top of the cathedral, waiting their turn… 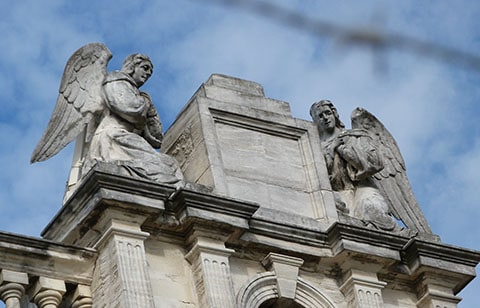 Meanwhile the Cassells family are pressing ahead with their Tannery project and expect the first of their new boutique arcade of shops in Woolston to be open in April. The Brewery is still popular for its pizzas and beer. 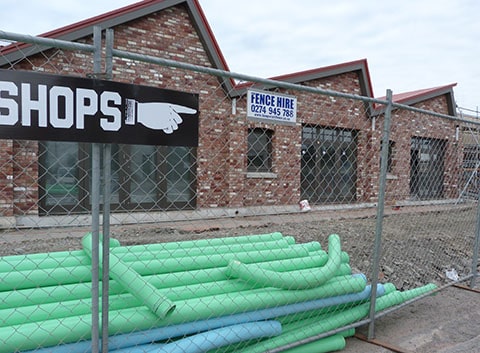 The Tannery in Woolston will house high end boutique shops

New Regent Street has been lovingly restored and is not far from reopening. 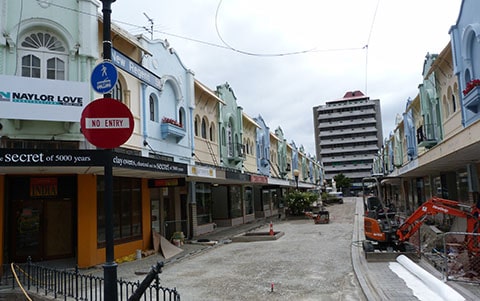 New Regent Street is just putting her lippy on 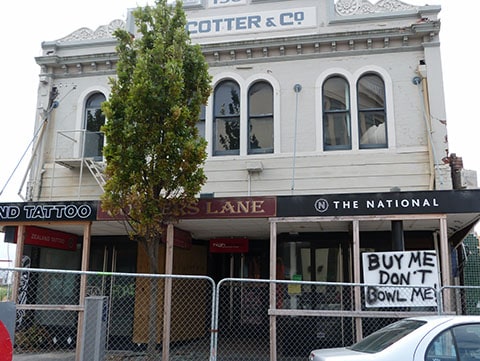 A building cries out to be saved!

If you used to eat and drink down here on The Strip, this new scene is jarring. But on the positive side, it’s now ready for redevelopment. 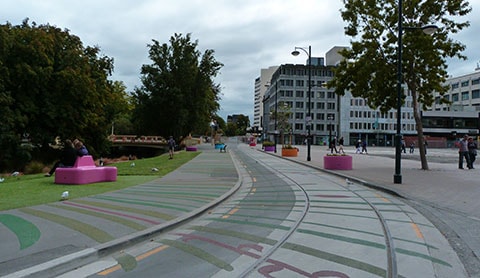 The Strip is now just a cleared street

The view from my hotel over the ReStart pop up container mall. The Ibis is one of the few CBD hotels that have opened to begin welcoming visitors back to Christchurch. And Lord knows they need it. 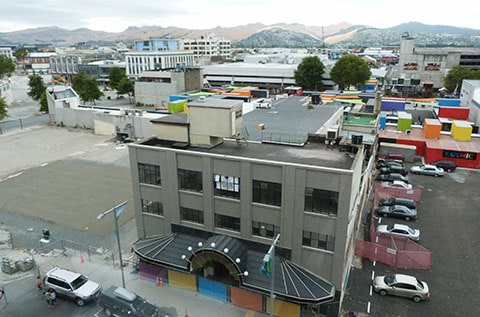