As some of you will know, I have been running Blog Training and Content Marketing Training courses, and this is one of the topics I teach: How to grow your Facebook fan base. Because the more fans you have, even though Facebook only let about 5% of them see your updates, the further the reach for your paid/sponsored posts.

Yes, I said paid/sponsored posts. Unfortunately this is the cold, harsh reality of doing business with Facebook, and to be expected really. There ain’t no such thing as a free lunch. And since over 500,000,000 are enjoying free Facebook lunches, you and I, who want to get in front of just a slither of them with our product or service, need to cough up.

In New Zealand we had a change to our liquor laws recently. Suddenly, where we used to be able to give away wine as prizes, we can no longer promote alcohol. It’s a shame because up until then I had seen enormous success in running little competitions to win 6 bottles of New Zealand wine. It’s amazing how many people get excited about wine!

But over the last few weeks I have tried something else. 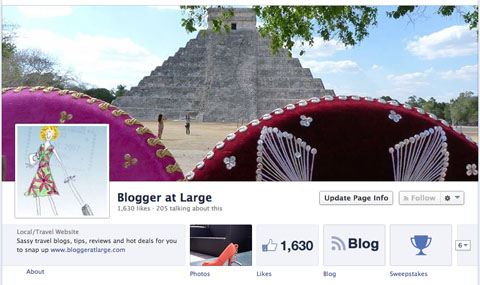 I have been offered some double passes to the upcoming Cuisine CheeseFest here in Auckland, valued at $30 per ticket. So I decided to give them away via my Facebook fan page.

I wrote a status update telling the fans that I already had to simply “like” this update and they’ll be in the draw and 44 of them have responded.

Then I set up an ad campaign and capped it at A$6 per day. These ads allow you to choose up to 6 images that will be displayed at various times to the demographic you select. It means you can easily see which pic works best. I also selected that the ad be shown only to Aucklanders and those within a 50 mile radius, and those who were NOT already fans of Blogger at Large, but WERE friends of fans of Blogger at Large, because familiarity to a brand adds trust and works better than promoting yourself cold.

Tip: A general observation about prizes seems to be that the lesser the value, the more entries you will receive. I guess when you put up a high-ticket item like a trip, people figure they don’t stand a chance. But when it’s tickets to the CheeseFest, they’re all in.

I’ve decided to continue my $6 spend until I draw the prize in another week, so will report back on the final uptake then.