I stood on the intersection of Queen and Victoria Streets and had a chat with the 54-year old Santa who used to be known for his creepiness, and to be honest, even after his extreme makeover, is still creepy. But he’s now so iconic that we couldn’t have him any other way. 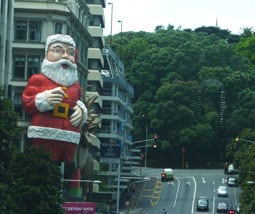 The new Santa with silenced finger and eyelid

Auckland’s hulking Santa is 54 this year and after much fighting to see him stand over Queen Street once again, love him or hate him, you can’t miss the big guy.

He’s 21-metres tall with a tremendous 27m girth and looks knowingly down from the Whitcoulls building. But his dodgy wink and come-hither finger that had brought him much flak over the years and more than a little bad press, is gone after a visit to the fibreglass surgeon.

But ask Santa what he’s seen since 1960 and he’ll tell you a lot of naughty and nice since he first stood on the old Farmers Building (now Heritage Hotel) on Hobson St.

He remembers how easy it was delivering presents to boys and girls when Auckland’s population was half a million in 1964, and then how he had to put new stream-lined delivery systems in place when it reached 1 million in ’96.

He remembers the naughty towaway zones being introduced in 1967 and the rioters on Queen Street in ’84, the same year (nicely) that tolls were abolished on the Harbour Bridge, and he also sees exactly who those boy racers are each night! 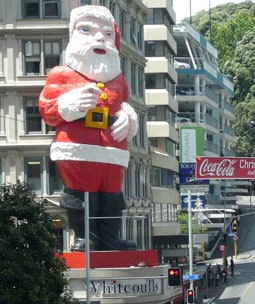 The old winky Santa with the creepy finger

Indeed Santa sees everything. (That’s how he knows who to bring gifts to each year.) But there was a time when he was down and out and found abandoned in a rubbish dump in Mangere (he didn’t want to talk too much about this).

What I managed to find out later was that he and his reindeer were dumped from the Farmers Buildings and a kindly gentleman bought him for $1. He then met some Whitcoulls big wigs who helped find the thousands of dollars needed to rebuild him and give him a new home.

Maybe Santa was just misunderstood. His bad press was, quite frankly, because he was ugly. Shame on us, that’s not polite! But he is expensive to run and avoiding arthritis in that finger was only the start of the costs.

This year again he was nearly a gonna with Whitcoulls having to make a tough call about whether he would even make it onto the roof due to his hefty installation costs. A dramatic rescue plan was hatched and thankfully he is still here today – facelift and all.