If you’re not already in the know (and I wasn’t until an hour ago), the classy Roosevelt Hotel on Hollywood Boulevard has many faces for the many faces who frequent the hipster pool bar with it’s lounge music during the day and DJ tunes at night, the opening parties of movie premieres across the road at the Dolby Theatre, exclusive VIPs and celebs who book out the quiet nooks for bars – and the twice-weekly hottest ticket in town. 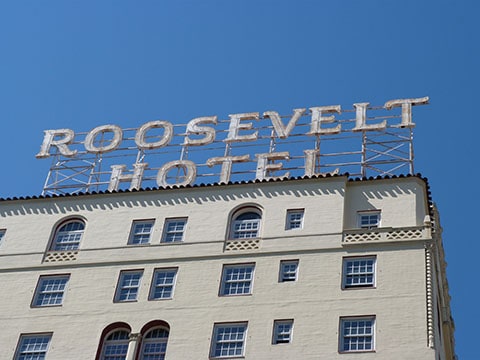 Standing on Hollywood Boulevard to photograph the famous sign

The faces I’m talking about are the ones that drop $1000 a night for a table (and we’re talking teeny coffee-sized table for holding drinks only) to get a seat at the twice-weekly Beacher’s Madhouse show in the basement.

Entry is behind a hidden bookcase in the lower lobby of this hotel built in the 1920s. It’s where Marilyn Monroe lived for a year before she got her break and where (apparently) JFK would come calling. Her first modelling shoot was on a diving board at the pool outside my room. The pool is still here but the diving board is not. I digress… 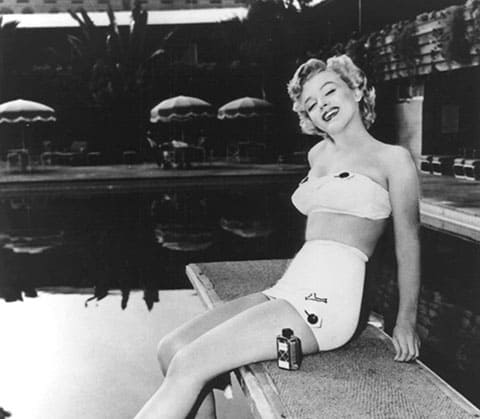 That famous pic. Shame the diving board isn’t still here or I’d be sitting on it.

Step behind the bookcase and walk through the narrow hall draped in red velvet curtains and hung with monstrous mirrors into the bar which on a Wednesday and Saturday night are packed wall to wall. Drop $10K and your peeps can sit in the cabana. Or Miley’s peeps do anyway. A piddly $1ooo and they can crowd around the mini table – like the one my granddad had with a built in ashtray on the side.

So let’s get the party started…

Kelly Osbourne performs here often. Miley perfected her twerking here long before the MTV music video awards – and she’s not yet old enough to drink. Billy-Ray do you know where your daughter is?! If you spend a lot of money here you get your own name plaque on a table. She has her own plaque. If you don’t have a thousand for a table, just buy a $100 ticket to stand in the aisles and drinks start around $20. 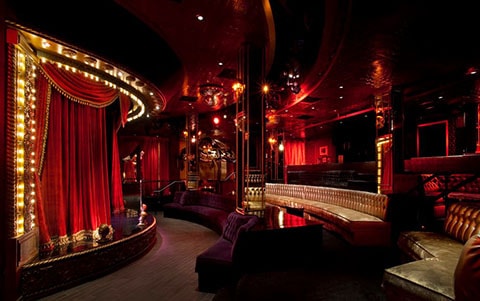 But it’s much more than a bar. Or a club. It’s a show hosted by controversial entertainer Jeff Beacher who was banned from the MGM in Vegas for diving into their fish tank about 6 years ago. Incidentally they regretted their decision to not only have him arrested, but thrown out never to return again because 2 nights a week he’s turning $50,000 over here in 3 hours at the Roosevelt in drinks alone. But the MGM knows how to grovel and now the mighty Beacher has signed a $100 million contract to open another one of these crazy part cabaret/burlesque/comedy/bawdy shows where? You guessed it.

Performers include Elmo, burlesque dancers with tassels where bras should be, midgets (yes they actually call them that and have a bar for little people with little drinks and a low counter). When you order a bottle an oompa loompa will fly across the ceiling in a harness and bring it to you. It’s packed with people, so flying is really the only way around. Every celebrity worth their weight in sniffing salts comes here – and usually stumbles out afterwards to be snapped by the waiting paps. It doesn’t take itself – or the people it’s taking the mickey out of – seriously. And that, it seems, is its mega money charm. 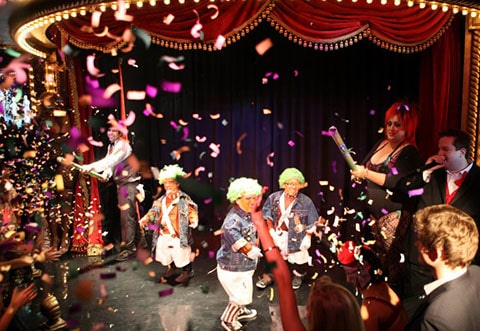 There are no words…

When: Wednesday and Saturday nights from 11pm

Cost: You’ll need at least $300 just to slip in the door and have a couple of drinks