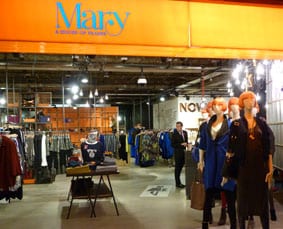 Mary’s shop on Level 3 at House of Fraser

I stumbled upon Mary Portas, the London guru of fashion and shop design, on an Air New Zealand’s entertainment a while back and instantly fell in love with her.

She’s a 50-something stylish, sassy, red head and she tells struggling small retailers like it is in her series Mary Portas Queen of Shops, where she comes in and transforms their businesses into profit making marvels – but not without it’s trials and tribulations. 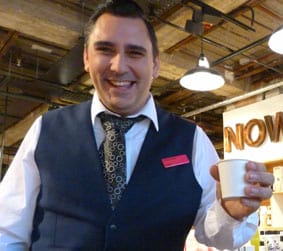 Mark brings me a “proper” flat white in the shop

But the series I most enjoyed was Mary Portas Queen of Frocks. In this one she decided there was a gap in the market for great clothes for women over 40, so she created her own range, successfully pitched it to House of Fraser on London’s Oxford Street – and that is where I found myself. Hanging out like a groupie with her staff who were on the show and chatting about everything from Mary’s new series coming up “Kinky Knickers – Mary’s bottom line” to where to get a good curry.

Mark, Katie and Becky all chatted like long lost friends and even made me a coffee with beans ground from Katie’s boyfriend James at his company up north, The Blending Room. It was the best flat white you can get in London! 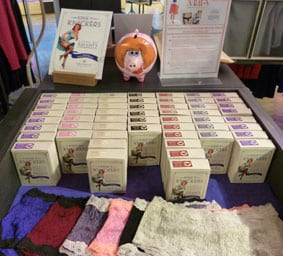 Kinky Knickers is the next TV series of 3 episodes in which she laments the state of British manufacturing having closed down and clothes now made off-shore, so she recruits a few unemployed machinists in Manchester to sew her knickers.

And now the bombshell with the sharp orange bob has been commissioned by the government to overhaul the High Street. No mean feat and I can’t wait to see how it all comes together.

If you want to see the “stars” on Oxford Street at her shop – or buy fashion for over 40, head to the 3rd floor of House of Fraser. 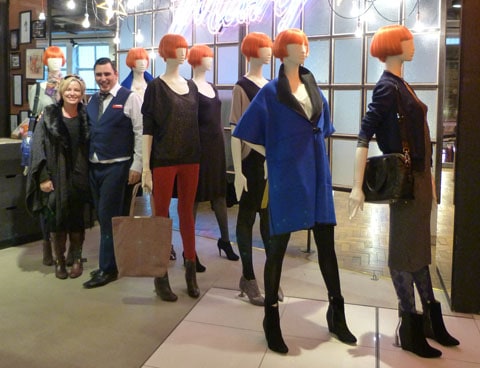 Which one of these is not like the others