Soon after I returned home from the mandatory OE in London several years ago, I popped back for a catch up with friends, shopping and to eat cheap curries.

But as I tubed in from Heathrow, my first thought was not, “get me to Oxford Street” or even bemoaning how much I just paid for my ticket when you convert it, but that this city could do with a jolly good water-blast. 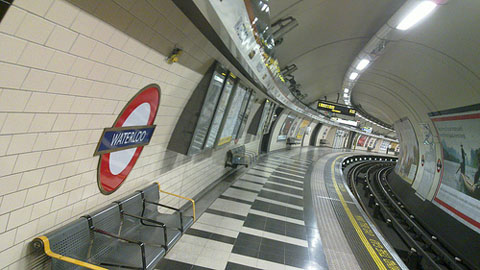 An amazing shot of busy Waterloo Station without a soul in sight! (Pic Flickr/whatleydude)

It’s scary what you get used to when you live in it. I used to think the grimy walls and littered streets added character and that black hankies at the end of the day courtesy of public transport was a necessary by-product of a busy city. 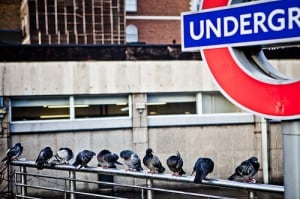 I’d also forgotten what it was like to ride the tube again and took a couple of days to re-orientate before I became just like the other seasoned, gravity-defying commuters, as they somehow use their toes and not their hands to keep balance.

But for all their British commonsense, some people have no concept of what the effect a moving train is going to have on their person. Just as we are about to pull out of the station, someone will invariably teeter up the aisle stepping over laptops and black polished shoes, only to rush maniacally for the centre pole as the tube jolts away from the platform. All eyes are on them as they gasp like one who has escaped near death.

I made the error of returning from a hard day’s shopping smack on rush hour on the Central Line. I’d forgotten just how packed the tube can get. When you absolutely cannot squeeze up any further, three more people will somehow get on and shuffle their bodies around to get their stance and grip of the overhead bar organised. All without so much as an “excuse me” or “do you mind if I hug you?” as they stand with their groin pressed into their neighbours handbag.

No one talks. The clattering din is enough to render most people speechless – except the cell phone users who have to scream at their caller as if at a football match while the tube whizzes through the 400-km spaghetti of tunnels that make up the London Underground. With noses fixed firmly into armpits and no way of seeing the station names due to the sea of suits holding the overhead bar, some inner city workers prefer cycling into the office on a nice day. It certainly beats being stopped in a tunnel with no air conditioning when it’s boiling out. Mind you, if you’re not contending with the tube, you’ve got to perfect the art of maintaining your balance as busses speed past creating a veritable vortex. 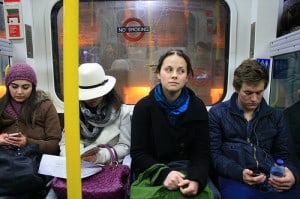 I just love this pic! (Flickr/plusgood)

When the train isn’t quite as crowded and travellers can once again utilise their personal space, out come the novels and daily papers. You can tell the regulars, they’re the ones who’ve learned to use their bodies like a gimbal and while the train rocks and rolls through tunnels their newspaper doesn’t. But they do get very irritable should their neighbour try and read over their shoulder. I noticed the subtle art of shaking the paper or refolding it to deter the cheapskate, who should have paid 65p and bought his own.

You can tell a lot about someone by the way they talk on their phone too. Some will answer their siren with an embarrassed hello and talk so quietly I wonder if the person on the other end thinks they’ve phoned the library. Others just love it. Their phone rings some little ditty that stays in your head all morning, and they go about, very loudly, organising their personal lives, all the while digging their toes in and never toppling once.

Ahh London, how I missed you.