Red flags were flying for a few weeks before we left New Zealand, but it’s only with the benefit of hindsight that we are able to interpret them. 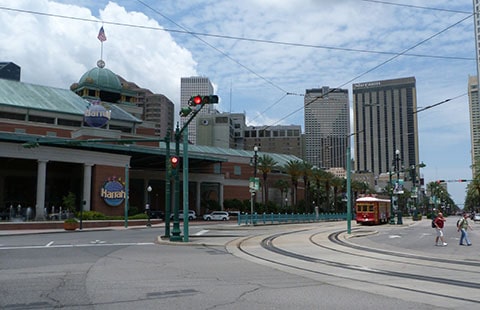 We were to be having a three-generation family reunion in New Orleans at the end of our music roadie from Nashville and Memphis.

We decided to book a house on VRBO. This is a site for property owners to list their own houses. I’ll be interested to see if my review get approved. If not, then that means the owners control what is said and I will certainly let you know.

I’m sure it’s a great site, it’s just that our experience with this particular owner was dodgy from the start.

The plan to get a house and a big car was good. The house we chose was a disgrace. Only we didn’t realise that until we had paid the first night deposit (US$295) and my brother turned up before we did.  He texted as were still en route (it’s 6 hours to drive from Memphis to New Orleans) to let us know that he didn’t think we’d want to stay here for 4 days. Much text banter and finally a phone call ensued. 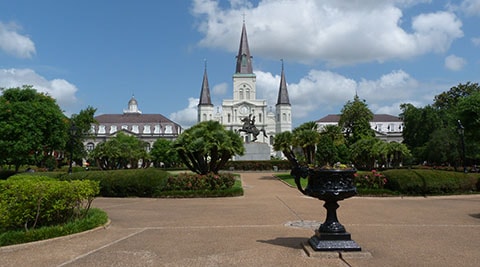 Jackson Square, surrounded by local art for sale, buskers and horses and carriages in the French Quarter

• The address is hidden on VRBO website. Why? I suspect it’s because the owner doesn’t want potential guests to see just how far away it is – in Arabi, next to the Lower Ninth Ward, still surrounded by houses with X on the walls. 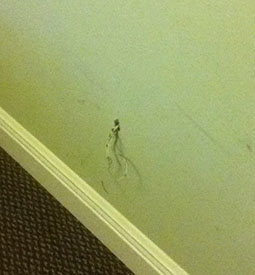 This is not good enough if you rent your property out!

• I had emailed the owner from NZ when I realised we had paid our deposit but still had no physical address. After he replied I found it on Google Maps and was shocked to see it looked like a run-down shed. I emailed the link to the owner who said no this wasn’t the property, it was next door and was a lot nicer. But when we typed it into the GPS coming into NOLA, it didn’t exist.

• Meanwhile the taxi driver from the airport told Rich and Ness in 10 years he’d never delivered visitors out here – after they pulled over and asked a neighbour where the house was. Turns out they were right next door. He insisted as he left that they keep their windows and doors locked.

So my 4-year old niece and her parents were now left there looking around the house about 10 miles from the French Quarter (what were we thinking?!) The house was unlocked and the key was on the bench inside with a phone number to call the owner. 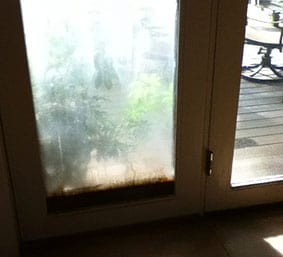 How long since this door has been cleaned?!

• They phoned and he asked when he could come over and collect the balance and how were we paying? No, welcome to New Orleans, I’ll come over with a bottle of wine soon (which is what other reviewers have said he did). This was the biggest red flag of all. He was coming to collect the full balance before we’d even stayed one night. As we processed all these things it ocurred to us that he must have had people up and leave before and wanted to make sure we weren’t going to do the same thing.

• The swimming pool we had planned to spend loads of time in is in fact communal with 3 other properties.

• Wires were hanging out of the wall and a hole had been punched into a door.

• The windows were covered in mould and leaning so they looked like they’d fall out.

• There was no gas bottle with bbq – although maybe the owner would have showed us where that was?

• AND bugs bit my brother’s legs and arms in the few minutes inside. 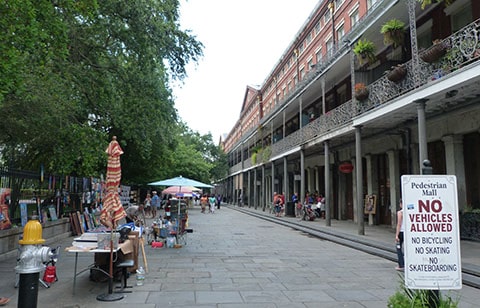 Great art hangs on the railings around Jackson Square

In the car we 4 made the decision to write off the deposit dad had prepaid and get out of there before we stayed a night. That way we wouldn’t be confronted by a potentially irate owner.

I’ve been to New Orleans before and last time was hosted by Harrahs Hotel and Casino. It has views over the Mississippi and is a block from Canal Street, easy walking to the French Quarter and trolly cars.

Richie did a fist pump at the prospect that we’d be staying at the casino! They managed to get a taxi to find them and fled.

So finally, a big thanks to Harrah’s for being our salvation and for the great room rate they gave us on 3 rooms.