This is a guest post by Catherine Sietkiewicz, an expat kiwi who now calls Melbourne home. 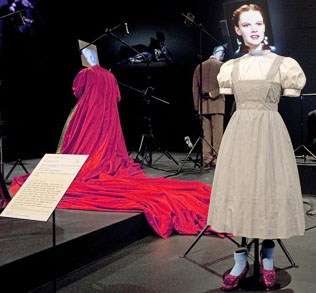 Dorothy’s magic shoes that every little girl pined over

I remember sitting cross legged on the carpet of my parents’ house as a young girl, eyes glued to the convex screen of our old TV watching Dorothy’s pale blue and white gingham dress float over the yellow brick road on the way to Oz and turning completely green with envy, the exact shade as the Wicked Witch of the West, at her glittering, sequined shoes.

As of yesterday at the Australian Centre for the Moving Image’s (ACMI) Hollywood Costume exhibition I will forever be able to say that I, cross-legged, glue-eyed Catherine, was inches away from those exact same Ruby Slippers.

Hollywood Costume is infinitely more than just a collection of garments, it’s an invitation to walk amongst the spirit of the most memorable characters from the greatest films of the last century from Tyler Durden’s red leather jacket in “Fight Club” dyed the colour of dried blood, to the silk and glass beaded shimmering waterfall of a dress that Irene slinked about in in “My Man Godfrey.”

The exhibition has a cinematography all of its own and just like the films the pieces were in, has been beautifully directed for optimum perusing pleasure of the 100 costumes it boasts with interviews from directors, actors and the designers who brought the characters to life through the pieces they chose .

The Australian Centre for the Moving Image is an attraction worth writing in bold, highlighting, and drawing stars around on your list of “stuff to do in Melbourne” and with the Hollywood Costume exhibition open daily until the 18th of August, you might need to put it at the very top.