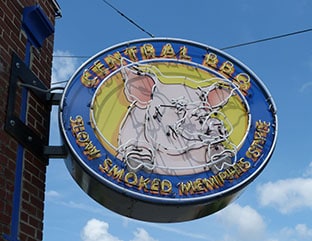 There ain’t no better place for bbq than Central BBQ

Before I even got here I’d been trawling the interweb and asking folks left and right for advice on where the best barbecue in Memphis was. Because it’s only right that if you go to Memphis you eat pulled pork, ribs and smoked bbq.

I can now tell you that the one I found, and which came highly recommended AND I got to show up first thing in the morning and watch them prepare the meat is Central BBQ.

JC Youngblood is the man with the apt name who runs the newest location in downtown Memphis, just behind the Lorraine Motel and Civil Rights Museum. Two locally painted murals adorn the walls in the outdoor part and a former urinal (or something that looks suspiciously like it) now holds the tap beer. 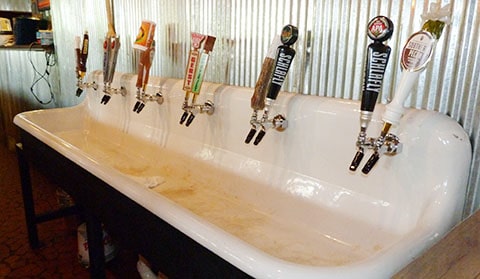 The guys who started this group of now 3 BBQ restaurants are all competition barbecuers. It’s big in this town. And if you’re here in May, make sure you come for Memphis in May. 15o tents of competitors line the river bank vying for best bbq master in all the land featuring lots of different styles of cooking.

How to make spicy barbecue beans: 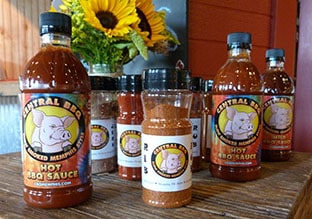 The spices are premixed. I have the full set now.

We rocked up at 9am Monday, me and 5 taggers-on that decided learning the secrets of how to make pork bbq was more important than sight-seeing or shopping. JC let us first try his barbecue baked beans. During our chat I managed to eke out at least the main ingredients of this deliciously smokey side.

To do it home, start with tinned baked beans in tomato sauce and add smokey bbq sauce, mustard, chilli, cumin, cayenne, paprika, garlic and pork fat. Ok so that last item is not something you’re likely to have in the fridge, but I reckon this’ll taste superb without the fat.

He then whipped out a basket of kettle fries that had been refried then sprinkled with his own seasoning (which I now own) and a shake of kosher salt. From what I can tell, kosher salt is what we call sea salt.

But it was the melt-in-your-mouth pork shoulder that I’d come for and JC didn’t hold back on giving the scoop. 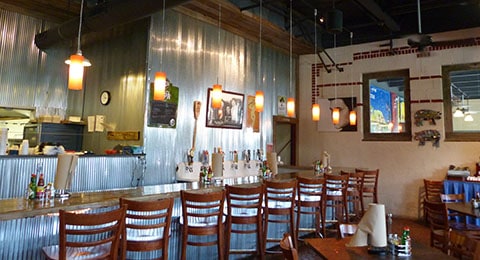 Even if you don’t have a smoker, I’ve successfully made their pork BBQ at home.

How to make slow-cooked Memphis pork barbecue at home:

Dry rubs are what they use down here, which is pretty much the above flavours that he uses in the beans. Buy a good spicy dry rub with cayenne pepper, paprika, garlic and salt and rub liberally into the meat. The skin will be pulled off and thrown away (or you can whip it under the grill to make crackling) after it’s cooked.

Let it marinate in the fridge for 6-8 hours (overnight), then put it into the smoker to cook slowly on a low temperature for 12-14 hours. I put mine into the oven the next morning on about 120C for 8 hours. I covered it with foil which created juices from the meat and spices which I saved to pour over the pulled meat later. Remove the foil about halfway through cooking to crisp up the “bark” – the spiced meat on the outside. 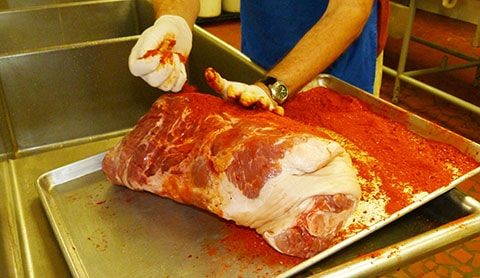 Rub the dry marinade in liberally 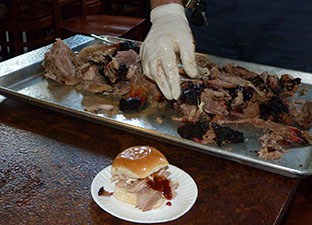 They smoke everything here, chicken, pork ribs, beef brisket, turkey and the best of all the slow cooked shoulder that literally fell apart when JC got one to “bust open” for us to sample. Out came some mini burger buns and coleslaw to make little hot pulled pork sliders. That was brunch and we’ll be back tonight to try the rest of the menu!

At home, add roast veges and coleslaw and little buns if you really want to Americanise it 🙂