2012: I was invited with a small media throng to Auckland Airport to inspect the fancy new Boeing 787 Dreamliner that winged its way here to show us a taste of things to come. 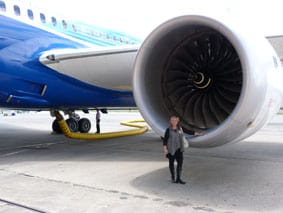 It’s so light it flies on 2 engines

First we met Christopher Luxon, the Air NZ CEO who told us about his first ever flight from Auckland to Christchurch aged 8 when his mother made he and his brothers linen safari suits for flying in. Cute! That was back when a flight was a big deal.

But from what I saw and heard, I reckon when this new 787 finally loads its first passenger in 2014, it will be a big deal. 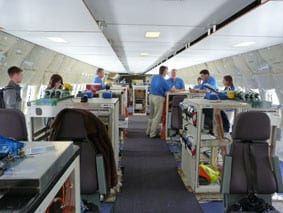 I got to have a chinwag with several of the Boeing flight crew and test pilots who brought the big girl down. One thing that was commented on by Mike Sinnett, the senior Vice Pres of the 787 project from Boeing who is and also a pilot is that this new aircraft is a revolution not an evolution.

Ok, so cutting to the chase, here’s why the new 787 Dreamliner is making plane spotters gasp: 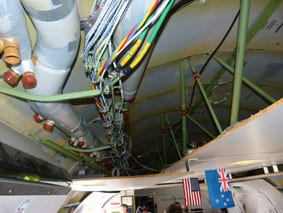 The 787 crew rest. Use your imagination folks.

The technology began being designed for this 10 years ago.

Firstly its made of plastic. Carbon fibre composites to be exact. That means its lighter and more bendable and ultimately leads to the 20% reduction in fuel and making it 30% more cost effective.

It also has fancy turbulence suppression gadgets – officially called Smoother Ride Technology. That’s good news for crew serving coffee and those of you who are prone to a little turbulent-related panic. What it means for pilots is that gusty landings can be more easily handled too. In fact this turbulence correction is still being refined, I was told today, so by the time Air NZ takes delivery I’m imagining a flight so smooth it’ll be like being teleported. 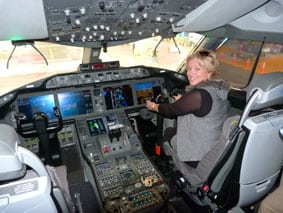 For passengers the big noticeablity will be in the cabin pressure feeling more like 5,500-6,000 feet rather than the current 8,000 feet. That might not sound like a big deal but the team who flew down from Seattle to Auckland were explaining how different they felt. Less weary, less jetlag due to more humidity in the cabin leading to less dehydration, more moisture in the mucous membranes (that’s how they said it not me!), more oxygen in the bloodstream. Less fat head feeling (that’s how I said it, not them).

The other nice change is the bigger windows. They have no shades, but a 5-step dimming switch that is operated by the window passenger and the crew. It means that people from the middle seats can see the horizon (less motion sickness) and taller people can even see over the heads and out windows.

For airplane boffins, the brakes are electric not hydraulic and in their testing they have stopped the plane in an aborted takeoff using just the battery. And when I sat in the cockpit (oh yes) I was shown the glass screen that hangs in front of the window with the same digital readings as is shown down on the monitors. This has been used in military for a long time, but is a first on commercial airlines and makes for a much easier job with the landing as pilots don’t have to be constantly bobbing their heads from the instruments to the runway.

So why is it taking so long??

Well, they have 820 planes ordered (compared to 100 at this time in the roll out of the 777). I’m assured they’re working full steam ahead, but a plane takes a while to build.

But we’re really gagging to see is how Air NZ will configure their new girl. Bring on 2014!

By the way, if you want to read my review of Air New Zealand’s Business Class on the 777, click here >>>

She’s arrived! I flew down from Seattle on the delivery flight of the Dreamliner 787-9. See my photo blog here >>>