Would you like go to Mauritius, said the email addressed to me by Club Med one plain Monday morning as I was staring into my screen trying to find the will to be creative. Sure!, said I as quick as my fingers would fly across the keyboard while my mind went into overdrive.

Where is it? What is it like? What’s the weather? What will I pack? Images of beaches and yachts and endless buffets danced in my head while Wikipedia and weather websites danced on my screen. 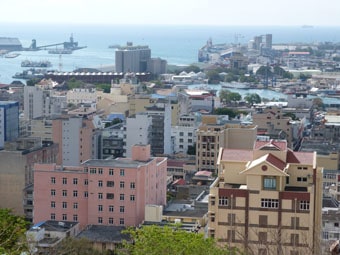 I had no idea either but Mauritius is a tiny volcanic dot of an island in the Indian Ocean about 850km east of Madagascar. Ok, that probably doesn’t help either. Madagascar is a bigger dot also in the Indian Ocean to the east of Mozambique, Malawi, Tanzania. Is that any better? If not and you really care that much, click here for a world map, then we can proceed.

It is surrounded by coral reefs (protecting it from tsunamis) and jagged peaks rise up out of the lush green that makes up the centre of this 2000 sq km island, home to 1.2 million people. It sounds big but the coastline is in fact only 177km around. It’s not hard to get around, but traffic jams are common – unhelped by the bus then truck break downs and a fire taking hold on the side of the road due to a cigarette butt, said our taxi driver as we made our way up the coast one morning. The airport is in the lower south east and in less than an hour we had driven across the island to Albion, in the north west, past fields of sugar cane and plowed ground for potatoes and onions, swerving around cyclists threading their way along the narrow roads with steep ditches on either side to cope with the rainy season. 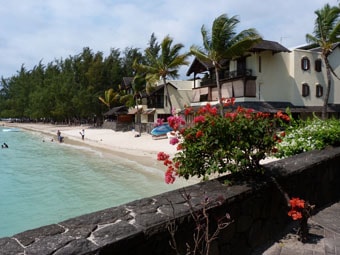 A little beach at Grand Bay

How do you get to Mauritius?

I’m glad you asked. From New Zealand, you fly to Melbourne or Sydney and take Air Mauritius direct. Bring a big book of sudokus and a couple of trashy novels because the flight is a cool 11.5 hours and the inflight entertainment is rather lacking. A few movies play on rotation, most in French and none that I’d heard of. Fortunately for us, the back of the plane was not very full so I was grateful for the 3 lime green seats to sprawl out on and the complimentary and colour coordinated eye mask and bed socks.

They use the Mauritian rupee, but like all travel to exotic places like this, I wait until I arrive to draw out my currency from an ATM either at the airport, in town or from the resort if there is one. But to be honest, from what I’ve seen of the shopping, there’s not a lot outside of the touristy souvenirs that’ll grab you, apart from summer dresses and if you’re a shoe addict you’ll slow down past a few windows. 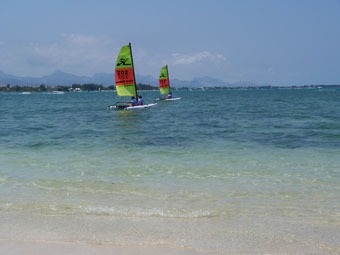 A typical day in Mauritius

The local Mauritian people speak French and Creole and English is also widely spoken. Indians have settled here, as well as Africans and with a tug-o-war history between Arabs, Portuguese, Dutch and French until the Brits captured it in 1810 and used it as a military base. The main tourist group (behind South Africans who can fly here in 3 hours) are the French. Although I might be biased as I’m staying at Club Med Albion Villas*, which is a French resort. (More about that in the next post). Mauritius became independent from the UK in 1968.

Mauritius’ main claim to fame as far I am concerned is it was home to the flightless dodo – made extinct when the Dutch polished the last one off in the 17th century. So I now have a little wooden dodo in my possession. 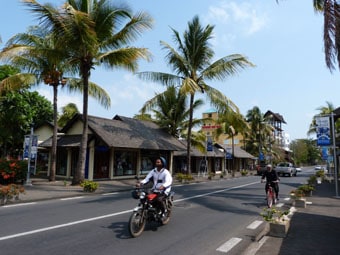 The shops at Grand Bay

Power points are the 2-prong round ones that are used in Asia. (Wiki says 3-prong UK plugs, but I have not seen that kind of socket. However, disclaimer: I have not visited every property in Mauritius). There is a winter and summer, or rainy and dry season. It’s typically hot and dry from May to November and humid and rainy from November back around to May. They make their fortune out of sugar, tourism and textiles, but as with the rest of the world right now, it’s tough out there and sugar prices have dropped considerably. Much of the future of Mauritius probably lies in tourism.

Read my review here of the Club Med Albion Villas >>>