Cue Otis Redding’s Sittin’ on the dock of the bay and some shrill whistling to pierce your ear drums, for I am ensconced in quite possibly the best room with a view in San Francisco.

I have a waterfront room at the stylish Hotel Vitale, quite literally looking at the dock of the bay. Although Otis wrote this after living on a house boat on the other side of the ‘Frisco Bay at Sausilito, my view is not too dissimilar. In fact, since Otis wrote that song in 1967, the view hasn’t changed that much.

Hotel Vitale on the corner facing the San Francisco Bay 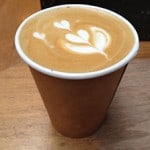 The Bay Bridge was built in 1936 (not to be confused with the Golden Gate Bridge which opened a year later) and crosses over pretty much between the Ferry Building marketplace in front of me (a fantastic place for breakfast and a perfect flat white from Blue Bottle Cafe) and AT&T Park where the Giants play.

And right now I am peeping at the new light show which is a visual masterpiece of moving white lights on the span of the bridge, programmed to run for 2 years after the sun sets and never repeat the same sequence. 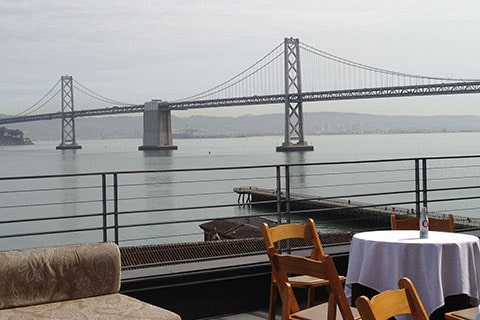 Hotel Vitale is part of the boutique Joie de Vivre collection of hotels, mostly in California with a few dotted in Chicago and two soon to be opened in Hawaii. They range from stylish and elegant like this one, to hip and trendy with graffiti walls and bold colours, to businesslike and arty, to music and edgy. Each one is unique. 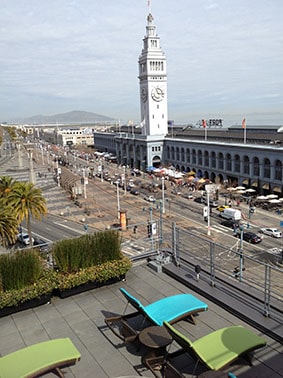 The Vitale is located on the waterfront at the Embarcadero, on the edge of the Financial district.

It’s an easy peasy ride on the F-line cable car straight up Mission Street to the huge Westfield Mall and surrounding retail stores, including those on Union Square. But it’s also easily accessible to the attractions and hoopla of Fisherman’s Wharf.

I walked the 2 km to Pier 39, past the America’s Cup team bases, to where the boats go to Alcatraz and the Aquarium is. Here it’s all about tourists eating seafood chowder in sour dough bowls and buying souvenirs.

The Vitale also has a day spa with a view and 2 hot tubs for a couples (or single) soak amongst the bamboo on the rooftop. 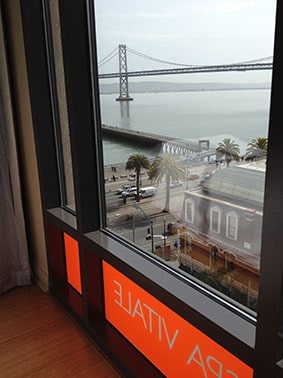 How relaxed would you be in this day spa…?

Americano is their acclaimed ground floor restaurant which spills out the front into a garden bar on a nice day.

As you might expect, with a name like Vitale, they specialise in Italian cuisine and pride themselves on enjoying the latest farm-to-table phase with the fresh markets selling produce direct from the source just across the road.

I’ve stayed here twice now, and love it. Oh and there’s free coffee in the lobby every morning for guests.