I’ve been known to skulk among the bushes outside the odd movie studio hoping to catch a glimpse of a celebrity. I’m not proud of it. The person with me even picked up tossed receipts lying on the ground in the hopes that it might just have the name of some A-lister who had just bought a sandwich. 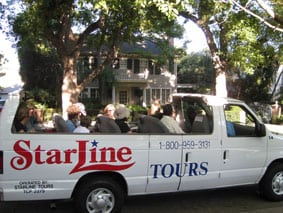 The Halloween House from the comfort of the stalking bus!

That was years ago when I was young and silly. These days I do my celebrity stalking in much more comfort.

The last time I went on a stalking mission we set off from Starline Tours kiosk on Hollywood Boulevard were I was driven in their open-top van around the Hollywood hills having homes of the rich and famous pointed out. Think gates, chimneys, garages… but all the while keeping eyes wide open lest our prey inadvertently walk outside.

And sometimes they do. David Spade has been known to give the middle finger salute to passing tour buses and Ellen De Generes stops and waves or to have a chat. Some celebs clearly know which side their bread is buttered. 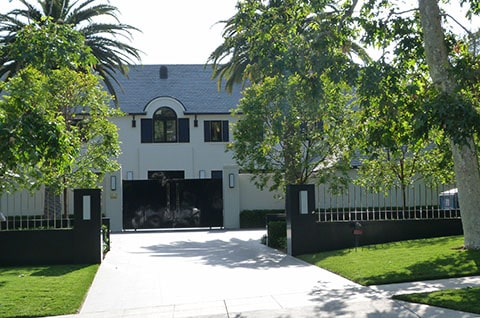 This year, Katy Perry’s place was the most requested.  Simon Cowell remained as number two, but Ellen Degeneres turned up as number three with her recent home move in July.   This summer she even spoofed one of the Starline tours on her TV show by clandestinely conducting a tour as if she was a Starline guide.

Tom Cruise dropped from number 3 to 4, although there was a flurry of excitement during the fast and furious divorce coverage. Christina Aguilera, with her new album and high ratings on “The Voice” made it back on the list, while Elvis Presley is also back in the spotlight, thanks to the 35th anniversary of his death pulling at heartstrings.  The Hillcrest home he once occupied is currently on the market for $12.9 million.

Who slipped from the list is often as interesting as who appeared.  Michael Jackson and Jennifer Aniston slid off the list, as did Dr. Phil and the Playboy Mansion.

Whose home would want to stake out?