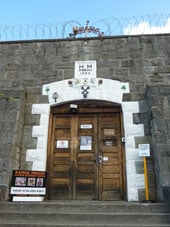 This scungey prison, built in 1858, closed only in 1993 after being deemed unfit and described as ‘comfortable but draconian’ back in the 1970s. These days it’s a quirky backpackers for those who like roughing it. It sits on one of the most beautiful spots in Napier, high up on Bluff Hill with the most amazing views that prisoners never got to see, thanks to the high walls topped with barbed wire. 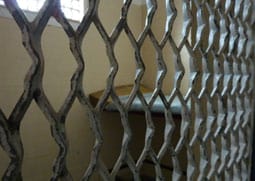 This cell is still as it was. It’s not where backpackers stay. Phew

We took a tour, the bloke and I, and being one of the Boys in Blue he was last here when this place was a working prison. Not a lot has changed. This time armed with only an audio guide, we followed the map on our own little tour starting at the huge wooden gate at the entrance with a sliding peep hole.

It’s like a castle. All you need is the moat and you’d step back into the annals of history. Huge stone walls retain Bluff Hill and enclose the courtyard where three hangings took place here under the satisfied gaze of locals who apparently paid to watch. Here’s the list of all New Zealand hangings if you’re that macabre! 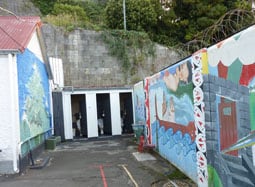 This is where free time occurred. And ablutions.

The death penalty wasn’t actually abolished in New Zealand until 1989, but the last person to be executed by hanging was one Walter James Bolton in 1957, convicted of poisoning his wife. (For curious readers like myself: he had apparently been having an affair with his wife’s sister and his wife had been ill for a long time then died. Turns out he was slowly killing her with arsenic. Mind you, his defence proved that arsenic was found in the water supply on the couple’s family farm and traces were also found in his two daughters. He was hanged at Mt Eden Prison.)

We walked past the Pound where prisoners were kept in solitary confinement, down narrow corridors where sliding steel doors open into cells covered in graffiti. The bloke recognised names of local gang members who had displayed their bravado with marker pens. 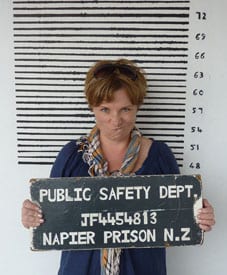 I don’t know how tall this chart makes me, but it ain’t correct!

We read histories of notorious crims and peeped into the former Mess Hall (now Backpacker lounge). Some of the cells, which were occupied so I didn’t snoop into them, are now backpacker accommodation with names over the doors like Penthouse and Conjugal Unit. But not being much of a backpackery type, me, I think I’ll leave these suites to the English tourists…

Jump here for Napier Prison’s website and details about the tours.