If you’re shooting up to Hawaii any time soon, then here’s a cool thing to do – go to a college football game. 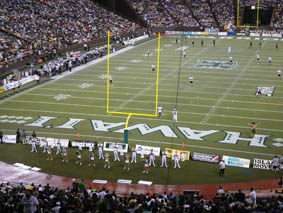 This is so typically American and a great (albeit long) night out – complete with hotdogs and chips!

College football is HUGE in America. Take a taxi from Waikiki (it’s quite a way though!) and head out to the 50,000-seat Aloha Stadium to see the Hawaiian Warriors play. Thousands of people arrive in the afternoon, parking in their designated season-ticket parking spaces, tressle tables, bbqs and chillybins laid out all having monstrous picnics. A marching band plays outside before the game starts. When I was there a clown was making balloon whatnots, face painters were painting and there was much hoopla. Inside the gates are the hotdog and burger stands, the beer outlets and a tent selling creole cuisine. Bizarrely.

The home team runs out through an inflatible football helmet dressed in dark green amid the cheerleading girls in crop tops and waistbands for skirts and boys in jumpsuits (what’s with that??) They jump and flick flack, wave their pom poms, leap into the air while the lads catch them and hold them by their feet. They lift up signs for us to cheer to or chant ‘D’ ‘fense’ when required. We kiwis tried to start a few Mexican waves and really if we’d shown more determination we would have, but eventually the big Hawaiian mascot guy wearing lots of leaves got the crowd going.

Four 15 min quarters takes about 3 hours to play and is an excellent  night out. Tickets $29. Experience: priceless.