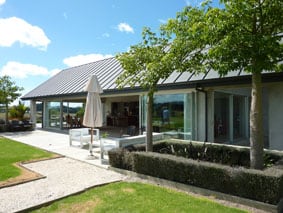 We’re at the end of our swanky five-day tour of a teeny part of Northland and I’ve had a brilliant time exploring the nooks and crannies of this part of the country and acting like a posh tourist.

And I am doing it posh. First two nights at Waipoua Lodge, last night at Bay of Islands Lodge in Paihia and today we are heading back to Auckland via two nights at Takatu Lodge and Vineyard, just out of Matakana. 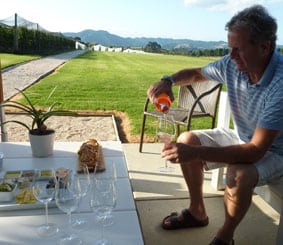 John pours us a drop of his sought after Rose

Owners John and Heather Forsman originally bought this rolling piece of countryside to produce a Bordeaux-style wine – no additives and minimal intervention. They weren’t planning on the whole luxury lodge thing, but the land pretty much called for it. While John (an airline pilot in between tending to the vines) was busy studying everything needed to make the perfect drop, Heather was researching design and architects. They eventually found Steve McCracken who has helped them build one of the most beautiful, modern and minimalist lodges I’ve seen. 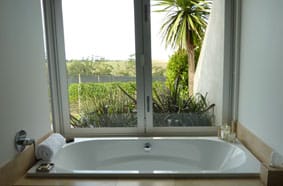 Our room with a view

Disclaimer: I confess to loving this style of building anyway. But how can you not want to build your dream home just like this?! Open fire in the huge living room with ceilings as high as the moon. Ten-metre wide French doors that spill onto a patio and the vineyard at the end of the front lawn, and the kitchen fully involved in the middle of the hospitality.

It’s deceptive though when you arrive. We pulled into the stone courtyard where two guest suites flank both sides of the front door and to be honest, it’s lovely but doesn’t prepare you for what it’s hiding. Open the huge wooden door and the wide hallway stretches out like an infinity pool dropping into the view of the vineyard and hills beyond. Okay, I’m raving here, but it’s flippin’ cool! 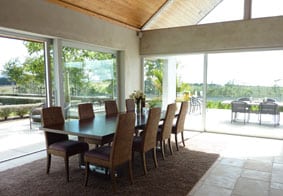 Breakfast is served in here

John and his cohort, winemaker Herb Friedli (who also makes wine for Waiheke vineyards Te Whau, Kennedy Point and Poderi Crisci) are more about taste than quantity. In fact John confessed to not being able to look when the workers prune most of the grapes off to allow the sun to ripen only the best ones.

But the result is award-winning wine that Peter Gordon, for one, has snapped up for his London restaurant Providore. They have 9000 vines of red, 5000 of pinot gris and their dry rose is deliciously non-sweet. Of course, as guests, we got to sit in the late afternoon sun with an antipasto platter and taste them, along with a posh couple from England who were on their grand New Zealand adventure. 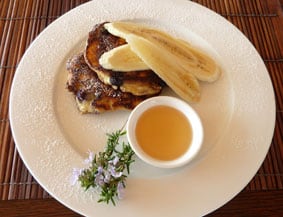 Pancakes for me please!

But this isn’t such a posh lodge that you can’t wear Hawaiian boardies and bare feet to breakfast (as the aforementioned English gentleman did). It’s homely and Heather and John are genuinely interested in their guests.

The rooms each have enormous bathtubs under French windows with views of the vineyard, a CD player (with a selection of great discs that we loved so much we went away and bought one), a super-king bed with 500-thread count linen and fresh coffee to make our own brew.

That night we took Heather’s recommendation and dined in Matakana at Tapiano Bar and Bistro, or we could have poodled along to Leigh to Sawmill Café the other way. But we’ll save that for next time.