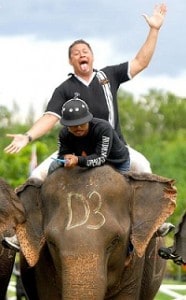 What does an ex All Black do with his days? Why he competes in elephant polo of course!

I’ve blogged about this before but thanks to a report from eGlobal Travel Media we can see just how our burly kiwi lads fared in this year’s tourny.

Each year in the royal Thai seaside town of Hua Hin (my favourite place for a romantic holiday in Thailand by the way, read my hotel recommendations here >>>) a charity polo match is held – on elephants. Players come from all over the world to compete in the Kings Cup and this year a few ex All Blacks took on Tiffany’s, a team of Thai ladyboys. There are 3 elephants per team and the game is played in two 7-minute chukkas.

The team photo alone would have been hilarious, let alone watch them all lumbering around the field, mallets waving with much shouting.

Thailand’s ladyboys are world-renowned, says Peter Needham of eGlobal Travelk Media. Tiffany’s Show (which sponsors the team named after it) is a famous transvestite cabaret in Pattaya.

These gorgeous ladyboys took on the All Blacks. Pic Peter Needham

The All Blacks were Olo Brown, Robin Brooke and Charles Riechelmann who put on their black jerseys, complete with silver ferns for the duel.

The final score was 3-2 to the All Blacks.

Since these tournaments began in 2001, over $500,000 has been raised to help with the welfare, rescue and health of Thai elephants.