It’s my 6th visit to the Crescent City and I always like to do a couple of the famous activities each time like my usual places for yummy food and great music. But this time I went on a cocktail tour of New Orleans…

Did you know the word cocktail was invented here? Butchered here, is really what happened. We all know that New Orleans was settled by the French and you’ll see the influences in everything from architecture to cuisine.

So, back in the day, the shot glass used to be shaped more rounded like an egg cup. In French an egg cup is “coquetier”. Thus a shot of gin or rum or whiskey with a mixer from the pharmacist barman (I’m not joking) went from coquetier to cocktay, as the Americans pronounced it, then cocktail. Voila!

Considered by many to the be original cocktail. This whiskey cocktail was invented in New Orleans at the now Roosevelt on Royal Street when French apothecary (chemist) Antoine Peychaud mixed brandy, absinthe and bitters. The brandy was originally Sazerac de Forges et fils from France. But during the Prohibition it, and everything else, was nigh impossible to find. When Prohibition ended, French brandy was frightfully expensive so the Americans made it with rye whiskey. Absinthe was later banned and replaced with Pernod. A Sazerac is always served without ice. I hated it! 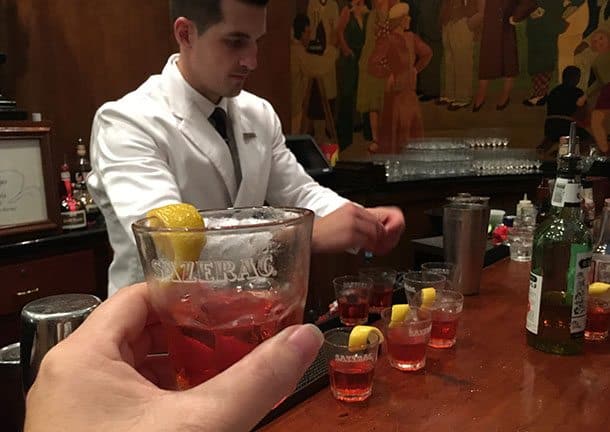 My Sazerac at Roosevelt

Prepared for the arrival of the French emperor in 1787 who never came due to the inconvenience of dying. The plan was to rescue him from the Isle of St Helena where he was convalescing and let him spend his days in New Orleans. The signature drink here is the deliciously moreish Pimm’s Cup, created in London. Nip upstairs and have a look at the the original decor and read about the family who lived here.

It is true that real Jack Sparrow pirates once walked the streets of New Orleans, trading their plunder and drinking up large! Whether they “arrrr’d” or not, I can’t be sure, but I can say that this absinthe bar on Pirates Alley, behind the church on Jackson Square, is keeping the legacy alive.

Absinthe is also known as the green fairy after the effect dripping cold water slowly through a sugar cube has on the green liquor, entered the US through New Orleans from France. It was said the wormwood made people hallucinate and go mad, and this was later found to be more due to the quantity of alcohol consumption that to the ingredient, which was banned then reinstated only in 2007. It’s a licorice drink which is so not me, but watching the water drip over the sugar into the glass is fun! Add absinthe to gin and you have the Obituary Cocktail. Add it to vodka and it’s the Russian Funeral. Add it to a flute of champagne and it’s Death in the Afternoon. Very piratey! 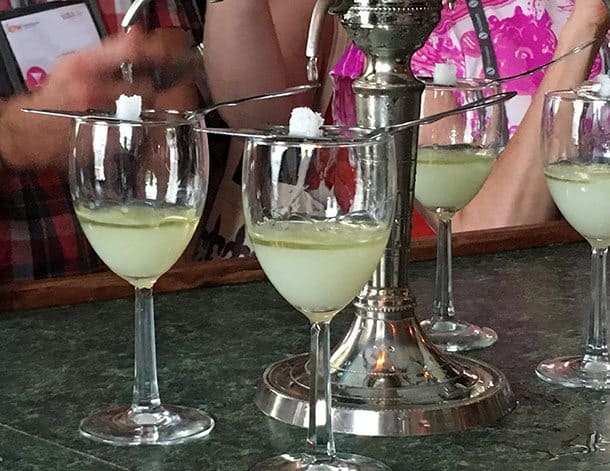 Proudly standing on the corner of Jackson Square beside the church and often serenaded by street musicians just outside, Muriel’s was rebuilt after the great fire of 1788 that almost destroyed the city and has been here ever since. Their signature martini was created by Mary P. Hulse, head bartender and here’s the recipe

Home to the famous Hurricane cocktail, Pat O’Brien’s has three bars, right next door to Preservation Hall and is well worth popping into. It has two entrances, but if you step in on S Peter Street you’ll find a stand up bar on your left and a dueling piano bar on the right. Walk through to the outdoor patio and another bar awaits where guests sit at small tables under umbrellas, then there are private function rooms upstairs if you want to throw a little party!

The original owners operated Club Tipperary nearby during the Prohibition where the password to get in was “storm’s brewing”. The signature drink was the hurricane. But as whisky was hard to come by and rum pouring in from the Caribbean, this drink is still made today with rum and fresh fruit juice with plenty of ice. 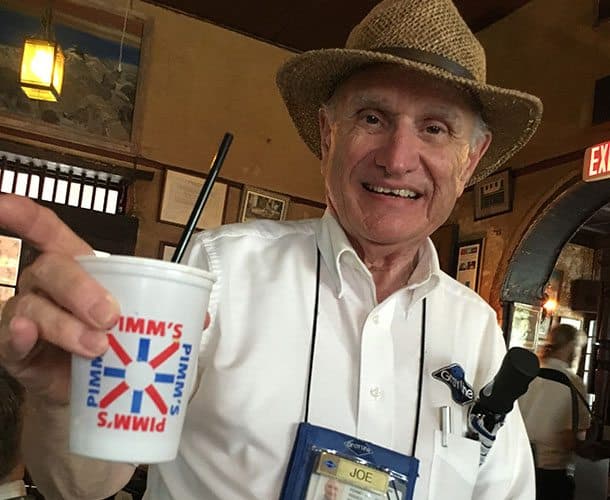 Thank you for all the trip blogs. Very informative and helpful. Making it easier to plan, road trip from SA, Tx to Milwaukee. Thank you, AMC.

That's great Anna, thanks for taking the time to comment - Megan