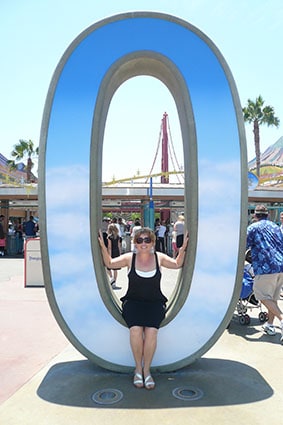 Disneyland’s little sister California Adventure has come a long way since she first opened in 2001.

If you haven’t been for at least a year then you’ll notice some massive changes, and you should since US$1.1billion was thrown at it!

Firstly the letters out the front are gone 🙁 I know, we all had a photo sitting on a letter.

Instead you step back in time to California in the 1920s, just like it was when Walt Disney arrived in the state with only one set of clothes in his cardboard suitcase and $40 in his pocket.

Buena Vista Street has a bright red trolly bus that gives weary punters a ride past the Carthay Circle Theater where Walt’s first animated movie played, and to the hub from which you need to decide which direction to conquer first. 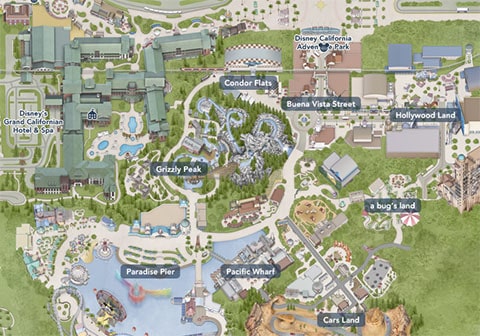 See how integrated the Grand California Hotel is into the park on the left? Spendy but well worth it!

Heading straight to Carsland which opened in 2012, grab a FastPass for Radiator Springs Racers and dash on to Toy Story Mania over at Paradise Pier because they don’t do Fast Passes here. 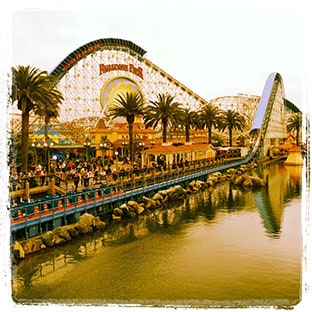 A little Instagram on a cloudy day does wonders. This is the Paradise Pier roller coaster

Toy Story Mania is 4D ride that is less of a ride and more of a competition between you and your co-driver. Wearing 3D glasses you’ll be shuffled around and along to stop in front of moving images that you must shoot at with your laser gun. Things like balloons with scores on them, plates chugging along the screen like an old fashioned country fair. Things go pop and air will rush at you as the points add up on your dashboard. It’s great fun, but with no Fast Pass, do this ride early lest you wait for an hour in line.

While you’re there, if you like whizzy roller coasters with upside down and inside out spins then go on California Screamin. They have the Fast Pass, so maybe get that before you line up for Toy Story and hopefully you can time it so you don’t have to return later in the day.

World of Colour opened in the lagoon at Paradise Pier as a water and light show set to big Disney music and clips from its most famous animated movies. It’s only 25 minutes long and if you get a Fast Pass you can get priority viewing, but it’s standing room only so if you’re 5’2″ like me you’ll just have to tip toe and peep – or get down to the pier early and line up in front of the fence. It’s quite spectacular as the water jets that shoot up several stories become the screen on which images are projected.

Soarin’ over California is one of my most favourite rides in California Adventure. It’s a tame seat in an IMAX theatre that lifts you up and you feel like you are flying over the State of California even though you’re not moving all. You’ll also notice the smell of oranges as they pass over Orange County, dipping low to the ocean, soaring over mountains and across golf courses. It’s cool and yes they have Fast Passes. 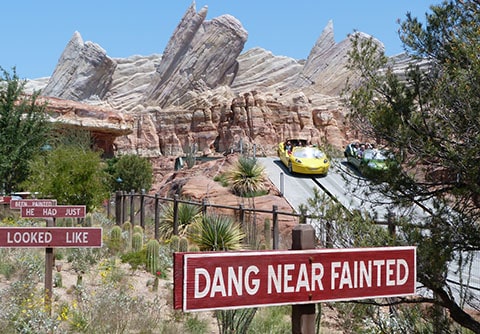 Cars Land is the hero of the park. It opened 3 new rides in 2012 themed on the Pixar movie Cars. Radiator Springs Racers features you whizzing around the track seeing Mater and Lightening McQueen and then heading into a pit stop to get ready to race against another car. It’s random as to which wins, so is always exciting. They have Fast Passes, so get one at the beginning of the day, or if you don’t mind going in a different car to your friends, line up in the Single Rider line for quicker access. 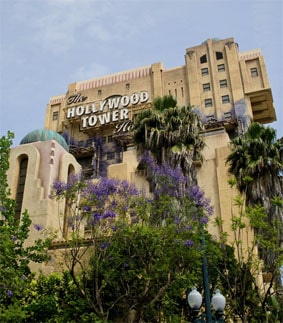 Twilight Zone Tower of Terror is freaky and not for the queasy of stomach. It’s as much a freak out with the anticipation of what you’re about to experience than the actual drop leaving your heart and your glasses at the top of the building like a cartoon. It’s one of the most popular rides in the park and lines can be 2 hours easily. Fast Passes are also usually gone by mid morning, so good luck.

Grizzly River Run is a white water ride where you all pile into a round bumper boat and are spun along, dragged up and then come crashing down. Great on a hot day. Not so much when it’s chilly.

For little ones Turtle Talk with Crush is a cute interactive chat with the famous animated turtle from Nemo who seems to be able to see you from the screen. The kid will love this.

Little Mermaid with Ariel is new and for little princesses you’ll have to do it. You sit in a clam shell car and are driven slowly around the scene of Ariel and her friends and while there is a big fat witch, it all works out with a love song in the end.

Hollywood Land is worth visiting before you leave. They show you some clever tricks with painted scenery and how animations are done along with a few more rides like Monsters Inc and a 3D Muppet Show, plus characters wandering about – like The Incredibles and Frozone. 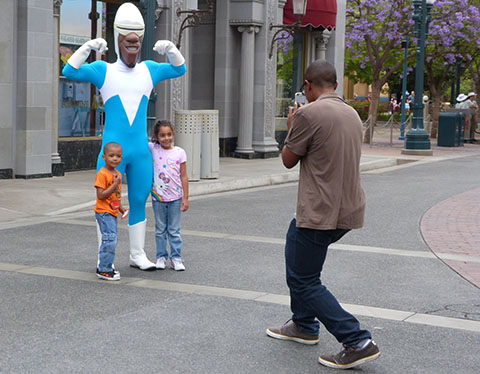 Tip: a lot of the daily crush comes from locals with season passes, so if the weather is little gloomy when you’re there, count your blessings. That’ll mean most of them will stay away and couple that with an early morning start and you’ll be through those lines in no time.