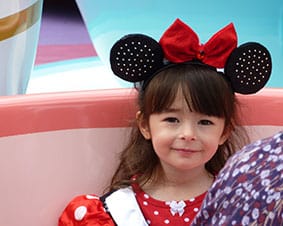 I love this little girl riding in the teacups!

I’ve been five times in the last four years and a few times before that.

This massive park in Anaheim is in fact two parks. California Adventure is across the courtyard and that’s an entirely separate entity which has had huge investment in recent years. (More about that below)

Where to stay at Disneyland:

If you stay in one of the three Disney hotels you get to go into the park an hour before the hoi polloi.

Staying in a Disney Hotel not only is the closest, but it means you can do a 7am start with your sensible shoes on and blitz the park for an hour before the rest of the public are allowed in, but believe me, it’ll be worth it. Yes I set my alarm for 6.20am (on holiday!) and we were through the gates and whizzing on rides before most people were putting on the coffee.

My headboard at the Paradise Pier. Yes you can turn the fireworks off

I have stayed at all three Disney hotels and if you have the budget my top pick would be the Grand Californian Hotel. The entrance to California Adventure is literally from the back door. The other two: Paradise Pier Hotel and Disneyland Hotel are about a 10-minute stroll through the shops and restaurants of Downtown Disney, but you can get the monorail if your feet are over it.

Now to the park… 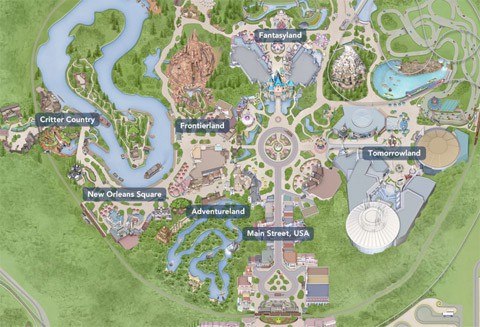 Disneyland is so huge, one needs a strategy

This is the order we hit the rides to minimise our waiting time. Bear in mind we were staying in a Disney hotel so part of the park was open at 7am, but not all of it.

Plan A was to rush up Main Street USA and hang a left into Adventureland. But no. Adventureland was closed until 8am and so was Tomorrowland on the right, so we spent the first hour blitzing the kiddie rides in Fantasyland. 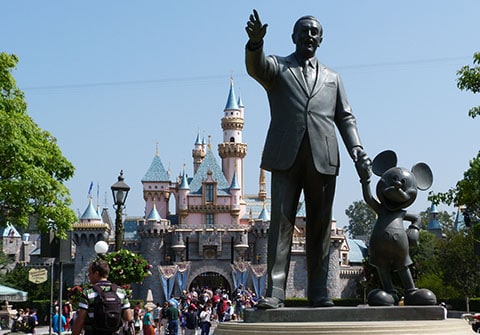 This is still pretty much as original as Walt imagined when he opened his theme park in 1955. Walking through the Castle that Tinkerbell flies over during the fireworks each night, you arrive in a street lined with castle-ish buildings housing gentle rides. Perfect for your younger Disney fans. 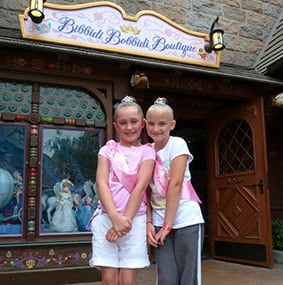 These two have just finished having their hair done

Peter Pan is still so popular that we decided the 45 minute wait wasn’t worth it. However, it’s a cute little ride “flying” over London with Peter and Wendy and the lost boys.

If you have a precocious daughter then she will beg you to spend $50+ on having her hair pulled up into a bun and make up on to match her $50++ princess dress at Bibbity Bobbity Boutique. You’ve been warned!

We did the Pinocchio ride and it’s here you can line up for It’s a Small World. But in all honesty, we just kicked around here as we had no littlies so lined up at the rope of Adventureland by 7.45am.

The spinning Tea Cups are also here which are fun no matter what your age! 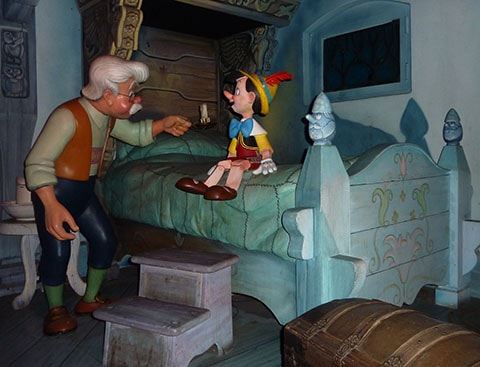 Gepetto and Pinocchio have a chat as you glide past

This is where you should make a bee-line for the Indiana Jones ride.

If there’s a queue grab a Fast Pass and return at the designated time. If not, go straight in, walking about 10 minutes at a good clip to your army truck where you will strap in 4-across and hold on. It’s not a roller coaster as such, but it is rocky with lots of stop/starts and twists and turns. Don’t take little ones frightened of snakes, creepie crawlies or skulls. 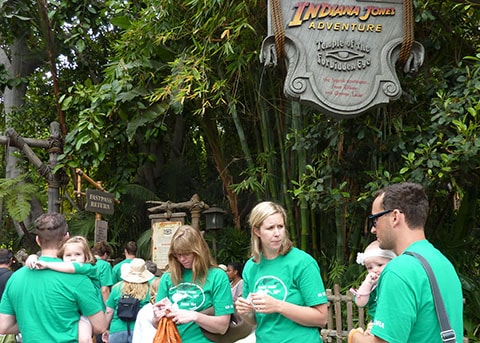 You’ll see groups in matching T-shirts so they don’t lose each other!

Next to go the Pirates of the Caribbean which is a gentle boat ride in relative darkness through a jolly scene of drunken pirates, bombings, treasure and more skeletons. Look for the Johnny Depps hiding in barrels and other sneaky places. You will come splashing down a slide but no one gets wet. Ish.

Haunted House should be next. It’s just beyond New Orleans Square which has a couple of restaurants serving deep fried goodness-knows-whats. The Haunted House is not a roller coaster either but it’s all about ghosts and spirits and holograms, so don’t take this ride if you’re easily spooked. At Christmas and Halloween the props are all dressed up in appropriately themed attire.

Following the path around, the next ride you’ll come to is Splash Mountain. You can tell how tame (or not) a roller coaster is by the harnessing you need to wear. This comes with none, however there is a steep watery splash at the end and the person in front (me) gets soaked. This is a cutesy ride through the old stories of Brer Rabbit, Brer Fox et al and some tar baby southern slavery with sing-along ditties.

But for little ones (or their grandmothers) Winnie the Pooh is next and is a safe and sweet little interlude while you dry out.

Now if you really want to, take the Mark Twain paddle steamer around the lake to the island. Personally this is too boring for me. My advice is to high tail it to Tomorrowland. 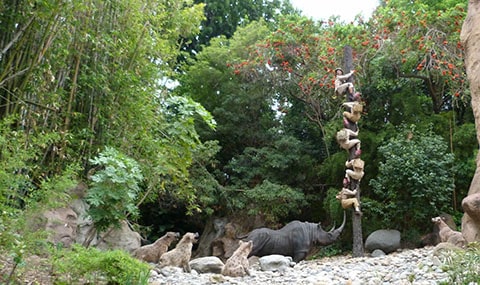 A rhino gets his own back on the Jungle Cruise

But before you leave, pop into the Jungle Cruise. This is a gentle boat ride which is fun purely for the dry humour of the skippers. It’ll go over most kids’ heads, but the adults will enjoy the mockery.

Either start your day here or at Adventureland as both have the park’s most popular rides (Indiana Jones and Space Mountain).

Space Mountain is a roller coaster in the dark. It was revamped in the last few years with new cars and more seamless ride. It’s freaky and gives you a great opportunity to scream your lungs out. Lines are long so grab a Fast Pass and return later.

Star Tours is a 3D simulator ride through some Star Wars scene. It’s fun and worth doing if the lines aren’t too long.

This is a whole new “land” currently under construction, since Disney bought the Star Wars brand. It will sprawl over 14 acres, but no word yet on when it’ll open. (They broke ground April 2016)

Here’s a tip: don’t start your day pass if you arrive late to Anaheim, instead hang out for free in Downtown Disney, eat at the great restaurants, shop, watch sport at the ESPN bar and if you’re in the right place you can even see the nightly fireworks – all for free! Here’s my blog post on Hanging out in Downtown Disney>>

Hello, in your April 26, 2015 Blog Post "Best Rides at Disneyland" you show a Disneyland Anaheim map... what was the source of this image? Do you have a larger file of this Map? I'm in the planning stages of building a model of Disneyland (Anaheim) as it was in 1993 (right after Splash Mt opened, this was my favorite configuration of the original classic Disneyland) and this map is one of the best ones I've come across so far: it's a straight down perspective and pretty much deletes everything outside the Berm which is how I want to do my model. Thank you for any info!