The last time I was in Macau was about eight years ago. A lot has changed in eight years, so here are eight reasons why I would put Macau on my stopover Bucket List.

I’ve just had a whirlwind three days/four nights to cram in as much as possible and let you know all about it. 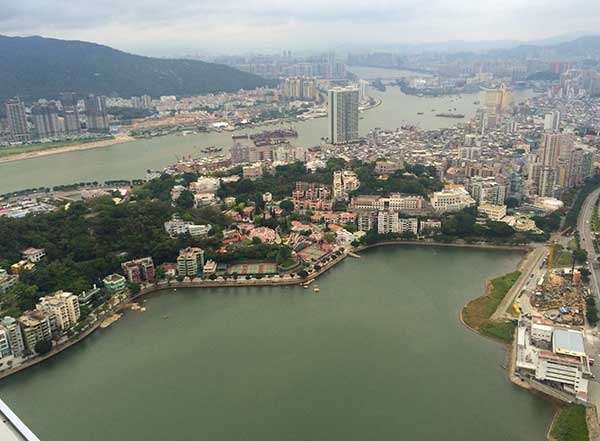 Macau is a tiny 30 sq km peninsula, located a one-hour ferry ride from Hong Kong. Soon they will be linked by a 30km bridge, which is nearly finished, and which will allow even easier access for day trippers from Hong Kong. There is a ferry directly from Hong Kong International Airport too (you collect your luggage and clear customs in Macau) and one from Kowloon.

Once a Portuguese colony (traders first settled here in the 1550’s), it was returned to China in 1999 and while it is now its own territory (like Hong Kong) it is part of China, but the good news is that you don’t need a Visa to visit.

What shall we do in Macau?

Macau is an easy day trip from Hong Kong. The quick ferry ride drops you a Taipa Island (where the huge resort hotels are) or Macau (the historical and cultural heart). But I was told more than once that when those day-trippers get here, they realise how much there is to do and see and taste that they wish they had longer.

So here’s why I reckon you should have your next stopover in Macau instead of Hong Kong:

1. Ferry directly from Hong Kong International Airport. Just hop off the plane and follow the signs for the Sky Train to the ferries. You give them your luggage tag and they’ll miraculously find it and have it loaded on the ferry. When I got on I walked to the front where the blokes were loading but I couldn’t see mine. ‘How do I know mine is there?” I asked. “You trust,” said the man who understood my question. And I did. And they were right. 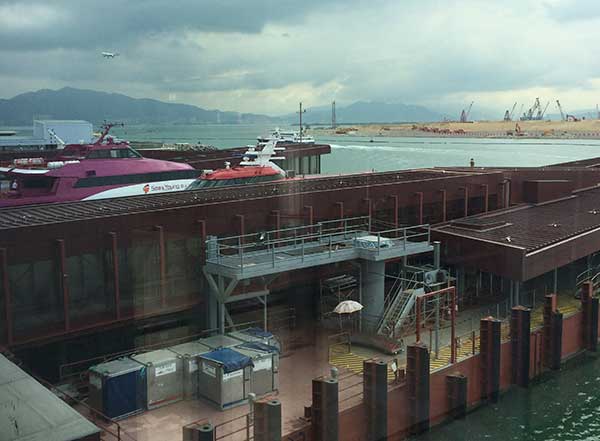 2. Macau was once Portuguese so you see the European influence everywhere from architecture to cuisine. Shopping in the streets around Senado Square is a highlight with the stunning cobblestones snaking busy shoppers along the streets. 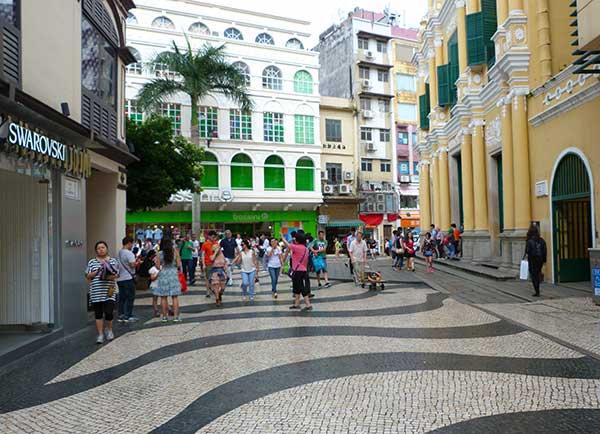 The cobblestoned streets around Senado Square

3. UNESCO World Heritage sites include the facade of St Paul’s just below the Macau Museum, which is also worth visiting for a glimpse of life here when firecracker factories employed hundreds and cricket fighting was for big money gamblers. 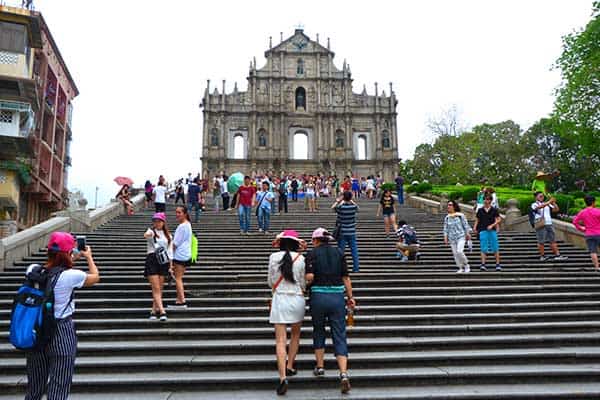 4. The food was one of the highlights for me. I had dinner at the tiniest Portuguese restaurant in Macau called O’Manuel Cozinha Portuguesa on Taipa Island where he sources ingredients from Portugal and local producers. The 24-month aged proscuitto and salted cod were my faves.

I had a fabulous meal at a Chinese meal on Coloane Island at Nga Tim in front of St Francis Church sitting under awnings near the beach. Order the “drunken sauna shrimp” (details coming in the next post!).

The unique combo of both cultures, traditional Macanese food, was great at Litoral on Taipa where I really loved the Minchi (mince and potato croutons with a fried egg on top).

But the fanciest of all was lunch at three-Michelin star restaurant Robuchon at the top of Grand Lisboa in Macau. 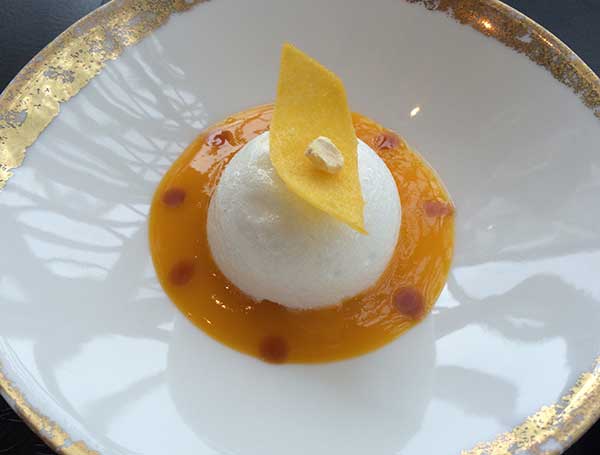 One of the many desserts from the trolley at Robuchon

5. The House of Dancing Water show at City of Dreams resort is created by Cirque du Soliel’s Franco Dragone, it’s an incredible spectacle of dancers and gymnasts diving into water which suddenly becomes a stage. There is lighting and music and it’s a great show for the whole family – including motorbike stunts. How his brain works to create all this is the biggest mystery of all! 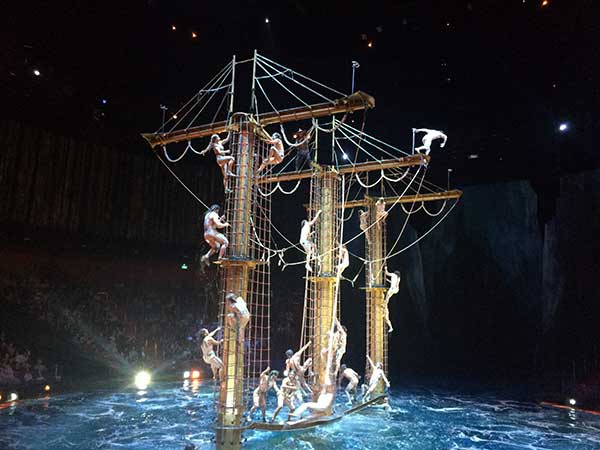 The ship sinks from stage into pool at City of Dreams

6. The fountains every quarter hour outside Wynn Hotel is like the Bellagio in Las Vegas with water dancing to the Chinese and English songs accompanied by gasps and camera flashes of visitors. Stop here on your way to the Grand Lisboa. 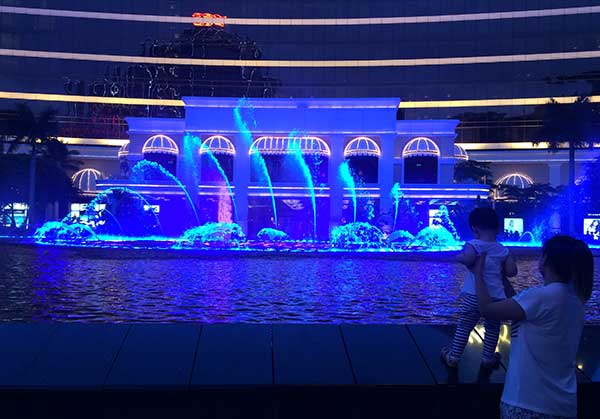 7. Stay at the fabulous Banyan Tree Hotel, part of the Galaxy resort of three hotels with a shared wave pool and beach, and a quiet adult’s pool surrounded by cabanas and pool attendants bringing drinks. The pic below is my standard-entry room with its own soaking pool! Here’s a tip: stay between Monday and Thursday for the best prices (around NZ$400). 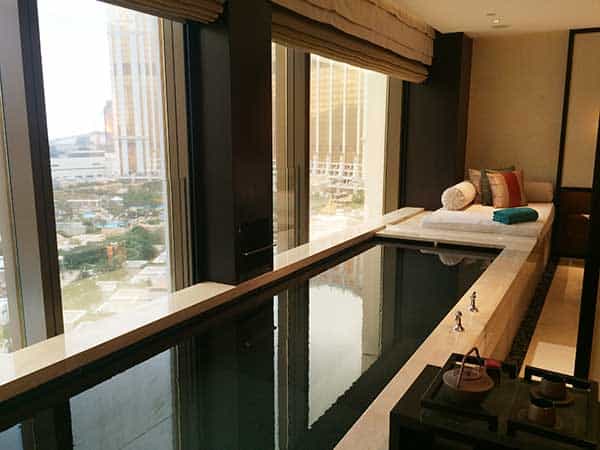 My private pool in my room at the Banyan Tree

8. If you’re daring enough try the highest bungy jump in the world plunge from the Macau Tower, or if you’re more like me, just do the Sky Walk around the rim, 233m above the streets below. It’s still the highest sky walk in the world though – and you’ll get a certificate to show for it. One of the busiest attractions in Macau, this is what people travel from Hong Kong just to do! 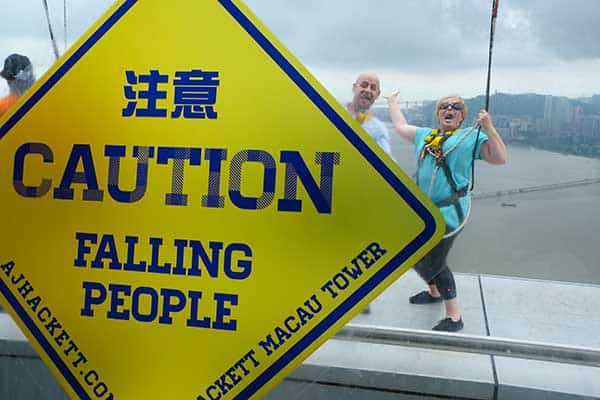 For more info on Macau, click here for Macau Tourism>>