It’s my third visit to Vanuatu in two years and a lot has changed since I was here 18 months ago! 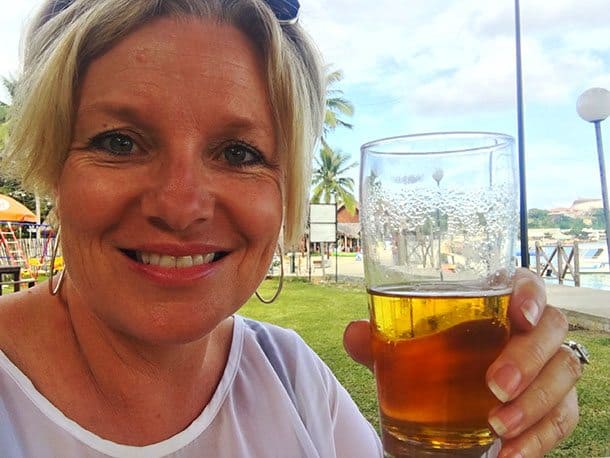 Cheers! Sitting at Rossi, a waterfront garden bar and restaurant, with a local Tusker beer

Those who know about our little backyard neighbour in the South Pacific, three hours flight from Auckland and two and half hours from Brisbane and Sydney, will remember that in March 2015 category 5 Cyclone Pam tore through the islands leaving a path of shambles in her wake. Villages were badly damaged, roads pot holed, trees down, power out and the clean up involved endless fires smouldering the debris into hazy skies.

Today, July 2017, Vanuatu is back and even better than before. In the words of the Six Million Dollar Man (only readers of a certain era will get this reference) “We can rebuild him. We have the technology. We can make him better than he was. Better, stronger, faster.”

The silver lining after the devastating storm was the injection of aid money from the New Zealand and Australian governments for infrastructure, and the World Bank to repair the airport runway. That meant that a whole bunch of projects were put out for tender and as we speak the finishing touches are being put on the brand new Port Vila waterfront beautification project. 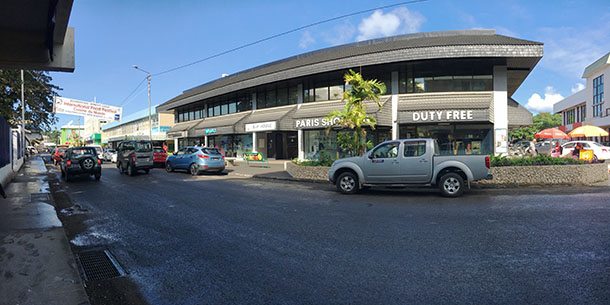 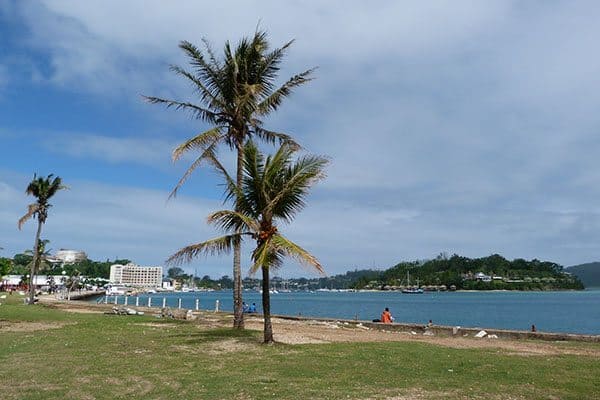 Part of the new waterfront in Port Vila

Concrete pathways leading from outside Nambawan Cafe (say that out loud) and the new women’s market that is about to open its doors in the next couple of weeks surrounded by new gardens and lawn and bursting with colourful sarongs and dresses. Huge concrete steps serve as seats and lead down to the water as you wander all the way into town.

On Wednesdays and Saturdays you can grab a table at Nambawan Cafe (owned by Aussie Ivan) for a free outdoor movie set up on the boardwalk, order pizzas and beers and watch the day turn to night and the lights of town compete with the twinkling stars.

Previously Port Vila was built with its back to the sea, but now, this new development has created a fabulous space for strolling and scooting. Cafes and water sports rentals, water taxis and heli rides, and the huge open-air building that will be the colourful new market.

Further along towards the beach side Banyan Tree Bar (definitely worth a cocktail in the sand here) and Chantilly’s hotel and restaurant, the waterfront changes to white pebbles and lush tropical planting with monstrous boulders tapering into the sea.

Since I wrote my post on some places to stay in Vanuatu last year, three more hotels are worth adding to my list in Port Vila: Ramada Resort, Holiday Inn and Iririki… 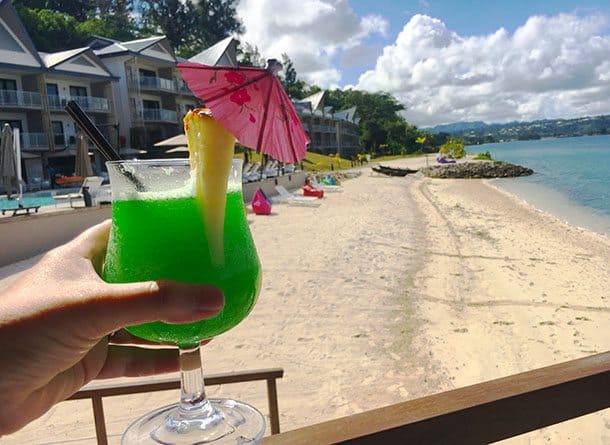 Because nothing says holiday like a drink with an umbrella in! (This is the new Ramada Resort) 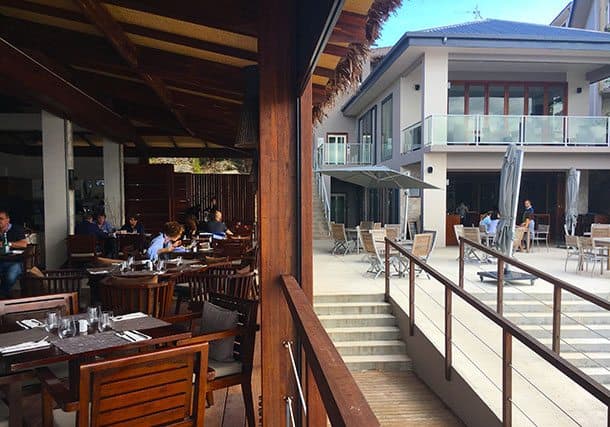 Beachfront restaurant and pool at Ramada 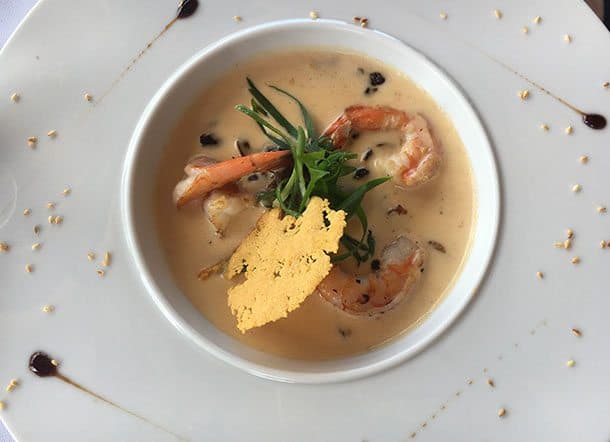 How bout this little prawn starter at Ramada?

Ramada Resort is the brand new property on a teeny piece of white sand beach with a pool and restaurant down at sea level. The rooms are built down the hillside giving each one a sea view and across the lagoon is lush forest. The chefs are French and Japanese and the food was out of this world delicious with a combination of both skills and flavours.

Don’t hate me, but I ate the foie gras which was guiltily delicious, followed by a piece of poulet fish which is a fleshy, meaty fish served with crispy skin and tasty Japanese flavours and seaweed. Hubby had a piece of superb Santo beef, which I had elsewhere in Vanuatu. Without an ounce of exaggeration, these steaks are so tender and all that is due to the lifestyle of the cattle raised and farmed here in huge fenceless paddocks under coconut trees, never tagged or rounded up by dogs (until their fateful day…) Consequently they are unstressed and juicy! Desserts are plates to behold too – if you have room. 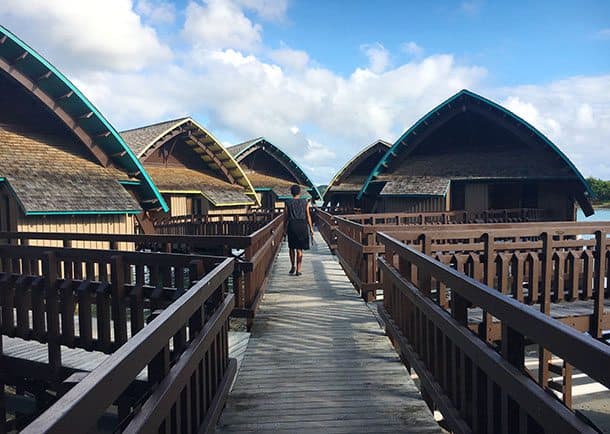 Overwater bungalows at Holiday Inn on the lagoon 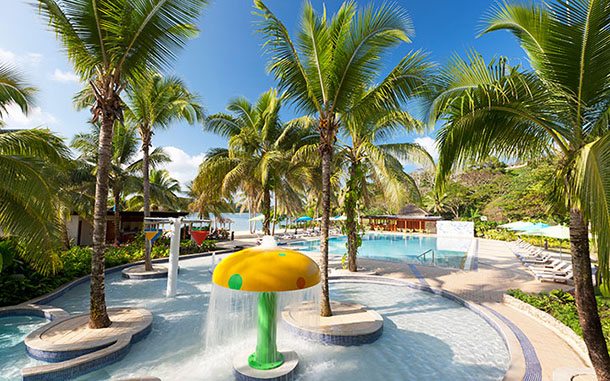 The kids will be very happy here! (Holiday Inn)

Holiday Inn has reopened after more than a year being closed for a full repair and refurbishment. It’s a few minutes from town on a lagoon where can stay in the hotel or in overwater bungalows which have steps down into the sea for you to snorkel and swim. Back on the hotel side you can pick up a kayak or catamaran for a blat on the water. There is a 9-hole golf course here and the hotel is really popular for weddings and corporate events. At any time there might be a party set up on the beach! This is a great family hotel too with two pools, including a water playground pool and a Kid’s Club, plus cultural activities on offer and a spa. 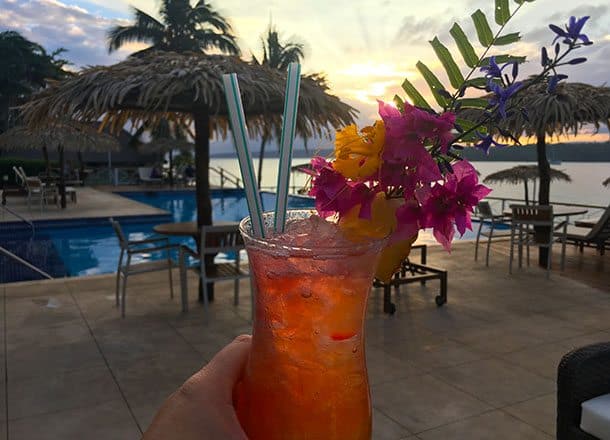 I caught the sunshine in my glass at Iririki Resort! 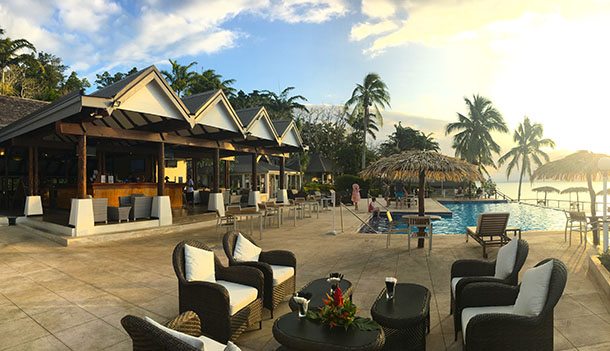 The new pool veranda on the hilltop at Iririki

Iririki Island Resort is another hotel that had been closed for a long time after the cyclone but opened in 2016 and is better than it was before! Located on its own island, just a five-minute water taxi ride from downtown Vila, the chalets are dotted among the coconut trees as you wind your way up the path to the restaurant and pool patio. This whole pool area is brand new after being completely destroyed and is simply superb for amazing sunsets through a cocktail glass. As with much of the dining on Vanuatu, the food is great and their seafood platter with lobster, crab and a whole fish is exceptional – and a cause of envy as it’s brought from the kitchen!

I decide to go to Vanuatu in August 2019 but I got no reply from several tour agencies on my enquiries. Am I booking the tours too early? I think August is a hot tourist season. Can anyone help me? I will stay in Efate island for 9 days and hopefully overnight staying in Tanna island.

Please come and visit our restaurant opened last May. Reefers Restaurant and Rum Bar is on the water, overlooking Fatumura bay is is rapidly becoming known as Port Vila best waterfront dining.

I'd love to! I actually was recommended it this time, but got a bit lost and went to one of your neighbours instead *blush!

We loved Hideaway Island and making new friends with Mele Village staff plus the amazing snorkelling and relaxing environment!

Thank you for promoting Vanuatu as a destination for a visit.

I HAPPY U LOVE MY COUNTRY