If you’re breezing through Berlin for a couple of days, no need to hire a car or clock up a huge taxi fare – do like the locals and see the city by tube, train and tram!

Guest blogger Helly Parsons is a kiwi expat living in Berlin and she’s learned a trick or two about getting around quickly and without spending a fortune to see the city’s top sights. (Her first post is on 6 great places to eat in Berlin)

Berlin’s super efficient public transport system (BVG), boasts flexible and reasonably priced tickets that deliver you straight to the steps of some of the city’s must-see locales. 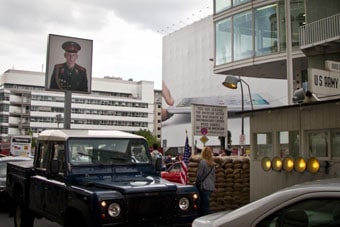 Commence your whirlwind tour by hopping on the nearest U-bahn (underground), and making your way to Checkpoint Charlie at Kochstraße (U6). This prime tourist spot was the single crossing point for foreigners and members of the Allied forces between East and West Berlin during the Cold War.

Take a photo in front of the reconstructed guardhouse with a man in uniform and read some of the courageous escapes stories. 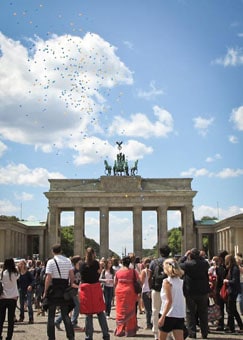 Jumping back on the U6, head north to Fredrichstraße – a main shopping drag that’s worth a wander.

Transfer onto one of the S-bahn trains to Brandenburger Tor, for a central point that gives you access to four of Berlin’s key (not to mention FREE) attractions. One of Berlin’s most well known landmarks, Brandenburg Gate is an 18th century city gate, that is a symbol of freedom and unity. 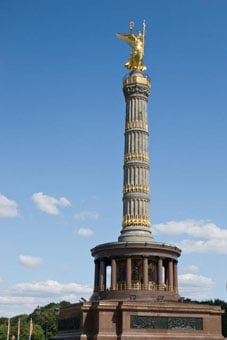 From here you can scan Germany’s second largest urban garden, Tiergarten known as Berlin’s green lung, and the Siegessaule (Victory Column) in the heart of the garden.

The mighty Reichstag stands on the edge of the park. Constructed in 1884, this parliament building has housed the seat of power since the days of the German Empire. The modern addition of a great glass dome and rooftop-viewing platform delivers a 360º city view. 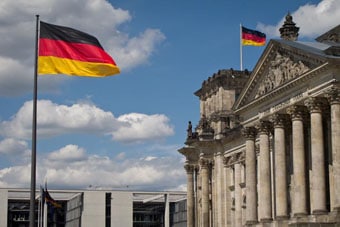 Entry to the Reichstag is free, however you do need to pre-register online.

An easy 2-minute walk leads you to the Holocaust Memorial. 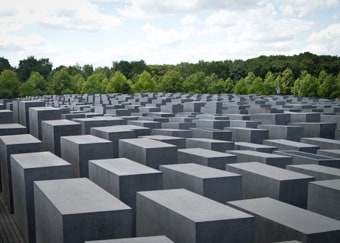 Composed of 2711 concrete columns over 19,000 square metres, this tribute is enormous in both size and significance. The information centre beneath the memorial contains the names and stories of all identified Jewish Holocaust victims.

To conclude the first day of Berlin by BVG, catch the U2 to Wittenbergplatz where you can stroll one of Berlin’s most famed avenues, Kurfuerstendamm. Located in upmarket Charlottenburg, Ku’damm is Berlin’s premium shopping street, and home of the largest department store in Europe, KaDeWe. 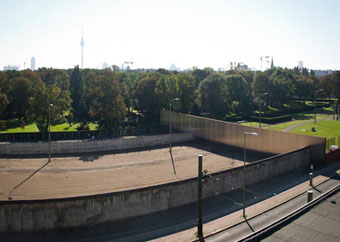 Journey north on the U2, hop off at Eberswalder Straße, and catch the M10 tram to Gedenkstaette Berliner Mauer (Berlin Wall Memorial). The memorial extends along a 1.4 km strip where the wall once stood, and an observation deck allows you to view the last fully preserved section of the Berlin Wall. 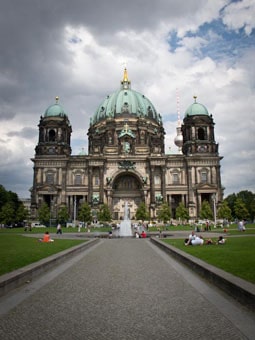 Catch the U8 at Bernauer Straße and travel south to the main transport hub of Berlin, Alexanderplatz. The ‘Alex’ is a central square in the Mitte district, where you can behold the GDR-commissioned Fernsehturm (TV Tower) and Weltzeitur (Worldtime Clock).

Next, make your way west on the S-bahn to Hackescher Markt – a popular square humming with restaurants, boutiques and markets. You won’t find big shopping malls here, instead famous labels and new, young local designers.

A leisurely 5-minute walk will bring you to the River Spree and Museum Island, where you’ll find some of Berlin’s grandest buildings, including the majestic Berliner Dom (cathedral) and five internationally recognised museums. 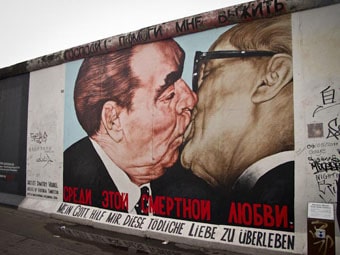 Pop back on the S-bahn, and travel to Ostbahnhof, where you’ll find yourself but a few minutes walk from the Eastside Gallery. A 1.3 km stretch of the Berlin Wall, it’s the world’s largest open-air gallery and an ode to freedom.

Among the art works is the “mortal kiss” painting of two old Communist leaders sharing a passionate kiss. The walk along the Eastside Gallery concludes at the stately Oberbaum Bridge where you can catch the sun setting over the city skyline.

Enjoy your time in Berlin!